It appears that yet another deadline to complete the Bay Bridge bike path will be missed, as the San Francisco County Transportation Authority is predicting that the long-overdue pathway connecting the East Bay to Yerba Buena and Treasure Island is not expected to open until summer of 2016. This is an update from the most recently stated goal of early 2016. Instead, cyclists will continue to enjoy the current experience of riding almost the entire way from Oakland to Yerba Buena only to have the bike path abruptly end 568 yards shy of the island.

For those riding the partially completed path for the first time, the experience can be a jarring one. Picture riding a brand new and spacious path over the San Francisco Bay for almost two miles only to have it, seemingly randomly, end.

The Chronicle notes that many in the Bay Area cycling community refer to the incomplete path as “the world’s longest bike pier” and “the bike path to nowhere.”

Why couldn't the path just be completed along with the original construction? It seems that certain structural elements from the old eastern span were in the way (they're going to detonate at least one of those this weekend). Once those obstacles have been removed, completion of the bike path should resume.

This is at least the third delay on the project, with a number of issues to blame, from design to materials. And at least some cyclists do not seem angered at the repeated delays, rather they appear sadly accustomed to the slow-moving work of Caltrans.

Joe Tornatore of Piedmont told the Chronicle that he is “not shocked, outraged or surprised" at the delay. "It seems like just another one of those projects that just never gets done," continued Tornatore. "It’s unfortunate, but it’s just a way of life in California.”

Even when the eastern span bike path is completed (hopefully) next summer, cyclists will still not be able to ride from Oakland to San Francisco as the western span remains pathless. There is no concrete plan to change this, no design, and there is no funding either.

Also, once the bike path lands on Yerba Buena Island next year, the path down to Treasure Island will remain a treacherous, highly trafficked one, along Hillcrest Road and Treasure Island Road, for a couple of years until a permanent, direct bike path can be built along Macalla Road. 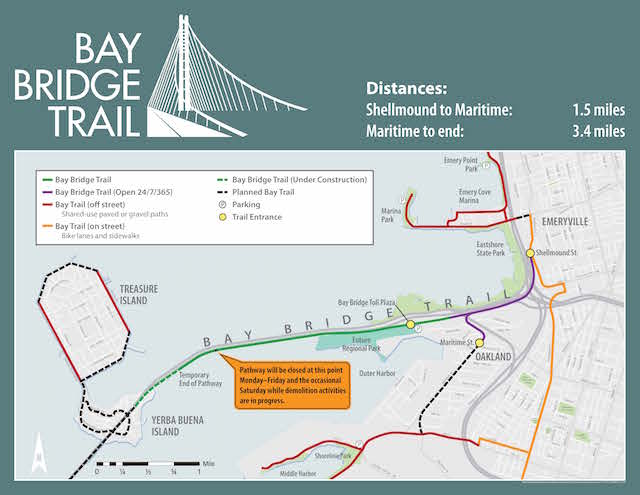 Want to taste the talents of chef Christopher Kostow but can't afford the mint that would take for an evening at Meadowood? Well, then you're in luck as the two-person team behind Napa's

As SFist has been trying to tell anyone who'll listen, despite the fact that we aren't even reelecting Nancy Pelosi in this one and the mayor pretty much has it in the bag,