If trends as we know them continue, the Budget and Legislative Analyst’s Office predicts that, as a proportion of the Mission District, the percentage of Latinos will decline from 48 percent in 2009-13 to 31 percent in 2025.

The Examiner has the report, which relatedly predicts households earning more than $150,000 will increase in the neighborhood while those receiving between $35,000 and $99,999 will decline. At the same time, the number of households with children is likely to decrease from 21 to 11 percent.

Contextualizing the report, the Chronicle points to last month's study from the City’s chief economist, Ted Egan, commissioned/encouraged by opponents of Prop I, Supervisors Scott Wiener and Mark Farrell. Of Prop. I, the hotly debated ballot measure that would halt market-rate housing in the District for at least 18 months, Egan concluded that "[a] temporary moratorium would lead to slightly higher housing prices across the city, have no appreciable effect on no-fault eviction pressures and have a limited impact on the city's ability to produce affordable housing during the moratorium period."

That led Supervisor David Campos, architect of the Mission moratorium, to hit up his ally in City Hall at the Budget and Legislative Analyst’s Office to create two-, five- and 10-year sets of projections for the Mission’s racial and economic make-up. 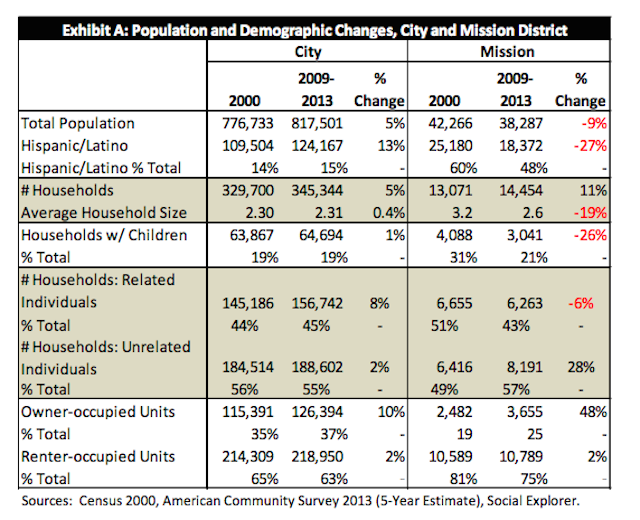 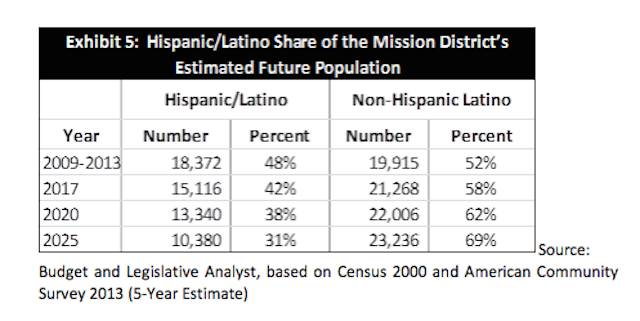 Campos is quick to sound the alarm he's been sounding all along. “What this report found is actually very alarming,” he said. “It essentially means... that we would lose this neighborhood as we currently know it.”

So, what's to be done? Analyzing the number of new housing units necessary to lower housing prices in San Francisco led to some heartbreaking figures. In hindsight, for San Francisco to be in line with the rest of the country's rate of housing appreciation, we should have built 459,000 units between 1980 and 2010. But instead, 60,344 units were built. Going forward, from the report:

To put it as Campos has, “We would have to build another San Francisco on top of this city today." To the Chronicle, he added that “If the status quo continues, we will lose the Mission as we know it." But, he said, "Building more housing is simply not going to solve the issue when what we need to build is another city on top of this one. That is not a solution that is workable for the Mission.”

Instead, said Wiener, "We don’t need to build an entire new city to improve housing affordability. The last thing we need is to stop creating housing.”

A family was held up yesterday afternoon morning in the Mission by two suspects brandishing knives. The man, woman, and 2-year-old were near the corner of 29th Street and San Jose Avenue when

Hey, guys, remember the halcyon days of January, 2000, when a bunch of dot com companies dropped scads of money on commercials that would run during the Super Bowl? One current-day dot com