Claiming that developers and the city have teamed up to fast-track a massive, improperly zoned SoMa development on 5th and Mission Street, a group of protesters gathered this morning at the San Francisco Planning Department to file an appeal of the 5M project. The appeal, put together by the South of Market Community Action Network (SOMCAN), asserts that the approved construction within the SoMa Youth and Family Special Use District ignores long-term community planning efforts and will lead to the displacement of vulnerable area residents.

The proposed development at 5th and Mission, which has the vaguely annoying name of "5M," is the work of Forest City Development and is quite huge. At issue for SOMCAN is that the bulk of the project consists of a 470-foot-high luxury condo tower that will be entirely market-rate units, and two 400-foot high Class A office towers.

They seem unappeased by the 58 affordable units that will be built onsite in a different building, or by Forest City's pledging $24.5 million to build an affordable senior housing complex nearby at 967 Mission Street, or the additional $18.5 million that Forest City is giving to the Tenderloin Neighborhood Development Corp. "to help pay for a 100 percent affordable 103-unit family apartment complex at Taylor and Eddy streets," as the Chronicle reported last month. The project got its approval from Planning in September despite plenty of public comment from hundreds of community members who showed up to debate it.

Here is the currently proposed project, with captioning courtesy of SOMCAN, a group that bills itself as "a coalition of community members and legacy organizations." 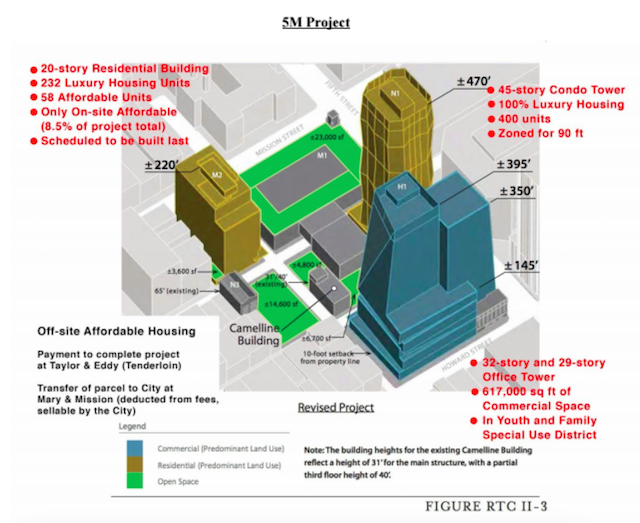 As reported by the Chronicle, the team behind 5M has always had big ambitions for the project, designing their buildings outside of existing zoning constraints.

The 5M proposal far exceeds the current height limits on the block, which range from 40 to 160 feet. The developers — who say that the current architectural concepts will continue to evolve — have applied to the city to create a special-use district that would address zoning and design issues and community benefits all at once.

In a second press release sent out this morning, SOMCAN director Angelica Cabande challenges the certification of the project's Environmental Impact Review and claims that the developer's successful efforts to alter the site's zoning have resulted in an illegal exception to the aforementioned SoMa Youth and Family Special Use District.

The coalition is appealing the certification of the Environmental Impact Report (EIR), the conditional use approvals and the office allocations associated with the project and will oppose several recommendations for approval that were sent by the Planning Commission to the Board of Supervisors. The deficient EIR fails to analyze and fully disclose substantial project impacts relating to cumulatively considerable impacts, massing and height, traffic, pedestrian safety, open space, shade and shadow effects, wind, inconsistency with area plans and policies, and violations of the General Plan. The description of the project is inadequate and incomplete, and was misleading and inconsistent from the start.

As explained by the San Francisco Panning Department, the SoMa Youth and Family Special Use District was established in part to "to address youth and family concerns and expand affordable housing opportunities."

In an editorial published in the Examiner this past September, an opponent of the project argued that the development would lead to yet another round of displacement in the San Francisco Filipino community.

Filipinos were first displaced from Manilatown, adjacent to Chinatown, starting in the 1960s, culminating in the evictions from the International (“I”) Hotel in 1977. In 1967, the Redevelopment Agency moved 4,000 people, many of them Filipinos, out of the Yerba Buena area. The displacement from Chinatown and Yerba Buena created a new Filipino community in the area of SoMa that was designated as the Youth and Family Special Use District during the Eastern Neighborhoods rezoning of the 2000s.

At today's protest, a new vision of the project was unveiled by those challenging the project. The following "community vision" was presented by members of SOMCAN. 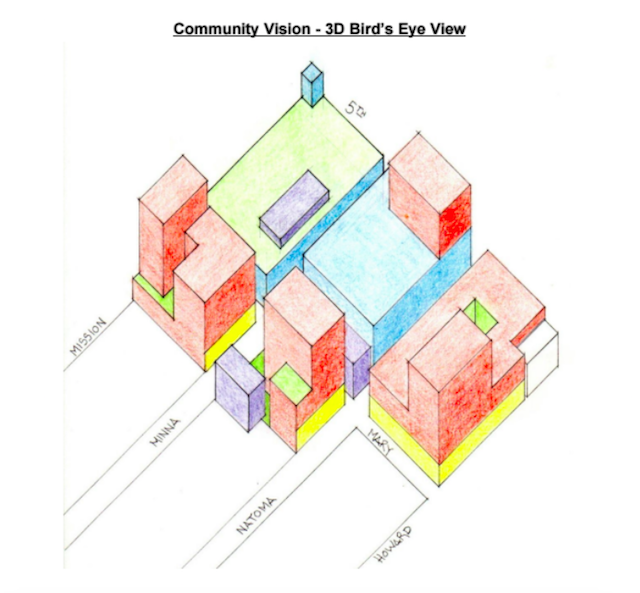 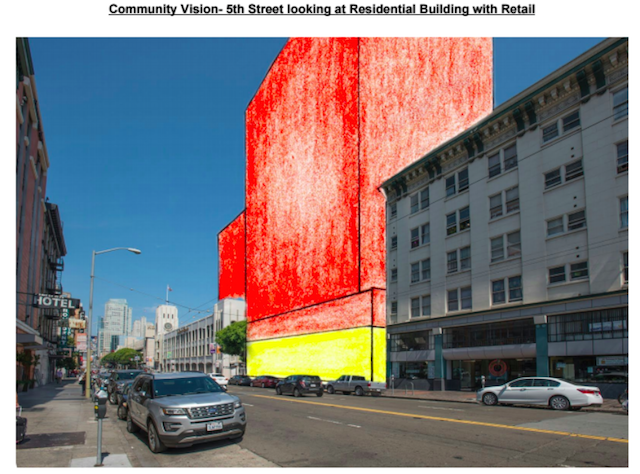 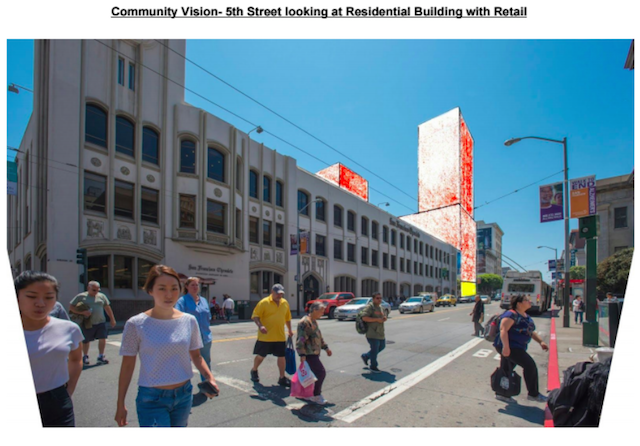 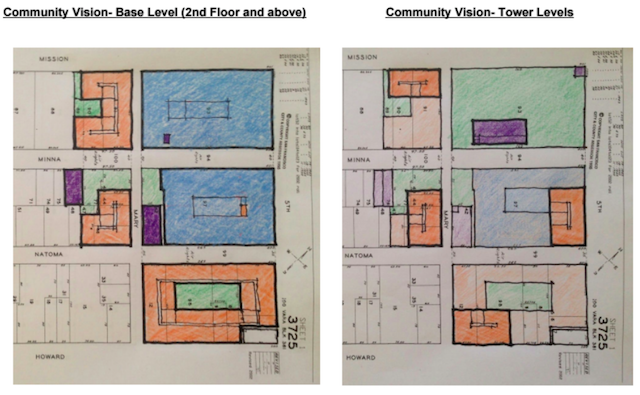 You know how Southern California got that drenching last week? Well, it may be our turn as soon as two weeks from now, according to a climate scientist at the National Oceanic and