The Halloween haunted house event this year, which runs through Halloween night  the very last tour is actually is at 12:30 a.m. on November 1, and I pity the fool who is there and intoxicated  is being produced by the group who's done Halloween "experiences" in New York and L.A. under the name Blackout. Unlike last year's more performative, semi-interactive theater experience done by a different production outfit, this one is short on costumes, lighter on the fake blood, and more likely to make someone in your group piss their pants, cry, or have a panic attack.

Below, a few bits of wisdom and advice, kind of like I offered last year, only, like I said, if you went last year you will not be prepared for what you face this year. Be warned.

1. There could be some standing around to start. Going to anything on opening night means there will be glitches, but the experience this year appears to be designed with smaller groups in mind. There is both an upstairs waiting area, in the now brightly lit Drill Court of the Armory, and an antechamber in the basement where groups will be corralled and allowed into the "inferno" in small groups  ours was four people, but it looked like six or seven was likely the max when it came to traveling the maze.

2. You'd better not be claustrophobic, asthmatic, epileptic, or have any history of seizures or serious panic issues. There is an intimidating thing they do at the beginning, with dudes in black shining flashlights in everyone's faces and asking you a few of these medical questions, but they're not fucking around. In particular there are two parts of the experience that could seriously result in panic, or seizure, should you be prone. (And yes, one involves an intense strobe light.) 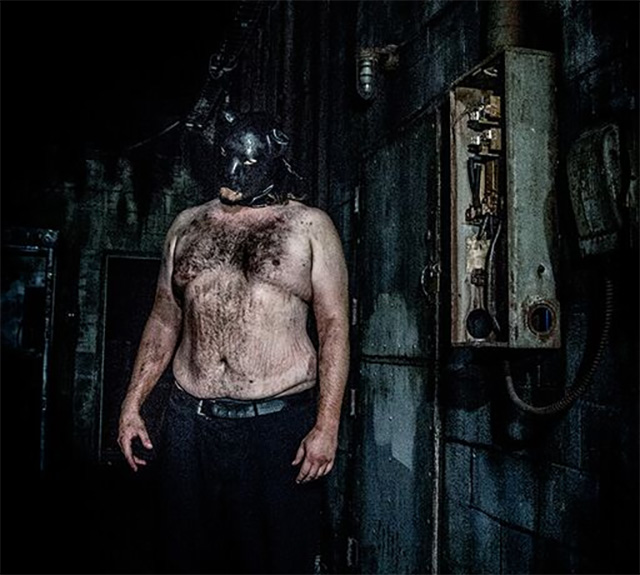 4. Don't listen to the coat check lady when she says there's no "splashing" or risk of clothing stains. That turned out to be a complete lie. Much like last year, there are several moments when your clothing will be at risk of getting dampened, or at the very least having body makeup rubbed upon it. Do not wear anything valuable, and/or check your valued items at the door. (See above about possible urination risk.)

5. Again, your Christian cousins in town won't like this one either. There is at least one nun, and plenty of pagan/scary stuff around. You don't want them thinking that all we do in San Francisco is mock the Catholic church and smear blood on each other. 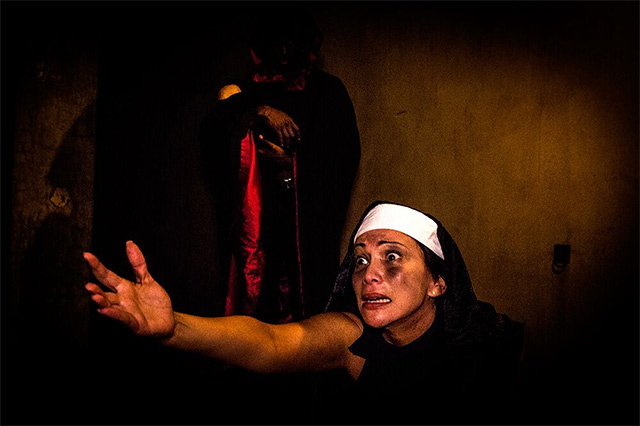 Courtesy of 'Hell in the Armory Presents: Inferno'

6. The concept this year is based on Dante's Inferno, but that's pretty loose. There's a quote or two employed, like this one, and maybe there's a room based on the circle of hell for the insane? But otherwise it's just a framework and this is just a sparsely populated, scary-ass basement meant to make you think you walked into a horror movie.

7. You will be thrust in darkness, screamed at, pushed, and touched a lot. Like in a strip club, you're of course not allowed to touch the actors, but they are going to touch you. Sometimes it won't be pleasant. I was lightly groped (above the waist), shoved, and mildly assaulted with a substance I won't get into. And rather than play-act some bloody BDSM-style action the way last year's Hell In the Armory crew did, these people are trying to hard to freak your shit out  it also goes by very fast, and you're out in about a half hour. There is less watching, and way more running and cowering in fear in this one  and I say that from a place of jadedness in which I really thought I was beyond being able to be this scared by what's essentially a piece of theater.

But as you can see from the 2014 Blackout video trailer below, this type of Blair Witch, toss-you-in-a-dark-room kind of fear tactic really sort of works! My friends and I were laughing part of the time, no doubt, but we were also alternately screaming, retching, and sincerely trying to get away from some of these freaks as fast as we could.

Courtesy of 'Hell in the Armory Presents: Inferno'

“The music of the church reveals the life of the church, the enthusiasm of the church,” Michael Wright, an Oakland pastor, tells CBS SF. But that's not how it's seen, or heard, by

Yesterday was a big day for advocates of Proposition I, otherwise known as the Mission Moratorium, as proponents of the controversial measure took to the steps of City Hall to make their case