Lots of people have lots of memories of cheap apartments and cheap burrito dinners in the Mission of the 1990's. And while there have been eras of relative stability in San Francisco when it didn't feel like there was a well heeled horde of transplants vying for every last charming garden studio and every table at Tosca Café, there have been multiple times in SF's past when people from without were clamoring to get a foothold here, and driving up the price of everything in the process.

Being a relatively small city with specific geographic constraints and development patterns that has been historically prone to boom-and-bust cycles, one can trace SF's economic tensions and sky-high prices well beyond five or even fifteen years ago. At the risk of drawing the wrath of those who believe SF has long been more affordable than it is now  which, in some ways and in some neighborhoods like the Mission, it was in our recent history, at least if you go back 20 years  SFist is going to explore some facts and figures from the city's past, anecdotal and otherwise, that may offer a smidgeon of comfort to everyone who feels like they've arrived at the worst possible moment, when everything is more insanely expensive than it ever has been here. In truth, it has been both better and worse, due to many factors, not the least of which has been supply and demand.

The Gold Rush and the 19th Century

If you think land values and food prices are crazy in the city now, it's educational to glance back at the chaos of real estate and the scarcity of goods in the early years of San Francisco. The Smithsonian Magazine just published an excellent piece on this topic, finding written records of the ways that miners and other early arrivers to town were being gouged for the simplest food items like bread and eggs. There have been many accounts of eggs being sold for a dollar apiece, with a dozen eggs costing roughly $90 in today's dollars in 1849 SF. Canteens reportedly would charge a dollar for a slice of bread too, $2 if it was buttered, which would be $56 in today's terms. Edward Gould Buffum writes in Six Months in the Gold Mines (1850) of a breakfast for two consisting of bread, cheese, butter, sardines and two bottles of beer for which he was charged $43, the equivalent of a $1,200 restaurant bill today.

It's often been said that most of San Francisco's early millionaires were not the prospectors but the people who sold things to them, like German-Jewish immigrant Levi Strauss who figured out that everyone needed tough, rugged pants in the gold fields.

And when it came to real estate, prices were way more insane in the years just after the Gold Rush. As writer Bayard Taylor, who penned dispatches about the Gold Rush economy for the New York Tribune, tells it:

[One] citizen of San Francisco died insolvent to the amount of forty-one thousand dollars the previous autumn. His administrators were delayed in settling his affairs and his real estate advanced so rapidly in value meantime that after his debts were paid, his heirs had a yearly income of $40,000 [$1.2 million today]

That means his property alone sold for the equivalent of several million dollars, even though the man himself believed he died in great debt.

A recent history of Alamo Square on Hoodline describes the land-grabbing and real estate squabbles that were going on in the area between the 1860s and the 1890s, when Alamo Square Park would finally start to take shape, alluding to the high value of land in the period. And by 1897, millionaires were building mansions like this one by the park.

And does this sound familiar? The excerpt below is from a 1930's history book about the Gold Rush years.

Yet again, as the city recovered from the 1906 earthquake and subsequent fire, those whose homes were luckily not completely burned down found that their landlords weren't going to let them back in from the refugee camps where they found themselves without paying higher rent  in some cases double.

As the San Francisco Call reported in July 1906, "These persons say they are not paupers; that they are earning as good wages as ever they did, but they are unable to pay the increased rent. As a result they resort to the camps." 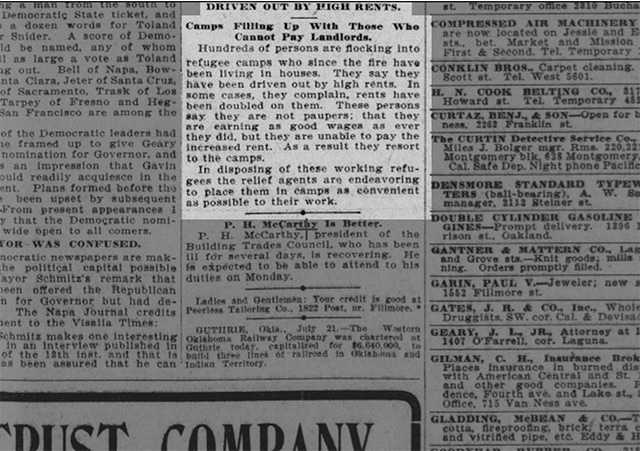 Housing became much more expensive and harder to come by in the years during and after the Second World War, due to an abundance of job opportunities, and it's clear from census data that the city's population was largely middle and upper class. The population boomed in these years while the city was a lot less dense in terms of building heights and in-fill development than it is now, leading to high demand.

And the people of San Francisco in 1950 weren't poor, on average. The median family income for the city was almost $4,000, 21 percent higher than the national average. While only 8 percent were college educated at the time, 22 percent listed themselves as professionals, executives, or managers, while another 22 percent worked in clerical or administrative jobs.

Writing in his San Francisco Book in 1948, longtime Chronicle columnist Herb Caen wrote of the booming city that its "two great problems" were "housing and traffic," (see the photo above from 1946) complaining of landlords gouging people for substandard housing. "Even a couple of rooms in a basement bring seventy-five dollars a month," he wrote.

And as for the newly built areas filled with shiny offices and such, he wrote, "the dyed-in-the-fog San Franciscan isn’t at all sure he is happy about the newer sections of town."

Dips in the population, urban flight, and a decaying Edwardian housing stock  much of which was built between 1907 and 1910 and was in great disrepair by 1970, when areas like Alamo Square were extremely "low-rent" and dilapidated  may have made life cheaper for the hippies, but that all began to change by the early 1980s. It was then that you saw the preservation movement and savvy investors fixing up many of the Victorians into the multi-million-dollar properties they've become today.

Also, the industrial areas of SoMa, beginning to be redeveloped as Yerba Buena Gardens and the Moscone Center, started to become less desolate and more desirable as arts and living space. You can look no further than this photo caption from a recent exhibit about SoMa in the late 70s and early 80s by photographer Janet Delaney. It describes a couple of artists, Perry Lancaster and Jill Scott, who in 1981 are talking about the precariousness of their living situation on Langton Street. 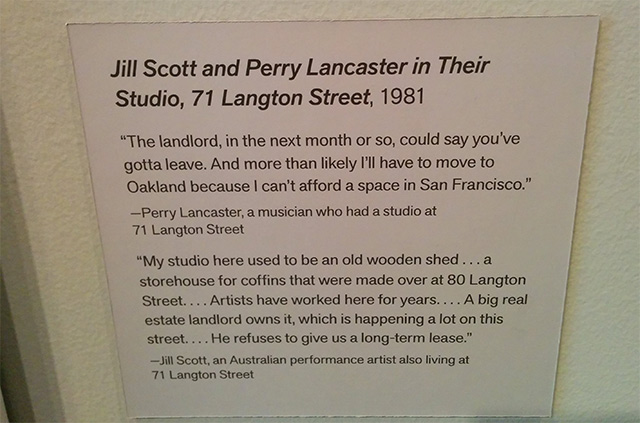 The Mission, as you likely know, was once an Irish and Italian neighborhood, and during and after World War II it gave way to a wave of Latino immigration from across Latin America, some of whom moved families here to become shipbuilders and others just to profit from the city's booming economy. The 1960's and 70's also saw a wave of immigration to the 'hood from El Salvador following political oppression in that country.

Local architect Joelle Colliard, who was arguably part of the "first wave" of gentrification in the Mission circa 1995, remembers the huge, 1500-square-foot, three-bedroom flat at 24th and York that she shared with two friends that cost them $1200 total. "We each paid $400. That was how the world used to turn," she says. That all ended with an ownership change and spurious owner move-in eviction during the boom in 2000, and the rent for that unit was allegedly hiked to over $3000.

Local nurse Jason Overcash remembers a huge studio facing Alamo Square going for $650/mo in 1995, which was $50 more than he could afford.

I, myself, moved to the Bay Area from New York just as the last boom was winding down, in late 2000, with no savings and no parental support. An initially easy-to-get job led to my first layoff, funemployment, and learning the ropes of the unemployment insurance system, but luckily I was sharing a loft in Oakland where we'd had to build out all our own rooms, paying $700 a month to share one bathroom with three other people. I can recall around 2002 visiting a friend's Nob Hill studio that was going for $1,575 a month, and that felt well beyond reach.

I wouldn't decide to move into San Francisco until 2005, at which point I couldn't afford to live anywhere decent on my own, and tired of roommates I settled into a spiffed up SRO on Market Street that was being marketed to students at the Art Institute and elsewhere, where I paid $625 a month to share a bathroom with an entire hallway and live in less than 300 square feet. My neighbors were non-profit workers and artists, many of them pretty young. At the time, even that was an unheard-of deal.

Still, having visited New York regularly, the $9 cocktails you could get here were already going for $12 or $14 there, and people had lovely, rambling, big apartments in historic buildings for way less than anyone paid for the equivalent amount of space back east, so SF still felt a bit like a deal.

All that has changed, of course, and there are pretty much no more deals.

I know one person who managed to find a nice big room this year for $1500 in a four-bedroom place in the Castro, and I know that I also just saw a room being advertised in Corona Heights in a beautiful, remodeled four-bedroom, with a view, for $3350.

But, the point is, while we are in a crazy moment, it might feel less crazy soon, or in a few years. Maybe something terrible will happen and everyone will leave, and it'll be like 1967 again with tons of empty space to rent  but even then, a lot of those under-employed hippies lived in communes.

Looking at the long view, it has been crazy before, and it will be again. Because San Francisco is a place that people flock to, and want to be, and it's going to take more than just a big earthquake to change that.

Related: Video: Remembering The Population And Construction Boom Of 1960s
San Francisco's Population Boom and How It Impacts You

Today in San Francisco Superior Court, Julieta Yang, a 45-year-old mother of three from the Philippines filed a lawsuit alleging years of sexual abuse and wage theft as a live-in domestic worker for