"Brothers and sisters," Mustafa Khan addressed his would-be parishioners in a would-be church on Valencia Street, the mortuary-turned-venue appropriately known as The Chapel.

"We are digitally connected," he vamped with the vocal inflections and pregnant pauses usually reserved for black baptist preachers, "but we are personally disenfranchised."

Among the audience of 130 mostly white, mostly young atheist worshippers, some fanned themselves ironically or let out an "amen." In a nod to the name of the event, a few dozen arrived in their "Sunday's Finest": Hats and gloves the likes of which are rarely seen outside of Southern Baptist or horse-racing circles — save, it would seem, for the occasional Valencia Street costume shop.

Khan explained the idea for Sunday's Finest, a "whacky fake church service," to SFist before taking his pulpit in shiny gold Betabrand robes. It's to "take some of the elements of church that are really powerful." Add to that mimosas and a $10 to 15 ticket, which might be thought of as a collection.

"I've been fascinated by the concept of church and what it does for some of my friends," says Khan, a professional events planner and emcee who also organizes "Midnight Brunch" and the San Francisco chapter of the popular morning dance party "Daybreaker."

Khan has worked at an education startup and was a "relatively early" employee at Facebook, though he assures me he wasn't depicted in the movie The Social Network. Now he clearly wants to make his mark on San Francisco's social scene. "I've been super inspired by lots of different events here," he tells me, "Whether it's Bay to Breakers or going to Dolores Park on a Sunday. It's all these different experiences that have motivated me to contribute to the city that we live in: To the culture, the interesting, vibrant culture." 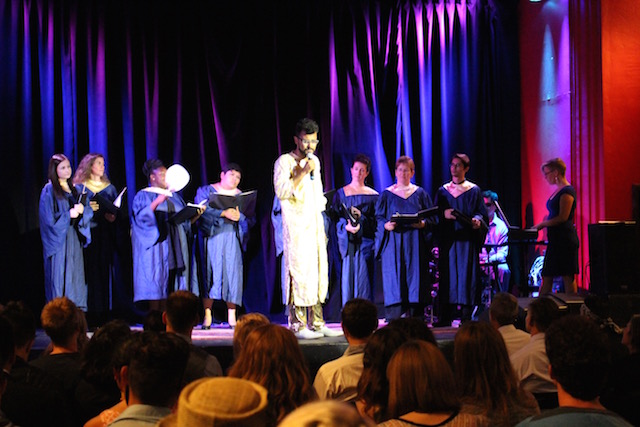 The Sunday's Finest Service, which lasts about an hour-and-a-half, intersperses speechifying with bursts of performance and is entertaining throughout. A mixed-race gospel choir sang a stirring arrangement of "Eye of The Tiger," and at the first service a month or two prior, they performed a version of a Diplo song that the musician himself highlighted on Twitter.

An ex-southern woman sitting next to me with an arm in a sling said the service, which she'd attended the first go round, was "so San Francisco." Her injury? It wasn't real: She was "healed" by Khan before taking the stage to perform some genuinely impressive acrobatics.

First, though, Khan ministered to another audience plant in mock distress. "I want an iPhone 6S," moaned a man in boat shoes, shorts, and a bowtie, "but I'm not eligible for an upgrade."

How did Khan save the poor man's soul? He recommended T-Mobile — and the crowd went wild.

But these were the moments where Sunday's Finest felt truly sort of blasphemous, or just plain insensitive. It wasn't in mocking the mechanisms and hypocrisies of the church, which are ripe for parody, but it was minimizing the real struggles that bring so many Americans together in worship and solidarity — some just a block away at the many storefront iglesias on Mission Street — that felt really irreverent. 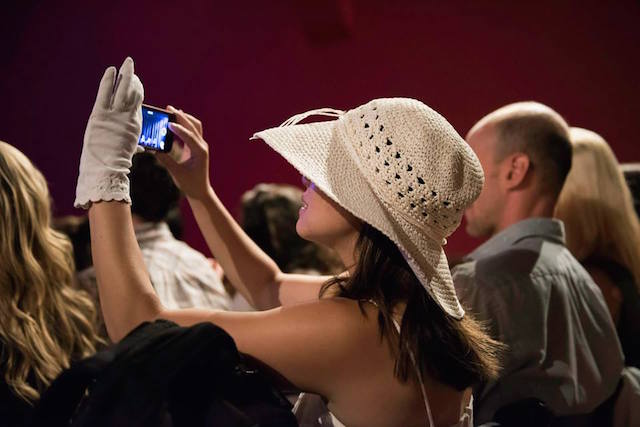 Even as a brand of self-deprecating humor ("the struggle is real," you guys), the equating of objectively unequal struggles rang cheap and hollow, especially when presented in the unmistakable tenor of the black church, a rhetoric of real adversity. When the room at the Chapel sang "Amazing Grace," it was impossible not to be reminded of the moment when, after a white shooter killed nine people at a historic black Church in Charleston this past June, Barack Obama led thousands in the same song. That moment, it seemed, was right for the gospel mode.

Over a Bloody Mary before the show at the Chapel bar, a friend of Khan's filled me in a bit. "Mustafa is what I would call a nouveau socialite," said artist Harrison Love, "He's the master of ceremonies." The pair connected two years ago when Harrison moved to San Francisco and attended one of Khan's in-crowd house parties off of Clarion Alley. Finding himself lost among the murals, Love felt inspired and at home. "Mustafa kind of instilled this idea in me that if you put enough people with a good background together in the same room, then that's good business. Because it's getting so expensive, there's a concentration of creative individuals, and everyone knows everyone." 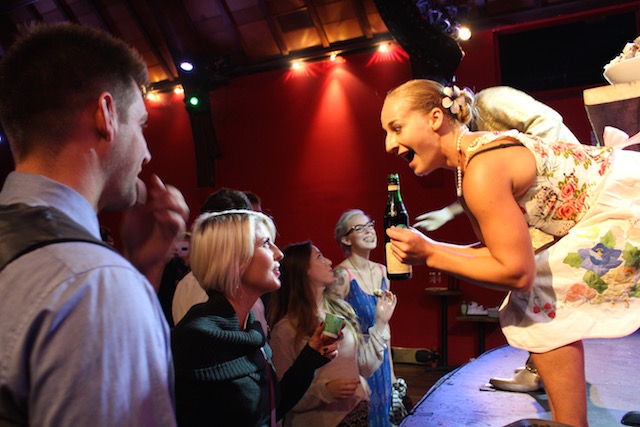 To the delight of the congregation, communion was held with Tartine Bread and Fernet shots. The group was united in laughter, however briefly, as the "prophet" Taylor Swift and her "Shake It Off" benediction were invoked.

Heeding the sacred Swift, I walked a few blocks away to where another group of church-inspired ironists, The Sisters of Perpetual Indulgence, were shepherding their flock. The Sisters, who have perfectly pilloried the church since 1979 with events like their Hunky Jesus male-beauty pageant, have so much bite because they've got real political causes. They're not just appropriating aspects of the church — they're taking them on.

The occasion that same Sunday? The Folsom Street Fair, of course, where the Sisters asked for donations and there truly was no God.

Related: Bro-Down For The Dude Crown: Scenes From The Mr. Marina 2015 Competition

Be it EaDo in Houston, NuLu in Louisville, DUMBO in Brooklyn, DTLA, or our very own NoPa and SoMa, rapidly gentrifying, expensive loft-filled neighborhoods nationwide are one and the same in many ways,

San Francisco State University Police are seeking an "unknown man" after a woman was attacked in a seemingly-random case of sexual battery on campus, at least the second such incident this year. According

—
Sunday's Finest: A Non-Religious 'Church Service' With Tartine Bread And Fernet For Communion
Share this