27-year-old Antonio Ramos was painting a community mural under an Interstate 580 overpass in West Oakland on Tuesday when he was shot at around 10:30 a.m., according to Police reports.

Spokesperson Johnna Watson tells the Examiner that Ramos, who lived in Emeryville, was taken to a local hospital and pronounced dead. The East Bay Express and others reported the circumstances of his death yesterday.

The suspect, who engaged Ramos in an altercation, fired his weapon, and walked away, has not yet been apprehended.

The painting, known as the Super Heroes Mural Project, is the work of the Attitudinal Healing Connection (AHC) of Oakland. The arts nonprofit seeks to empower individuals and break the cycle of violence in communities through creative work.

As the Chronicle writes, the superheroes project pairs AHC professional muralists such as Ramos with local middle school students, envisioning them as superheroes.

Oakland Police Chief Sean Whent called the shooting “really tragic” and “totally unacceptable." He mourned "someone who was trying to make a positive difference in this city and lost his life.”

Ramos' aunt, Margaret Holappa of Hayward, remembered her nephew. “He was a good kid, and this was his love,” she said, crying. “He was always willing to help out.”

A rendering of the completed mural shows a child wearing pink among colorful houses and birds in flight. 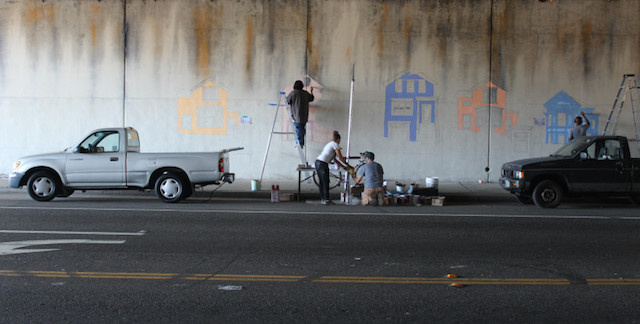 The Super Heroes Mural Project held a candlelight vigil at this morning at the mural and a fundraising page for Ramos' family's expenses has been launched.

As ABC 7 reports, the shooting was the second disturbing death of the morning within a small radius. Less than three hours prior, a body wrapped in plastic was discovered along Union Street near 26th Street.

Another day, another story of conflict between a cyclist and a driver, I guess? Today's tale in this city battling over regulations for bike riders involves a Cadillac, an allegedly sideswiped cyclist, and

When real estate industry website Trulia set out to map the noisiest neighborhoods in San Francisco, they did so by pulling "about five years" of "police data on noise complaints," they say. But