With the goal of expanding the Central Subway project from Chinatown to Fisherman's Wharf, an oft-cited item on the SFMTA's future project "wish list," Supervisor Julie Christensen is pushing the City of San Francisco to purchase land at the intersection of Columbus and Powell in her district. The former home of the now-razed Pagoda Theater, the site was used as an exit point for the Subway project's tunnel boring machines, but as Hoodline first reported, plans are in motion to break ground on the site for luxury condos as soon as November. Now things are heating up, the Examiner reports, with Christensen redoubling her efforts to claim the property for the City, a move she cites as important to the subway's expansion. She's now asked city government’s Real Estate Division to re-assess the property.

“We are lighting bonfires under their fannies,” Christensen said. “I’ve finally gotten a lot of people to share my sense of urgency.” Christensen is joined by vocal "let's always be building a Subway" advocate Supervisor Scott Wiener, who writes to Facebook "I'm proud to join my colleague Supervisor Julie Christensen to co-sponsor her initiation of the process to purchase a critical site in North Beach to preserve it for a future North Beach subway station for the extension of the Central Subway...We can't afford to lose this site to condo development."

Wiener seems to see the site as a potential station option, perhaps with affordable housing built on top of it. Christensen doesn't seem to be so explicit, but clearly agrees overall. “I believe the loss of the Pagoda [property] would make construction really difficult,” Christensen previously told the Examiner

According to SFMTA documents, the cost of the Central Subway to Chinatown totals $1.5 billion, and the extension to Fisherman's Wharf could incur costs between $643 million and $2.6 billion. But the SFMTA doesn't appear nearly so keen on purchasing the lot. Responding to FAQ "Will the Pagoda Palace site be used for any Central Subway construction other than constructing a retrieval shaft, removing the TBMs and restoring the site?" that organization writes "No. The SFMTA has signed an agreement with the Pagoda Palace property owner to utilize the site for two years. In that time, our contractor will demolish the existing building, construct a retrieval shaft for the TBMs, extract the machines, and restore the site. After the lease period is complete, no further Central Subway construction is planned to occur at the Pagoda site." 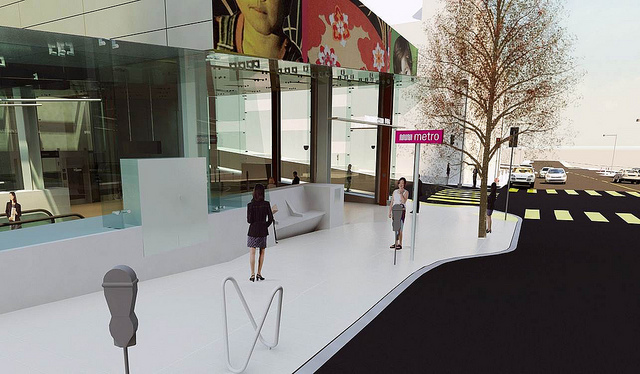 In fact, the real estate broker for the site’s owner said shovels could dig in as early as this November, with plans calling for a development with 19 luxury condos, a 4,700-square-foot restaurant, and underground parking. City approvals are set, the broker said, "We’re just waiting for a permit to be approved at the Department of Building Inspection, and we’ll be in," he said, adding that neither city officials nor the SFMTA made offers for the property. The Pagoda Theater site was purchased for $4 million in 2004, and its owner has reportedly been offered "well above $10 million on the property in writing” since that time.

Another option the Examiner invokes is eminent domain, as backed by neighborhood advocates like Stephen Taber, an attorney and founder of San Francisco Next Stop founder, a local group advocating for the Subway's expansion. “I think this is an important enough project that it’d be worthwhile pursuing eminent domain,” As he explains, “It has to be sold [to The City] for fair market value, which is what a willing buyer would pay a willing seller in the open market.”

There may be a serious problem with the fact that Levi's Stadium sits in the flight path of San Jose Mineta International Airport, and it's about the high-tech scoreboard which shines like a

This Friday is the first Critical Mass bike ride since August's road rage altercation, but this month's riders have even more to deal with than increasingly negative public perception of their event: Legions