A good wine store requires several things: broad selection, outside-the-box options, value, convenience, and knowledgable, unpretentious staff. When it comes to wine, the quality and broadness of the selection might be subjective, but a well curated store with a staff that can guide you through it is a serious amenity in any neighborhood, because otherwise you're stuck with dusty, corked bottles from the corner store, or you're trawling through BevMo without a clue. Below, SFist's picks for the dozen best and best-loved wine shops around town, some of which even boast their own wine bars inside, for immediate tasting.


Arlequin Wine Merchant
If you've got your eye on a bottle at this Hayes Valley wine merchant, it's well worth the corkage fee. That's because, if you don't snag the one table within this small storefront next to the associated Arlequin Café, you can sit out back where a lovely garden patio awaits. Their staff — Ian Becker and Gretchen Buck — are there to make sure you get your best, and yes, that's a whole wall of wines under $15 to choose from. —Caleb Pershan
384 Hayes Street between Franklin and Gough Streets 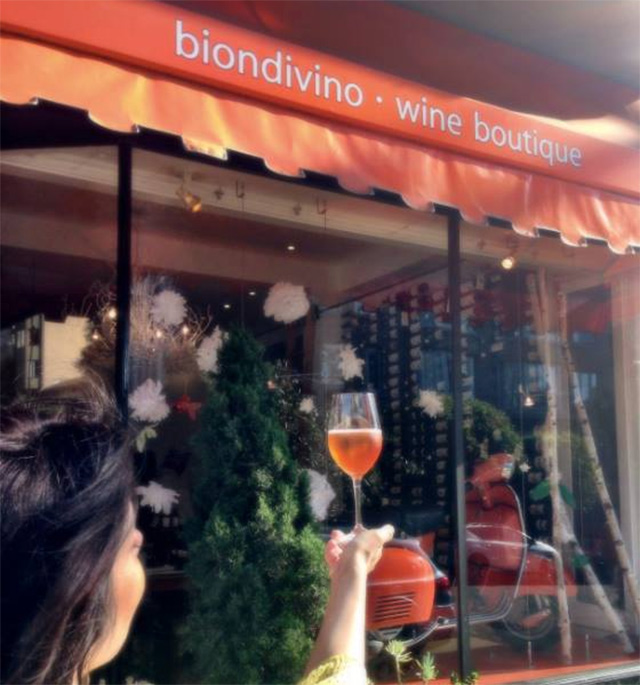 Biondivino
This Russian Hill gem of a shop, with a focus on small-production Italian wines and Eastern European oddities is an obvious labor of love for owner Ceri (pronounced like Carrie) Smith. She was named one of Food & Wine's sommeliers of the year in 2014 for her work designing the list at Tosca, and she remains one of the city's most affable and passionate wine geeks. This is a store you go to with nothing specific in mind, and where the staff (perhaps Smith herself) will point you to things you've never heard of that you'll immediately love. Also, they host regular tastings with winemakers, and if you're hunting for orange wine, prosecco, or a perfect Etna Bianco, this is where to come first.  Jay Barmann
1415 Green Street near Polk 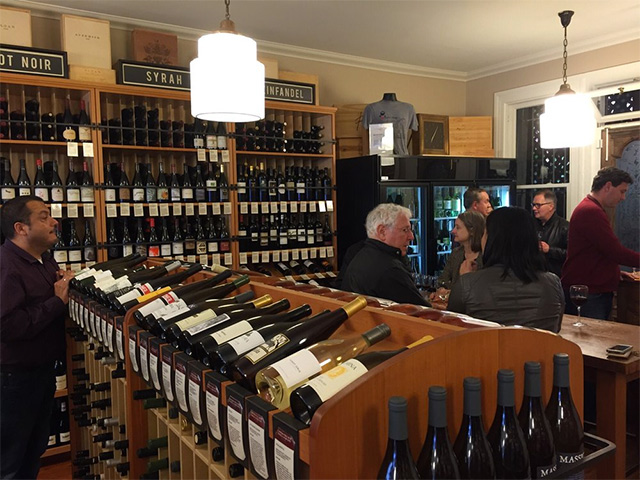 Castro Village Wine Co.
Tucked up on 19th Street away from a lot of the Castro foot traffic is this fantastic neighborhood wine shop has been around since 1978, specializing in small-production California wines  and having been one of the first stores in the city to do so, it has established long and deep relationships with California wineries. There's always an interesting, rotating array of whites, reds, and rosés to look over, and there are plenty of bottles that clock in under $20, making this place a far superior alternative to grabbing a cheap bottle from a corner market on the way home. But there are also plenty of higher end California reds to impress your next dinner party hosts, including a large selection of Pinot Noir. The staff and owners are also extremely attentive, knowledgable, and friendly. Added bonuses: a small wine bar at the back that hosts weeknight and weekend tastings of all kinds, and a big selection of high-end bourbon, Cognac, and other booze.  Jay Barmann
4121 19th Street near Castro 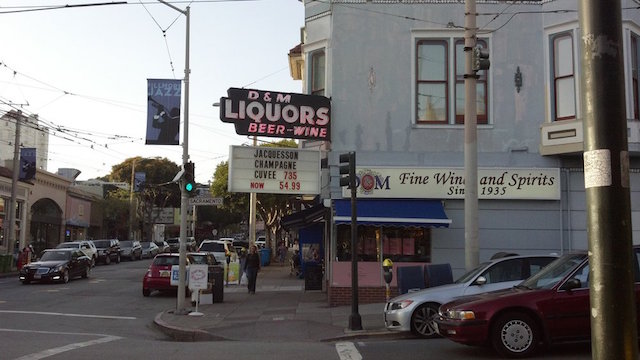 D & M Wine & Spirits
"Where America buys champagne" is the motto at what may look like a run-of-the-mill corner store to the untrained eye. In fact, this is your go-to merchant if you're anywhere near Pac Heights and looking for wine of any variety. And as it's been family owned and operated since 1935, you can say you're drinking a bit of history at this point. —Caleb Pershan
2200 Fillmore Street between Sacramento and Clay Streets 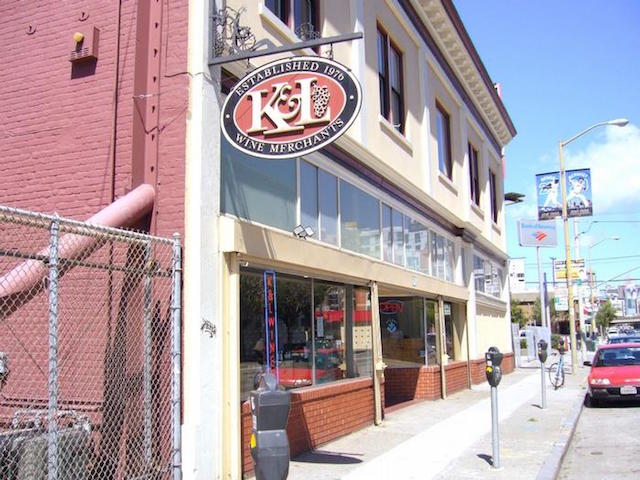 K&L Wine Merchants
Adorably named for their respective wives Kay and Linda, Todd Zucker and Clyde Beffa Jr. founded their wine mini-empire in Millbrae back in 1976. Currently they've got locations here in SF and in Redwood City and Hollywood. Selection is extensive and prices reflect that bottles are bought direct. And no matter your wine background, Ryan Woodhouse, who runs K&L's Personal Sommelier Program Manager, has a thing or two to teach you.—Caleb Pershan
638 4th Street between Bluxome and Brannan Streets 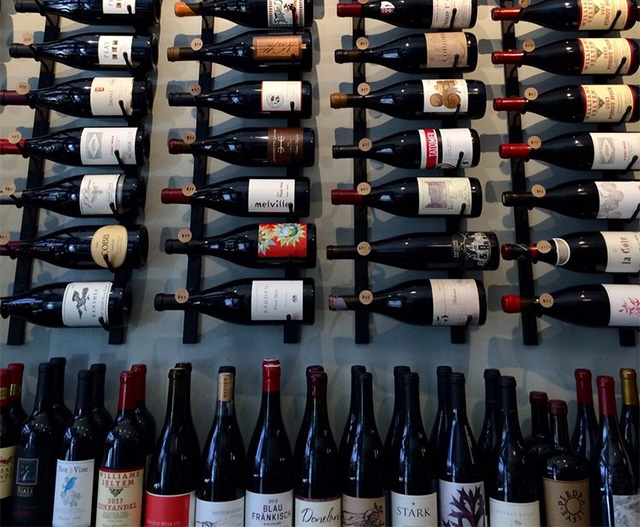 Little Vine
Just to clarify for people who live in the Mission or NoPa and have trouble getting to North Beach (it is, yes, kind of hard to get to), Little Vine is to Washington Square Park what Bi-Rite is to Dolores Park, only without the lines. It's an adorable little shop modeled on European neighborhood markets with a cheese counter, great sandwiches, and tons of good wine to choose from, with both Europe and California well represented. People in the neighborhood die for this place, and they're lucky to have it.  Jay Barmann
1541 Grant Avenue at Naples 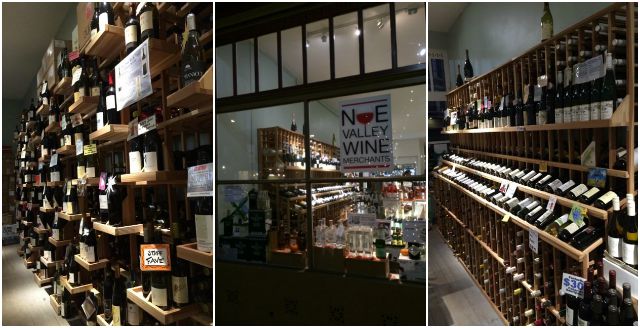 Noe Valley Wine Merchants
Once known as Urban Cellar, this space was reborn as Noe Valley Wine Merchants in 2012 after a comprehensive renovation by owner and long-time wine business veteran James Mead. When you see that the 1,060-square-foot space has a tasting room and nearly 500 wines, you might be intimidated, but don't be: Mead says they just want to be your "local bottle shop," and staffers are happy to recommend solid wines for dinner, special occasions, or (in my case) a respectable beverage to bring to a party when you're on a budget. Perhaps best of all, if you order more than $75 of wine, they'll deliver...for free. -- Eve Batey
3821 24th Street between Church and Sanchez 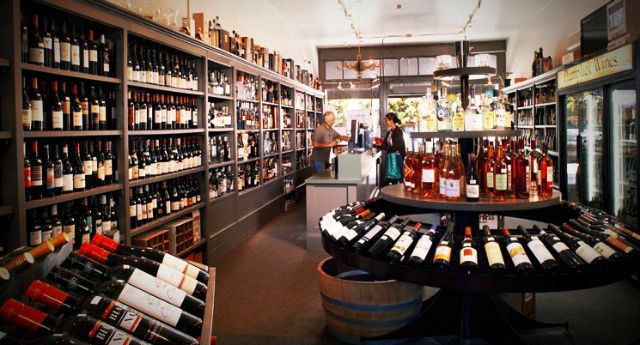 Plumpjack Wine & Spirits
When SFist launched in 2004 we made much hay of SF's 43rd mayor, Gavin Newsom, the founder of PlumpJack Wine & Spirits. Eleven years later, Gavin's running for Governor and I'm still at SFist, but I never have to go to Sacramento and am not wearing hair gel so jury's out on who won that one. Anyway, Gavin opened the Marina outpost of PlumpJack Wine & Spirits in 1992, with backing from family friend and local rich person Gordon Getty. The business grew into one that encompassed wineries, cafes, clothing, and far more, but the OG Fillmore wine store (and another in Noe Valley that opened in 2001) are still going strong. Now, don't expect Gavin (who went into rehab for alcohol abuse in 2007) to wait on you when you hit either location — though Newsom's mission statement of "demystifying the wine buying experience and removing the intimidation factor" remains on the site, he sold off all of his shares in the SF business when he was elected mayor. But his ethos still stands, as both have a solid selection of highbrow and accessible wines, as well as a helpful, attentive, non-snooty staff. -- Eve Batey
3201 Fillmore Street (at Greenwich) and 4011 24th Street (at Noe) 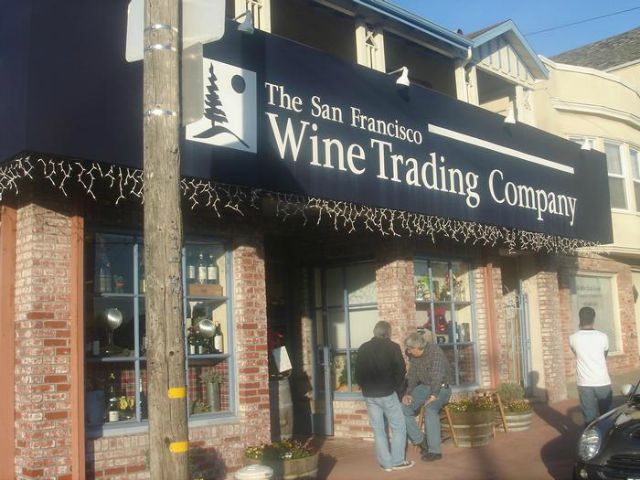 The San Francisco Wine Trading Company
The corner of Taraval and Funston has been an SF booze standby for ages, originally as a 70s-era store called "Mr Liquor." By the beginning of the last tech boom, owner Gary Marcaletti had rebranded the place as The San Francisco Wine Trading Company, and turned what was once a decent corner booze stop into a gorgeous spot stocked full of offerings from artisan, boutique, and family wineries. One reason for their remarkable selection: As opposed to many wine shops that have a single buyer, SFWTC sources their stock "by consensus," because "we believe a democratic process assures the best products for our customers and allows us to accommodate all budgets and tastes." Check out their tastings, every Saturday and Sunday from 2-5, and you'll be sold on their claim that "we only want to sell you wines that we would drink ourselves." -- Eve Batey
250 Taraval Street (at Funston) 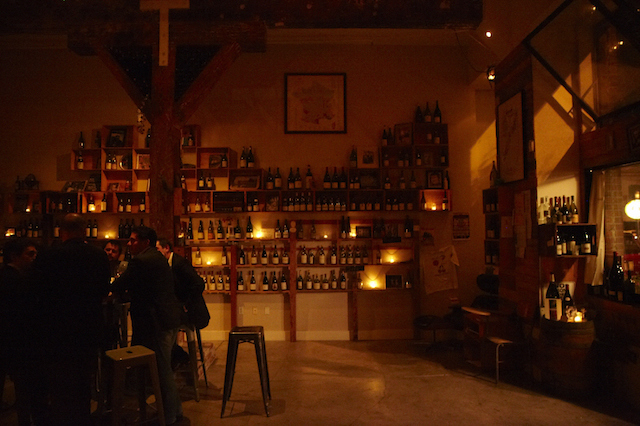 Terroir
Organic, biodynamic, minimal intervention wine — call this collection of styles and philosophies what you will, this Folsom Street shop's got them, and they're classifying the bunch as simply "natural" wine. The product of purveyors Dagan Ministero, Guilhaume Gerard, and Luc Ertoran, this airy two-level Folsom Street warehouse space has done steady since business since its 2008 vintage. Shop by day, by night it's a romantic wine date den. But if you're treating, keep in mind that Terroir's natural emphasis can lead them to eschew Californian winemakers for international ones, many of very, ahem, high-end. —Caleb Pershan
1116 Folsom Street between 7th and Langton Streets 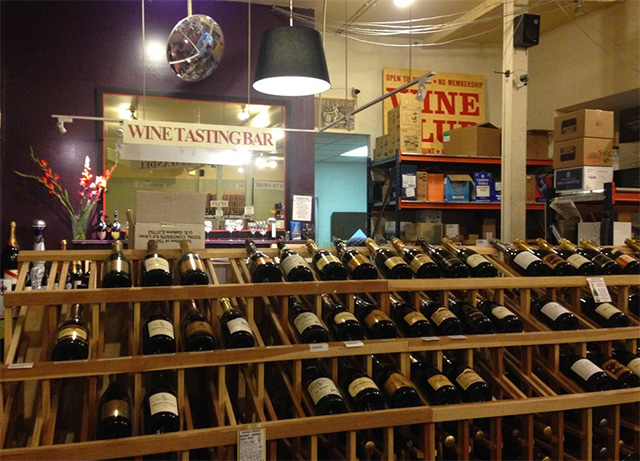 The Wine Club
This no-frills, value-oriented wine store in an industrial space in SoMa boasts something that none of these other spots have, which definitely makes it a fun place to shop: a self-serve tasting bar. For the ballers, this place has plenty of nice European stuff you can cart home by the case. But for the rest of us, and for true winos needing to stock up, there are a ton of options in the $10-$15 range, and plenty of closeout bottles for even less than that. Think of it as the poor man's K&L, but no one will ever know the difference, and you're not going to leave here disappointed.  Jay Barmann
953 Harrison Street between 5th and 6th

Cask (17 Third Street, mostly a high-end booze store, but they have a tight if small collection of wine if you're in a pinch)

DIG (1005 Minnesota Street at 22nd, a briefer selection than some with a focus on French and Italian only, but owner Wayne Garcia is incredibly passionate and knowledgable)

Swirl (572 Castro, can get pricey, but they do delve more into Europe than nearby Castro Village Wine Co.)

In order to make way for federal assistance for home repairs, temporary housing, and other programs to help people affected by the Valley Fire, President Barack Obama declared yesterday that the circumstances in

A crumbling, tiny shack that was recently listed for $350,000 in the Outer Mission/Oceanview  and subsequently made the viral rounds because, yes, this is what property is worth here despite the

—
The 11 Best Wine Stores In San Francisco
Share this