A nonprofit sexy social club evicted from their Mission District space two years ago is doing the quintessential San Francisco thing — moving to Oakland. They've successfully rounded up a team of investors to purchase the former TJ’s Gingerbread House soul food restaurant, a quirky six-unit complex in West Oakland that badly needed to be bought up and have something cool done to it. They're financing the deal with a membership drive, and SFist spoke with their leadership and scored some exclusive ‘sneak peek’ pictures of the new venue. 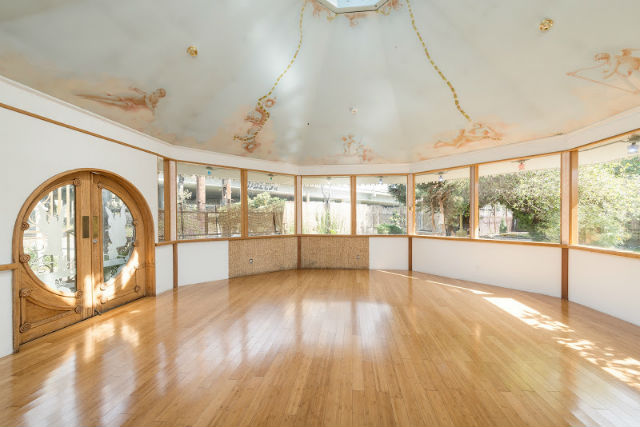 “The new location is so magical,” a Mission Control co-founder told SFist. “It's beyond anything I could have ever imagined. It has weird, quirky architecture and so much charm. The layout of the space is much better than our previous home, without all the bottlenecks and the awkward spaces. It's going to be a much better venue than before.”

The former Gingerbread House is an eccentrically decorated, multi-building complex that was famous in the last couple decades for the Louisiana cooking of the late T.J. Robinson, who passed away in 2011  not to mention the eccentricities of her daughter, Miss Noelle, who was a longtime server there. You've probably sat right on top of when your eastbound BART train inevitably pauses before heading down the tunnel of the 12th Street Oakland City Center Station. The kids are now busily refurnishing the place with after a long two-year odyssey of nomadically renting other people’s underground venues for events.

“It's been tough on a small number of volunteers who have really carried the burden of the extra work and complexity with using temporary spaces,” she said. “I'm eternally grateful to those who stuck it out through this time. But ultimately we learned that we can survive even through the most difficult times, and that is a heartwarming realization.”

“We have also become an official 501c(7) private social club,” she said. “After being in operation for nearly 15 years we are now too legit to quit! Our allies and members, are the lifeblood and their support has made it all possible.”

Renovations are underway at the former Gingerbread House, with the first events scheduled for mid-October.

Indie film and festival darling East Side Sushi, written and directed by SF State film program grad Anthony Lucero, is a story about Juana (Diana Elizabeth Torres), who gives up running her dad's

Uber's C.E.-bro Travis Kalanick has been on what reads to many as an apology tour, appearing on The Late Show With Stephen Colbert, posing for a piece of corporate portraiture in