Remember this little of corner of hell from a few weeks back? Well I'll do you one better: This sorry piece of housing for the desperate is upstairs from a Thai massage parlor on Geary Boulevard, in the Inner Richmond, and as the ad tells us it can be yours for a mere $550 per body person. That room, you see, sleeps six, and they're seeking a maximum return, like a lot of greedy property owners these days.

Didn't think this could get worse? Well, that earlier Apartment Sadness groan-inducer that slept 13 because the landlord packed a ton of beds into its four bedrooms is fucking palatial compared to this gem, which looks to have been a studio apartment  for one person  that's been retrofitted to become a six-person apartment.

And it comes with a teeny kitchenette and a breakfast table. That seats two. 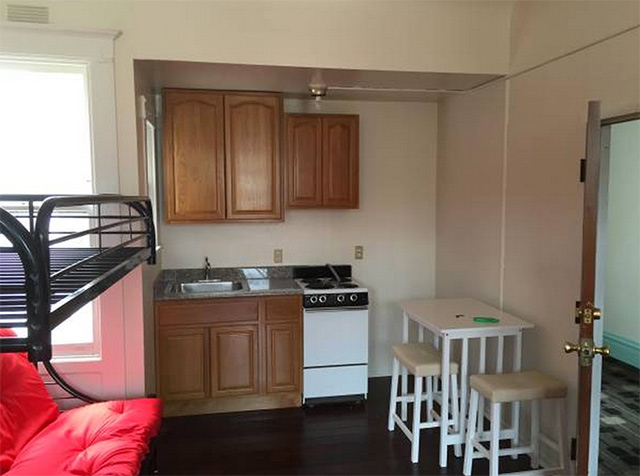 Who does this? And no, this probably isn't legal for this many tenants.

Maybe you have five coworker bros you'd like to live with and this will do you just fine. The only problem is where to put the Playstation and TV, because that's it. One room.

It's being marketed as student housing since it's pretty close to USF, and maybe some USF students who can't afford campus housing will go for it? But still. Six to a room. And the ad is a little dodgy about how many of these studios/rooms there are in this building because it looks like they they probably evicted everyone and threw bunk beds in all the units. There's a "Renovated kitchen in every room" and "shared bathrooms" but it does not mention how many bathrooms there are for how many units. Nor is there any mention of common spaces, so there likely are none.

CBS 5 went "undercover" inside one of those techie communes/hacker hostels this week, and while that living arrangement  a single Victorian with a bunch of bunkbeds that sleeps 30 people  is basically as sad as this one, it does come with a stocked fridge and well equipped common area. But for $1,800 a month I hope people know they could probably do a fair bit better somewhere and not live in a room like a goddamn cult member that looks like this.

Seriously, is NO ONE HAVING SEX IN THIS TOWN?? Because no one could bring home a date in ANY of these places and hope to score unless it's right on the living room couch. If there is a living room, and if you're both really drunk and shameless.

It's places like this that mean some longtime tenants are getting evicted, like Tarin Towers who also spoke with CBS 5, whose building got turned into a hacker hostel for "mostly men" in their twenties. 50 or 60 of them, she says. Because why should a landlord rent out apartments for $4,000 apiece when he could be getting $1,800 a head from 30 of 50 people?

This shouldn't be legal, and it shouldn't be happening, because no one should live like this. And no one probably does for long, since in this gold rush these kids are arriving in town, wanting to bunk down in the Mission in a hurry, and they move on in two months once the paychecks roll in  and as a landlord you'd need a damn management company to sort through all the turnover of tenants, check credit scores, and collect all that rent.

And why is it legal? Well, according to the Planning Department, because these are 30-day-minimum-stay situations as advertised on Airbnb, they don't fall under the short-term rental regulations, and to accommodate four adults a room only has to be a minimum of 170 square feet per current housing code.

And why is it happening in all these places? Because there's demand, and a shit ton of Millennials with low standards, middling income, and clearly a desperate need to live in the middle of the city, no matter how cramped the conditions. And if they keep paying, landlords will keep creating these hostels, at least until the bubble bursts and all the transient people leave.

It kind of makes a person wish for a great big earthquake and fire, and a clean slate. But I'm not saying I'm that person.

Last weekend the Chronicle told the encouraging tale of tiny, 32-year-old Video Wave, which was saved by loyal Noe Valley neighbors by sharing space with a candy store. But a move last year