If this can be said of anyone, Jeff Goldblum's voice is jazz. His impromptu cadences, his vocal dynamics: They're unexpected delights no written interview — apologies! — could do justice.

Fortunately, Goldblum hopes to do real musical justice to actual jazz next weekend with his Mildred Snitzer Orchestra in San Francisco. For those who didn't know, yes, Jeff plays keys, and just as theatrically as you'd expect.

With his orchestra, so named for a friend of the Goldblums in their native Pittsburgh, the multi-talented 62-year-old performs weekly in Los Angeles. SFist spoke to Goldblum on the occasion of his performances at Feinstein's at the Nikko: Two sold-out shows next Friday and Saturday, the 28th and 29th. Due to popular demand, there's now a third Saturday late show with tickets available.

SFist: Jeff Goldblum. We're excited to have you in town! Have you played the Bay Area before?

Goldblum: I've never played music up [in the Bay Area] and this will be a total first and a thrill for me. I love it up there and had a couple of big memorable life events up there — what did I do? Invasion of the Body Snatchers? And we filmed the pilot episode of Tenspeed and Brown Shoe up there in 1980.

SFist: Cool! Do you have any pals in San Francisco or in the area? I was wondering, for example, if you were friends with Carl Lumbly, who's onstage a lot here — I ask because of the Buckaroo Bonzai connection.

Goldblum: Oh does he? I haven't seen Carl, actually, but I'd love to, I remember him very fondly. We had a great time on [Buckaroo Bonzai] and that's one of the connected dots that led me back here to perform! Because — Peter Weller, did I meet him on that? I think I did! He's a horn player, and he was into this 'playing together' stuff. He would come over to my house, and we liked each other and we would play together, and his friend came over — a guitarist, a wonderful musician with whom he was studying — and we experimented together.

[Weller] went to do this Woody Allen movie and he got to talking with Woody Allen, and [Allen] said, well, 'you should do and get yourself out play a gig, you get better that way.'

Peter said 'I know a guy who has a restaurant' and we started out with [a performance] at a brunch. We got guys to play with us, and that's been changing and evolving, and Peter has been out and about and not playing with my group — I haven't run into him recently. But I've maintained this thing, performing, more and more regularly, including between my jobs.

SFist: Speaking of Woody Allen, another fine jazz musician who just played in San Francisco, there's a line I wanted to ask about from Annie Hall. On the phone you say 'I've lost my mantra' or 'I forgot my mantra'. Well, I wanted to ask, have you remembered it? Have you found it?

Goldblum: 'I forgot my mantra!' Full circle, when last we played — and the only time we played — at the Carlyle Hotel, Woody Allen was playing there. The night before we started our stretch — I'd seen him once before, and really hadn't run into him since I did that line in 1975-ish — and so I thought, well I'd like to see the room, to see him again, and me and my bass player got pals-y with the very friendly band leader that he's got and the banjo player. We started to talk before Woody came in, and I said oh my gosh, maybe I'll sit in! Half way through, Woody said look who's here, and so we sat in on a couple of songs. It was delicious.

You know, I'm still appetized for life itself in many ways and I find acting not to be pretentious, and music, and I'm married now and I just had a baby six weeks ago. And I've been working on this movie, this Independence Day 2. I play a character, David Levenson, and there's some nice stuff to do in it: The whole thing was chock full of interesting and delightful people in the cast. And even the subject matter, being visited by aliens! Well, you know Neil deGrasse Tyson? Last night I sat down and watched Cosmos, and I'm totally into it, I think it's very enlightening!

I keep doing what I kind of imagine is my lot in life, which is learning.

SFist: Ah, okay, so If you could learn from, on the jazz front, some jazz greats, who would those be?

Goldblum: Well you know, I'm still kind of filling in my education — I didn't go to college to study jazz — but what I gather they do in these courses I'm still filling in through my listening education.

I'm listening to Oscar Peterson, Art Tatum, Erroll Garner — from Pittsburgh, where I'm from, because my parents back in the '60s would bring back his records. On my phone these days I'm listening to Bill Evans, Theolonious Monk... just catching up with all of them.

Oh, and Tony Bennett! Do you like Amy Winehouse?

Goldblum: Well, when she was around she struck me terrifically, and seeing this documentary, Amy, which I was very eager to see, really struck me, especially Tony Bennett. That scene, which feels very voyeuristic, this scene of her in her very sad stages of breakdown and difficulty, where she's almost walking out, and saying 'I can't do this', and Tony Bennett is so thoughtful. I've adored him for so long, and in fact met him once. He says to her, 'You're gonna be fine, just do what I do, and keep trying to make it better.' And he's so sweet, and they come up with this lovely recording, and I found the most touching part of the documentary to be when Tony Bennett says, 'Life, if you stay around long enough, teaches you how to live it.' I just thought that was boiled down, rich broth.

SFist: Speaking of Tony Bennett, it just occurred to me, have you thought about doing 'I Left My Heart In San Francisco?' when you're here?

SFist: I might do anything! What I usually like to do, believe it or not, is I leave it up to John Mastro, who has been this band manager, and he's a musician... we've sort of cooked up this approach whereby what he does is sort of make this a surprise event for me. It's what I seem to have an appetite for! I have a bunch of songs I play every day that we might get to, and I bring my book, but he doesn't tell me what we're going to play.

I like to improvise, I like to do cold readings. But, I'm nothing if not conscientious: I practice, and when I'm on set, which I've been doing in Albuquerque for Independence Day... I'm a big proponent of preparation, coming up with an interesting way to play something whether its musically or theatrically.

So, Tony Bennett. Maybe we'll play it, but I want to be surprised. 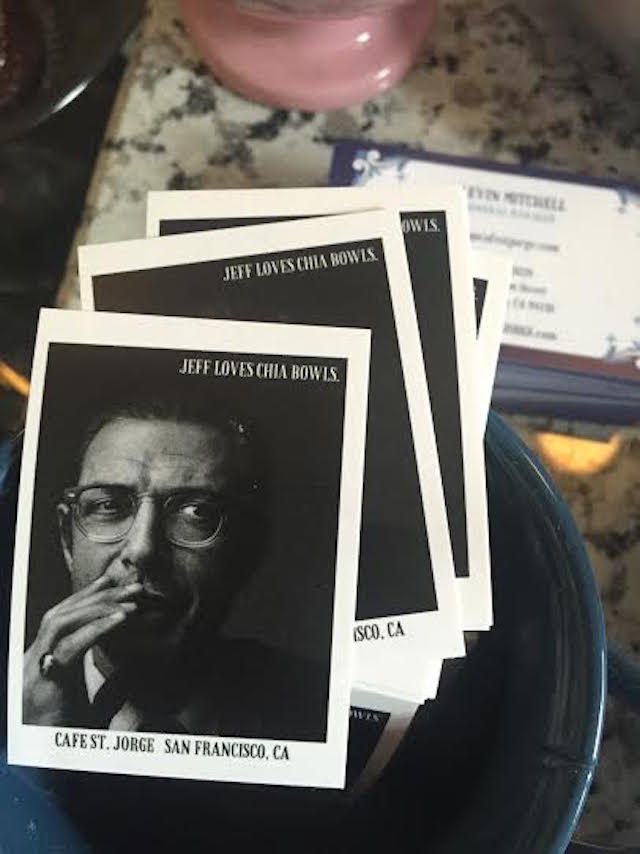 SFist: Could you talk about the group you'll be playing with a bit?

Goldblum: The local bass player that we've never played with but who comes highly recommended is Dan Feiszli, and of course Lincoln Adler, who will sit in as our saxophonist, and Annie Ellicott, who has sung with us here and whistled sophisticated jazz, in my humble opinion, she'll be with us for a couple songs. And our regular members Kenny Elliott on drums, James King, who's one of the stars of Fitz and the Tantrums, and on guitar John Storie.

They're the meat and the brisket and the potatoes, I'm the I don't know what, I'm the horseradish.

Goldblum: I haven't seen it, but congratulations to them! Because, you see, I've been in Albuquerque shooting, which overlapped with their premiere and this run of the movie. Did you like it?

SFist: Hmm. Well, let me ask you something else, and this is totally random, but I was pointed to a production of the most wonderful tale — The Legend of Sleepy Hollow — which you did a long time ago, playing Ichabod Crane.

Goldblum: Yes, Sun Classics, we filmed in Utah at a ski resort in the middle of winter and I remember it was a modest production compared to, say, the Tim Burton version. But I recall being very moved, when we were outside in the snow. I was actually recalling this on set in Albuquerque. I was saying to myself, on this path, because it reminded me of Robert Frost, "The woods are lovely dark and deep / But I have promises to Keep / and miles to go before I sleep."

I remember thinking about it then and kind of weeping... It's a struggle. [The narrator] gets caught up in the spookiness and the bigness of nature. I've read analysis, and I think it's not a bad thing, it's not death, maybe that's part of that guy's dilemma. But maybe instead of death, the woods and all that is something so profoundly mysteriously good and cosmic and unnamable. It's very actable: I can see myself, or somebody else acting that moment.

For the second week in a row we have a spiffed-up SRO that some owners are trying to fill with a better class of tenant than they've likely previously had, given the location

Was it an impromptu crime or a targeted robbery? That's just one of the questions the San Francisco Police Department is mulling after a vehicle collision in SoMa turned into a midday mugging.