A person could spend a couple months eating at a different taco establishment every day and still not exhaust San Francisco's supply. Naturally they're not all good, but many are, and we're likely going to leave off one of your favorites in the list below. But we here at SFist are some taco connoisseurs, much like we are burrito connoisseurs, and we know good al pastor from bad. Taking into account salsa selection, meat quality, and flavor (but not ambience!) we bring you our 16 favorite taco spots in the city proper  but the fact of the matter is the best tacos in the Bay Area come from a few trucks on International Boulevard in Oakland, but not everyone's that adventurous.

Taqueria Cancún
When the burrito at Cancún feels like too big a feast, it's taco time. This friendly but all-business operation lays it on thick, with super tacos loaded up on sour cream, salsa, and fresh avocado. People rave about the expertly braised lengua, but I'm boring and almost always get al pastor. —Caleb Pershan
3211 Mission Street between Valencia Street and Fair Avenue, 1003 Market Street between Golden Gate Avenue and Taylor Street, 2288 Mission Street between 18th and 19th Streets 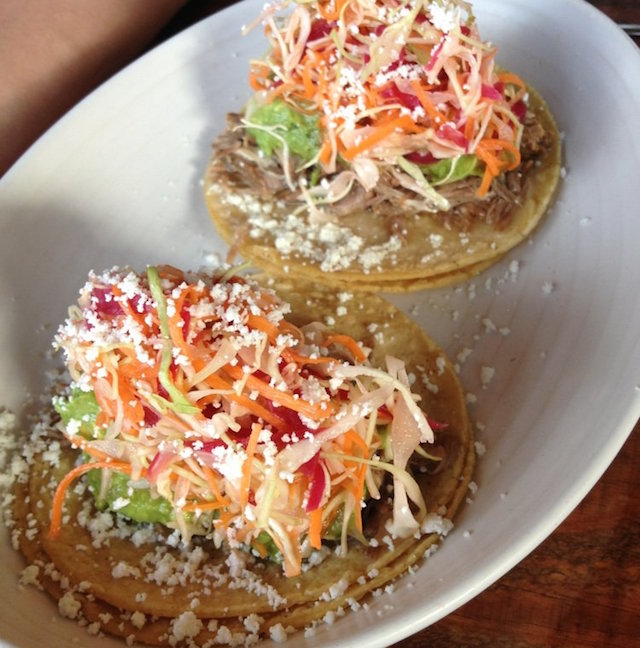 Padrecito
At this Cole Valley sibling (husband?) restaurant to Mamacita, the ideas for tacos involve Arctic char, goat, duck, and — perhaps inevitably — pork belly. And as Padrecito will be sure to tell you, the restaurant's chefs source their meat and poultry from the likes of Mary’s and Marin Sun Farms. By the same token, all seafood here — seriously, try the fish tacos, guys — is approved by the Monterey Bay Aquarium watch list. Heaped with colorful slaw and dusted with queso, these tacos are as beautiful as they are tasty. Caleb Pershan
901 Cole Street between Parnassus Avenue and Carl Street 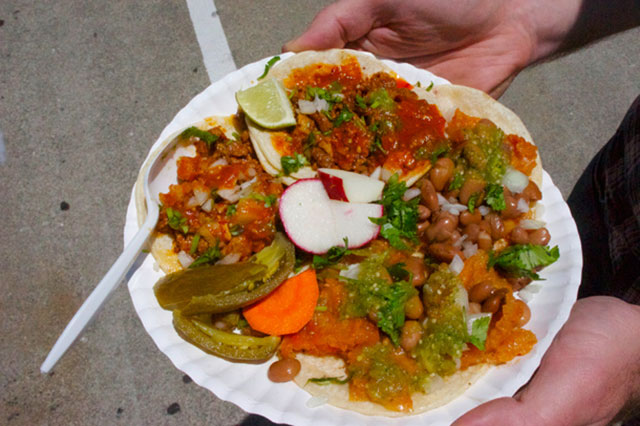 El Gallo Giro
Arguably  and people are definitely going to fight over this statement  this truck serves the best al pastor in town. It is perfectly spiced, complex, and totally crave-worthy. But people also come back for El Gallo Giro's tomato-braised chicharrones tacos (I haven't seen a chicharrones taco like this anywhere else), and their delicious lengua too. As taco trucks go, this may be the best thing you're going to find west of International Boulevard in Oakland.  Jay Barmann
Truck parked at 23rd and Treat 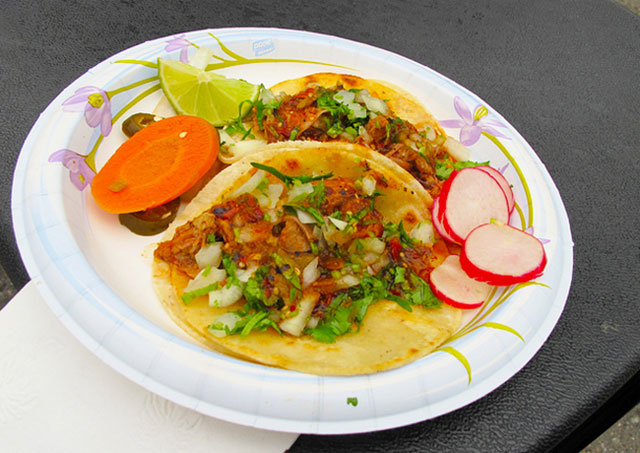 El Norteno
Definitely the best tacos you'll find in SoMa come from this truck, always found across from the courthouse. I'm a big fan of their carnitas and goat, but their al pastor or carne asada will do in a pinch, and they serve some of the best, freshest salsa verde you'll find anywhere.  Jay Barmann
Truck on Bryant between 6th and 7th 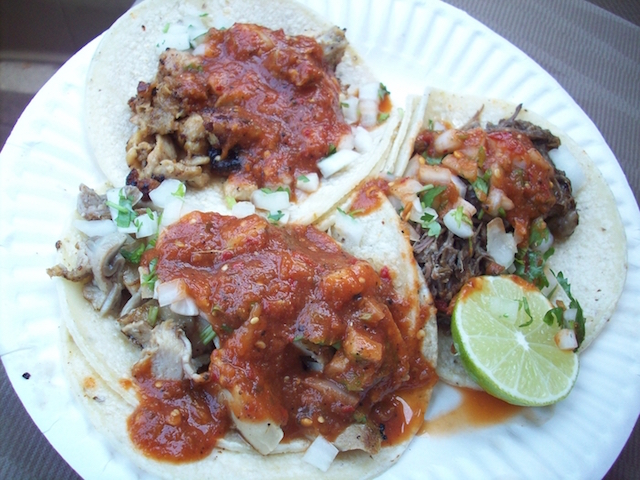 El Tonayense
El Tonayense was established in 1993 by a family from the area of Tonaya, Jalisco Mexico (hence the name). A real taco truck operation in that it posts up in the middle of nowhere, a member of the Tonayense fleet can reliably be found by the Mission Best Buy. Once initiated into El Tonayense taco paradise, you'll start to see and stop at these trucks all over town. Also, could these guys be the only thing keeping Best Buy in business? Just asking. —Caleb Pershan
Truck at Harrison and 14th Street 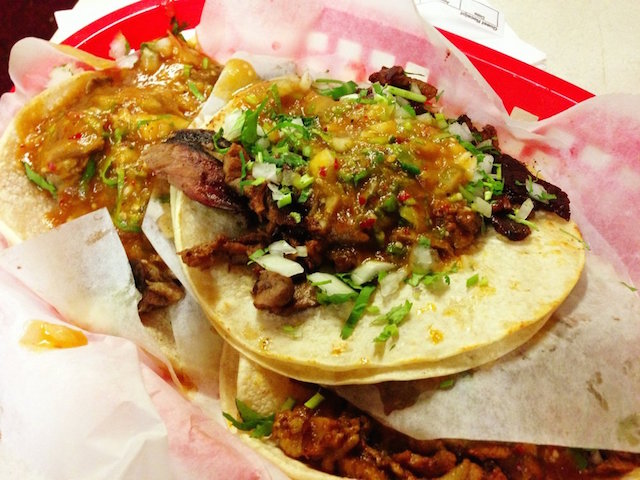 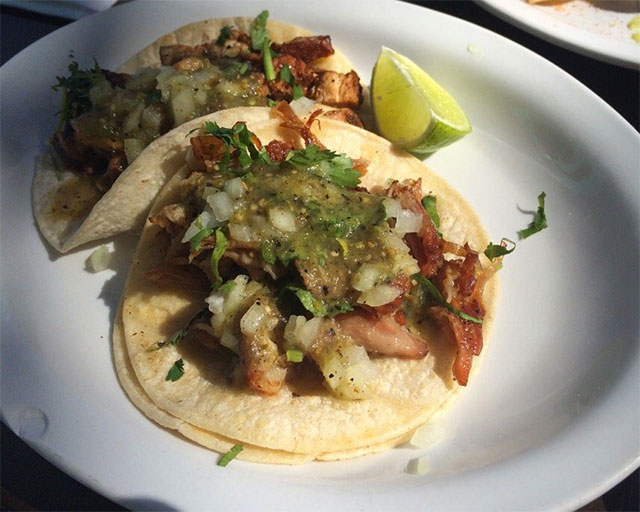 A chicken and a carnitas street taco. Photo: Lori T./Yelp

Tacos Club
You've got two options at this sort of upscale taqueria in the Castro: the $2.65 street tacos, and the $5 "grande" tacos. The latter are over-stuffed, and two definitely make a meal, while the former are pretty tasty as well, and well suited for mid-drinking snacking. The pastor is just meh, but the fish taco is solid and carnitas is on point.  Jay Barmann
2312 Market Street near Noe 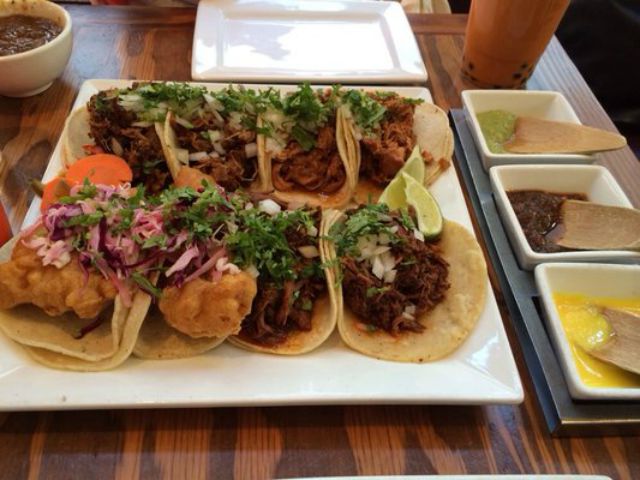 Tacolicious
Though it was controversial when it first landed in the Mission, the neighborhood has come to embrace the gringo-fied fare at Tacolicious. And you can't knock that short-rib taco until you've tried it. Also delicious are the fish tacos, and the Mexico City-style nopales-and-griddle-fried-cheese tacos they serve in the next-door tequila bar, Mosto. The minty salsa is pretty addictive too. The only real downside is there's pretty much always a wait. Luckily there's the tequila bar to wait in.  Jay Barmann
741 Valencia, 2031 Chestnut, and 1548 Stockton

Loló
Have some fun and take a few liberties with the tacos at this "Jaliscan-Californian" restaurant on Valencia Street. Fun, quirky, and mostly without pretense, Loló is a great dinner spot for fresh, seasonal tacos. Those rotate, but you can usually count on the Taco Tropical: Panko and spice-dusted shrimp topped with a topical relish and spicy aioli. Another hit is the tuna tacon, with seared albacore tuna, shellfish aioli, avocado, and roasted tomatillo sauce on the side. Don't forget about Loló Cevicheria, just around the corner with lots of the same menu offerings and a similar atmosphere in a smaller space. —Caleb Pershan
974 Valencia Street between 21st and Liberty Streets 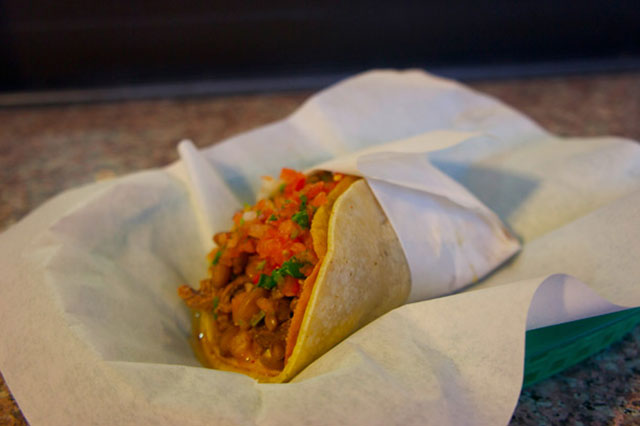 La Taqueria
The quintessential Mission taco can be had at this place, and unlike some of its truck-based counterparts, one taco here is a meal in itself. They come stuffed with pinto beans, cheese, and plenty of meat, wrapped cone-style in a hefty tortilla. And even though the meat is salty and nothing to write home about  we'd stick to the basics of carne or pollo asada here  the whole combination is pretty addictive. And just what the doctor ordered after a half dozen beers at Clooney's.  Jay Barmann
2889 Mission (at 24 Street) 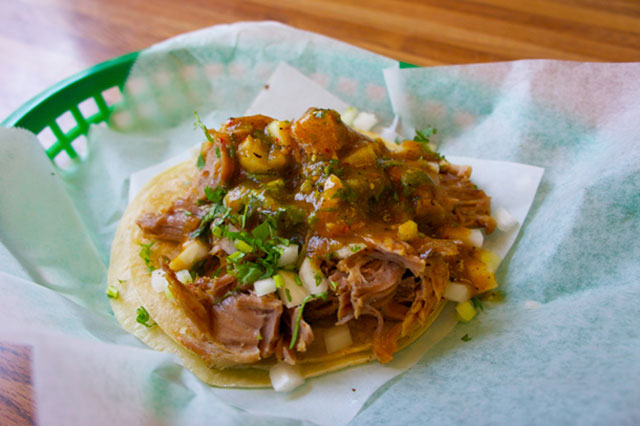 Taqueria San Francisco
If you're a fan of carnitas, look no further than this place. It's tender, chunky, well seasoned, totally sublime, and at $2 I'm ready to call this place the poor man's Nopalito, at least where the carnitas is concerned (and it might even be better than Nopalito depending on the day).  Jay Barmann
2794 24th Street (at York) 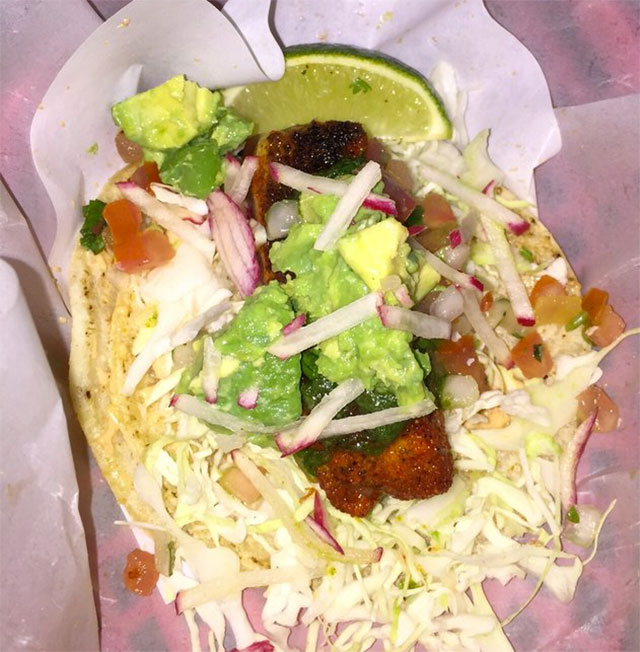 Garaje
El Garaje debuted in 2013 to almost instant popularity with SoMa tech folk  and being so close to AT&T Park hasn't hurt either. They do a fancy version of a Taco Bell Double Decker dubbed the "Como Se Llama?", which is a crispy corn taco shell wrapped with a cheesy flour tortilla, and filled with your choice of meat, pico de gallo, guacamole, and refried beans. They also do salmon and ahi tuna tacos, along with some solid carnitas and carne asada.  Jay Barmann/Brock Keeling
475 Third Street (at Stillman) 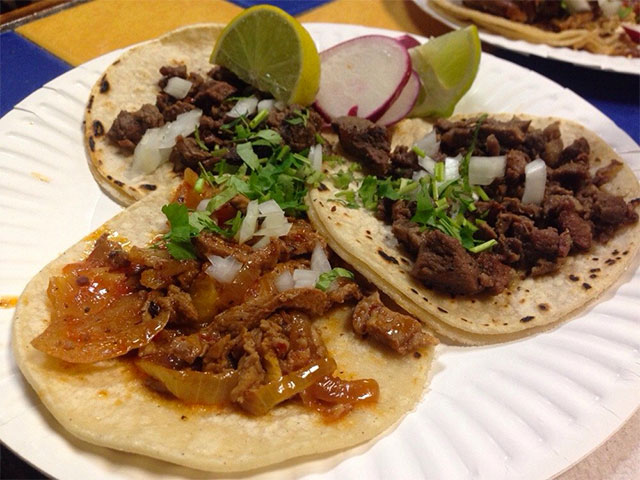 Taqueria Vallarta
You're going to walk in this place, if it's your first time, and you're probably going to want to walk out. It's badly lit, kind of dingy (they had a totally disgusting pigeon issue in the rafters a couple years back), and there's a weird stand/bar up front where all they serve are tacos, with a do-it-yourself salsa bar in front. But dammit if the meat selection here isn't top-notch, subtly seasoned, and awesome. This is where you want to get adventurous and try some trippa (tripe), or lengua (tongue, which is excellent and tender), and their pastor and beef are solid if you're playing it safe. Also, it's damn cheap.  Jay Barmann
3033 24th Street (skip the 16th and Mission location) 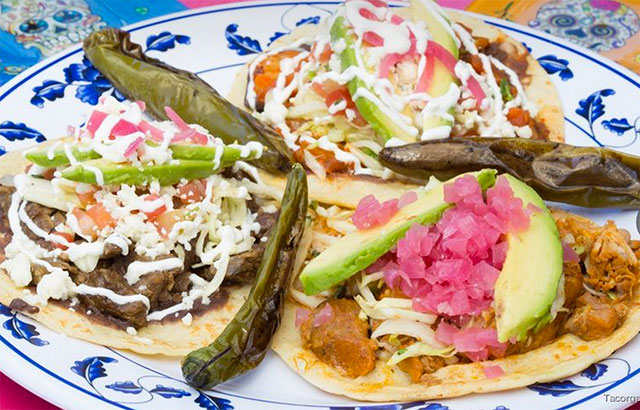 Tacorgasmico
The newest spot on this list, which recently opened in the Castro in the former Blue spot, is the unfortunately named but absolutely yummy Tacorgasmico. Possibly the best thing about the place is that they serve the marinated, slow-roasted pork from the Yucatán known as cochinita pibil which is not commonly found in San Francisco (moreso in L.A.). Get some of that in a gordita or taco and you will not be disappointed. Also great: the shrimp tacos, the other pork dish called poc chuc, and the pollo pibil. What's in a name, anyway?  Jay Barmann
2337 Market Street near Noe 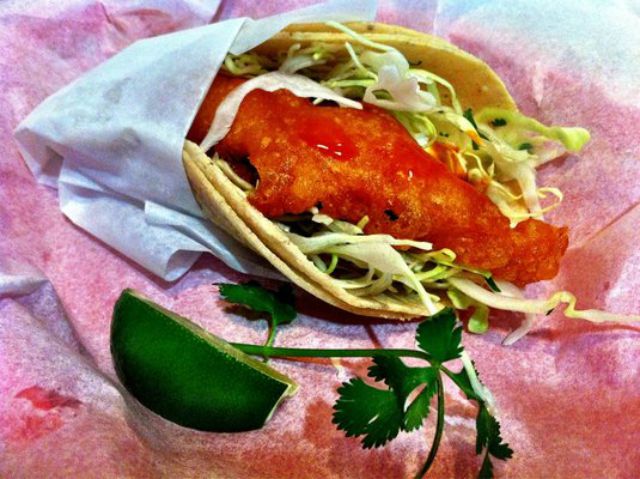 Nick’s Crispy Tacos/Tacko/Taco Shop at Underdogs
While Nick Fasanella (he of the taco that is crispy) is no longer associated with Polk Street's Nick's Crispy Tacos, the tacos at Nick's and Fasanella-driven Tacko and Underdogs remain more or less the same, right down to the fixin's that get added when you ask for them "Nick's Way." More surf "Mexican" than Mexican Mexican, a hot baja style fish taco Nick's way is one of our favorite fish tacos in the city, and that's saying something. -- Eve Batey
1500 Broadway Street at Polk Street, 3115 Fillmore Street at Filbert Street, and 1824 Irving Street between 19th and 20th Avenues 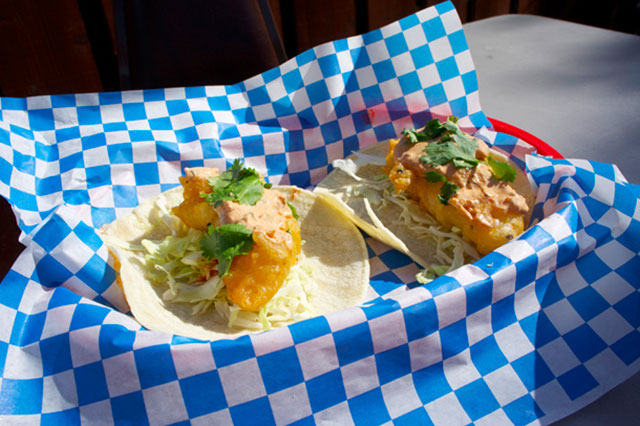 The Codmother
Though it might seem like an odd place to discover an excellent fish taco, this fish-and-chips stand near Fisherman's Wharf most certainly makes one. And given that they're batter-frying fish all day, that makes sense. The battered fish filets are always perfectly fried and crispy, and they make for pretty monstrous tacos  be warned, you may only need one. They come topped with some tasty "baja" sauce, and added bonus: there are great french fries, too.  Jay Barmann
2824 Jones Street at Jefferson
Carnitas tacos at Padrecito Rosanne L. via Yelp

A photo posted by @dominiquecrenn on Jul 29, 2015 at 2:24pm PDT The esteemed Dominique Crenn, chef and owner of Michelin Two-Star Atelier Crenn, has announced the opening date of sequel establishment

Earlier today, KRON 4 reported on new details in the case of the murder of eight-year-old Madyson "Maddy" Middleton in Santa Cruz on Sunday  namely that she had been raped and strangled to