Earlier today, KRON 4 reported on new details in the case of the murder of eight-year-old Madyson "Maddy" Middleton in Santa Cruz on Sunday  namely that she had been raped and strangled to death before her body was discovered in a recycling bin at the housing complex where she lived with her mother. This afternoon Santa Cruz DA Jeffrey Rosell announced at a press conference that the sole suspect in the case, 15-year-old Adrian Jerry Gonzalez, will be charged as an adult with her murder, with the special circumstances of sexual assault, kidnapping and lying in wait, and he could face life in prison without parole.

As ABC 7 reports, Gonzalez and Middleton were "acquaintances," and it appears that Gonzalez lured her to his family's apartment on Sunday evening where he was alone with her when she was killed. She appears to have trusted him enough to follow him to the apartment.

The murder took place at the Tannery Arts Center, an affordable housing complex for artists where Middleton lived with her mother, Laura Jordan.

Police report that Gonzalez was lurking around the trash bins on the first floor of the complex while the search for Middleton was taking place, and he may have been standing nearby watching as they searched the bin where the body was discovered. He was taken in for questioning almost immediately, and arrested on Monday evening.

A small memorial that you can see below has taken shape just outside the complex.

Memorial outside apt for Maddy pic.twitter.com/xAKYjt4sSS

Update: Heavy.com swiped some photos of the suspect via his now deleted Instagram account, including these two below. 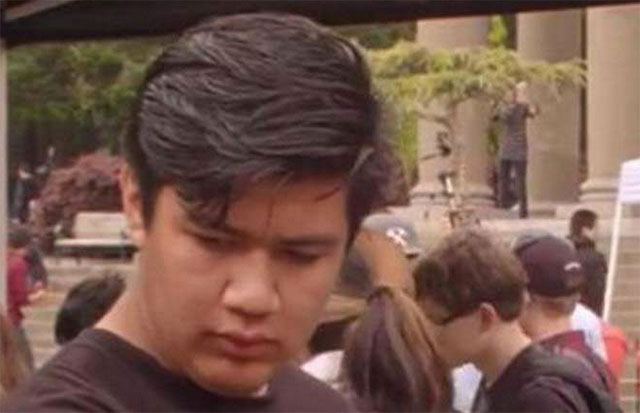 The teen described himself as an avid "yoyoer," and one of his handles was "Awkward Adrian."

KTVU's Janine de la Vega is reporting that Gonzalez was hanging around the complex yo-yoing asking if there were "any updates" as neighbors and police searched the area on Sunday and Monday.

And KRON 4 is now reporting that Middleton was duct-taped during the sexual assault, and she was both strangled and stabbed.

A person could spend a couple months eating at a different taco establishment every day and still not exhaust San Francisco's supply. Naturally they're not all good, but many are, and we're likely

“I know this seems a misleading to you," an Uber staffer tells Vice of the Uber cars you see on the app as you prepare to a hail a car, "but it is

—
15-Year-Old Suspect Named, Charged As An Adult In Rape And Murder Of Maddy Middleton
Share this