Over at the UC Botanical Garden in Berkeley, a rare Indonesian "corpse flower" specimen that's been blooming every three to four years began spreading its ghastly bloom on Saturday night, and was available to be seen by the public all day Sunday before it began to wilt. The garden stayed open late, in fact, until 7 p.m. last night, to accommodate all the visitors, as KTVU tells us.

As ABC 7 reports, at least 1000 people streamed to see, and smell, the plant after reading about it on social media on Sunday. And this is the first blossoming of the stinky thing since 2011.

The stench, which is said to be like that of rotting flesh, was probably greatest overnight Saturday as the flower first bloomed, but could still be smelled into Sunday, up close.

The plant is actually owned by a local collector of rare plants who grew it from a seed gotten in Sumatra in 1995. It took a full ten years to bloom for the first time, in 2005, and has done so again in 2009 and 2011.

The Titan Arum, or Amorphophallus titanum, nicknamed Trudy, is "not actually a single flower but an inflorescence (a stalk of many flowers)," as the Botanical Garden explains. "The flowers are a mixture of tiny male and female flowers held out of sight at the base of the central phallus-like structure (spadix) surrounded by a pleated skirt-like covering (spathe) that is bright green on the outside and deep maroon inside when opened. The female flowers mature before the male (pollen producing) flowers which avoids self-pollination." 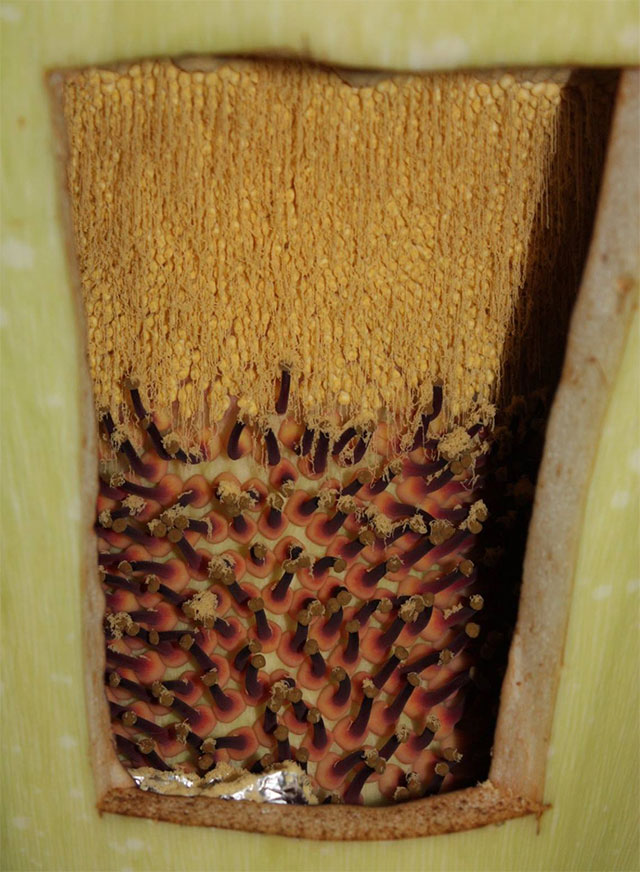 Further, the blossoming event is extremely brief and therefore coveted by plant enthusiasts. "The flower bud may take months to form but only remains open for a day or two before collapsing to restart the cycle. The characteristic ‘corpse’ odor is only produced for about a day before the collapse. If pollinated, the stalk grows into a large club-like head of orange-red seeds."

The rare bloom remains a worldwide source of fascination because of all these traits, and its enormous size. But, alas, your chance to see it in all its glory has already passed. (The garden is still accepting visitors between 9 a.m. and 5 p.m. if you want to see it in its wilting state.)

Famously, the Brooklyn Botanic Garden also has a specimen that blooms every few years, and they've got one in the Bronx too.


A cutaway shows the plant's actual flowers, from which pollen was harvested yesterday. Photo: Facebook

As the Oakland Tribune and the Chronicle report, 71-year-old stone-ground masa operation La Borinqueña Mex-icatessen is grinding to a halt at the end of this month. It's a sad goodbye to tamales “made

"I routinely go through moments where bus drivers resist the idea of letting me on the bus, or just pass me up, or act a little rude or horrible," the writer, blogger, poet,

—
Stinking 'Corpse Flower' Blooms For One Day In Berkeley, People Flock To Sniff Stench
Share this