A couple years back SFist did you the solid of listing the city's five worst Walgreens. Now, as a new report arrives via Hoodline about one downtown Safeway in particular (145 Jackson Street), it feels like it's time to discuss the fact that not all Safeways are created equal either. San Francisco is home to 15 Safeway stores, some of which have undergone recent remodels to look more like The Poor Man's Whole Foods, and at the newly spiffy Potrero Center Safeway, they even let you make your own peanut butter.

Then there are the forgotten Safeways, the places that even a remodel can't fix, where combinations of crime, poor stocking, general grime, and surly staffs make entering them an exercise in urban warfare. I am sorry, truly, if any of these are your neighborhood Safeway. It's a good thing that we live in a world with Trader Joe's, isn't it?

6. Ocean Beach (850 La Playa Street)
Right smack near the beach and the Great Highway is this old-school Safeway that has been entirely untouched by the remodeling gods. As nearby resident and SFist editor Eve Batey describes it, this store is "pit bull central" and "mega sketch" thanks to beach-dwelling homeless, and the general apathy of the staff. You should go here if you need wood for your Ocean Beach bonfire, or if you need to pee after beach drinking, but not really for any other reason. Also, as one Yelper recently noted, they've started playing country music in this Safeway, which is just odd. 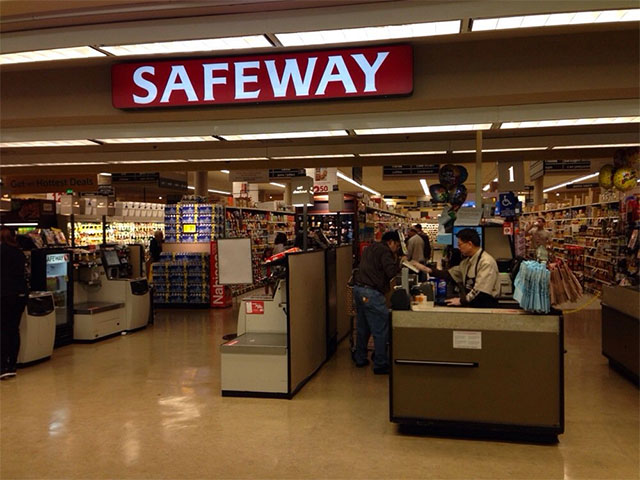 5. Fisherman's Wharf (350 Bay Street)
In part for its large homeless patronage, due to its proximity to the homeless encampments of Mason Street, this Safeway tends to be one of the unhappiest in town. You have tourists wandering around looking for toothpaste and some very disheveled, sometimes intoxicated individuals in sore need of showers hoping to shove some Pringles in their backpacks while no one is looking. Expect some expired deli meat and shoddy stocking in the produce section. The parking garage here is pretty sketchy too, and not recommended for single ladies at night. 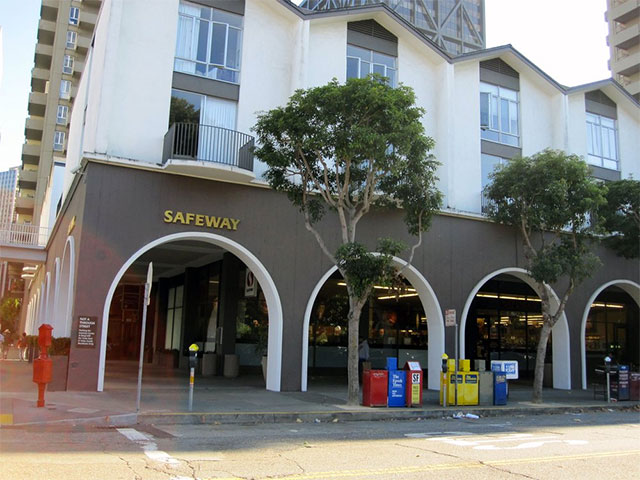 4. Gateway Apartments Safeway (145 Jackson Street)
This store primarily serves the population in the multi-tower Gateway complex, as well as daytime workers in the Financial District and another residential complex across the street, but there is also a park across the street, Sydney Walton Square, that is often a resting place for the homeless. On the weekends and at night the store feels more deserted, and it's one of the tiniest, if not the tiniest, Safeways in town. As Hoodline reports, there have been 15 police calls to this store in the last six months, including an incident last Sunday involving a disturbed woman who made a serious mess of the soup station. As a witness tells it, "People were super scared" as the woman picked up the entire metal terrine of clam chowder and threw it against a window. She then began "throwing soup all over the flowers in the floral department." That's of course just one incident, but the security staff here is reportedly pretty "hands-off" and useless, and most Yelpers complain about extremely long, extremely slow lines at checkout. 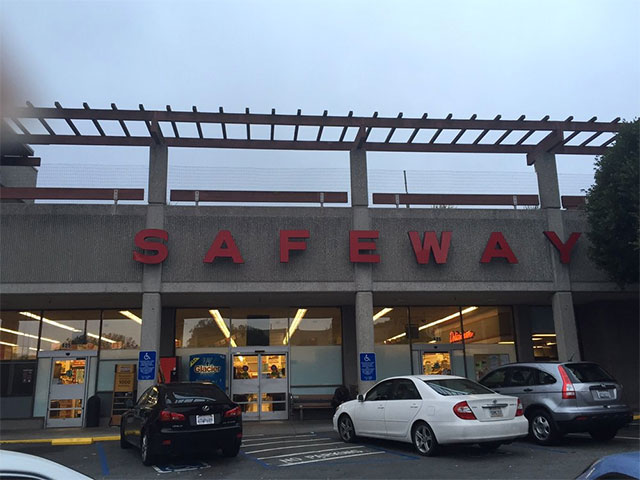 3. Sunnyside (625 Monterey Blvd)
First of all, as many people on Yelp will advise you, you should not drive to this Safeway and park in the upstairs lot unless you want your car broken into. As SFist commenter Chuckles also shares, "It's probably the smallest Safeway (too small to have a butcher), during peak hours they never have more than 2 cashiers working, I’ve seen the manager get personal in an argument with a customer at check out (the manager also looks like she hates life) [and] I'd look into getting a tetanus shot if I was ever faced with the dilemma of needing one of their carts." You can just take a look at the dated signage out front and know that this store is old and dusty, and one customer reported on Yelp, "I have seen expired package deli meat and things that are actually MOLDING that are on the shelves." Luckily, there's a Lucky's on Sloat, and a Whole Foods minutes away too. 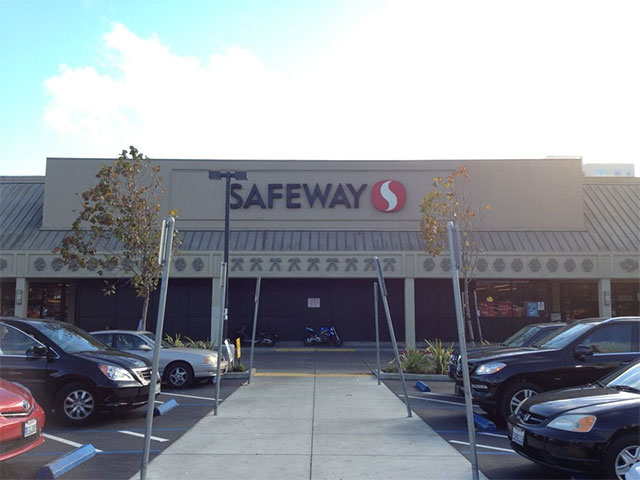 2. Fillmore (1335 Webster Street)
The store in the Lower Fillmore is surrounded by a small shopping plaza that includes a completely sketchy Chinese food place, a Popeye's, a discount cigarette store, a weave store, and a Panda Express. Due to its proximity to a large number of low-income housing projects in the Western Addition, it tends to serve a pretty low-income population, and there's been a fair amount of crime in the past, necessitating extra heavy security. I once witnessed a woman, stopped by guards at the door for shoplifting, get a in a fist fight with a guard before running away. It has one of the lowest ratings of all Safeways on Yelp, and not surprisingly, it's been nicknamed The UnSafeway. The batteries and liquor are on lockdown, as is a whole lot else, and it's not uncommon to see someone ahead of you in the checkout line purchasing just a 40-ouncer of Miller High Life, a pepperoni, and a single roll of toilet paper. Also, lines tend to be slower than average because of the high preponderance of EBT cards and WIC vouchers, which creates extra confusion for cashiers despite how frequently they have to deal with them. And there's a Wells Fargo branch at the front of the store where there's always some kind of drama going down. Fun around every corner! 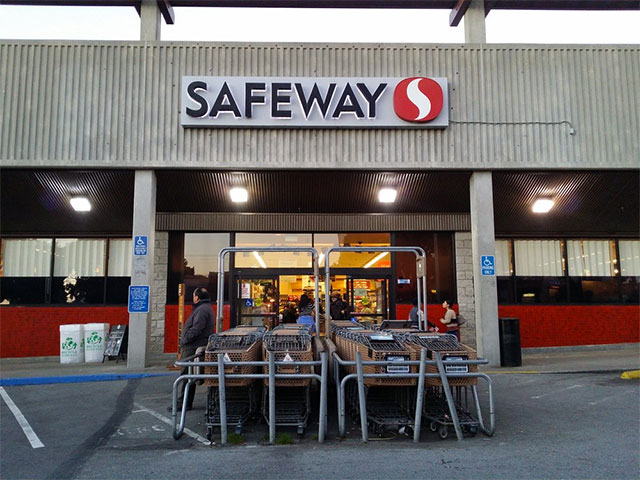 1. Outer Sunset (2350 Noriega Street)
Some Safeways in town get a bad rap because their employees, who are often Asian, don't speak terrific English and therefore can't provide such excellent customer service. That alone does not make a store deserving of bad marks, but that is just one of a host of problems with this Safeway, which one local blogger deemed the Worst Safeway In San Francisco a couple years back  and we and many a Yelper concur. It's not a place where you want to shop for meat or vegetables of any kind, though it should be noted that you will find the pasta sauce with the produce, for some reason. The staff is, by all accounts, angry and unhelpful. Despite being located in the often damp Outer Sunset, someone here saw fit to paint the rooftop parking lot with marine enamel paint that is extremely slippery when wet. Also, as neighbor Eric Kauschen says, "All over the city in just about every Safeway we’ve been to we see a former employee of the Noriega and 30th [store]. When asked they all say the same thing: 'That was the worst place to work.'

This list has been amended to include the Monterey Blvd. Safeway, which many will attest is "the worst."

San Francisco, the "City by the Bay," the "Cool, Gray City of Love" where you can soon live in a storage facility. Actually, the news isn't that dour — you'd really be living above

Less than a week after resigning "by mutual agreement" from her post as Interim CEO of the popular Internet forum network Reddit, Ellen Pao has penned a thoughtful opinion article in the Washington