Jack Halprin, head of eDiscovery at Google, has died according to the Examiner. According to an announcement from his brother on Facebook, Halprin "lost his short but difficult battle with cancer." He was 46.

Known to many as the "Google Lawyer" or "Google Grinch," Halprin was for over a year a central target of protest and ire after issuing Ellis Act evictions to tenants in seven units of a building he owned at 812 Guerrero Street.

Halprin provided a particularly tangible link between San Francisco's technology boom and the displacement of its longtime residents, an association groups like the Anti-eviction Mapping Project seized on with images of protest like these: 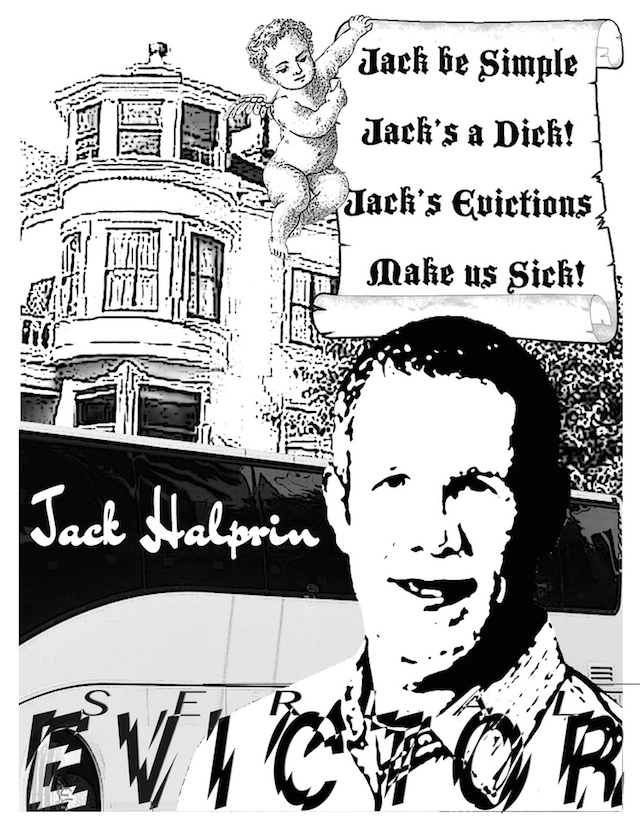 That project has today offered its condolences to Halprin's friends and family via Twitter.

Most recently, per mission Local, in May a Superior Court Judge ruled that, as Halprin had failed to pay the requisite relocation fees to his tenants —a teacher and her partner and son — the tenants could stay put. However, the fates of the other households remained unclear.

Halprin "passed away peacefully this morning," his brother writes, "and is now surely on his way to help Spock compute to the last digit the value of pi and smoke a cigar with our dad Ed." Greg Buckles, an associate of Halprin's, offered these condolences: “Bigger than life. That was Jack. The big guy lost his battle against cancer this morning and the eDiscovery world is a smaller, darker place,” Buckles wrote. “Others can rightly expound on his contributions to our rather esoteric calling as a leader at Guidance, Autonomy/HP and most recently Google. Right now I just miss my friend.”

Halprin purchased the multi-unit building on Guerrero Street in 2012 and moved into one of its vacant apartments. According to a wrongful eviction lawsuit brought against him by resident Susan Coss, Halprin then evicted her from the unit below him such that his one-time domestic partner Daniel Ortiz could move in. This "move-in eviction" would have been legal, but Halprin and Ortiz supposedly split before the arranged move-in, which according to the lawsuit was planned without Ortiz's knowledge, negating the legality of the maneuver.

Protesters block a #Googlebus at 18th/Dolores. They say a Google atty is evicting residents. pic.twitter.com/wrdjLINopO

On the morning of one protest last December, as Halprin neared the Google bus that was presumably his ride to work, he noticed protestors, but chose to approach them. He denied requests for comment as megaphoned protestors gave chase, with observers remarking that he was either smiling or grimacing. Of course, we'll never know which.

According to AAA, this holiday weekend is set to have the highest rate of travel since 2010. But travelers passing through San Francisco International Airport might have a little less stress than folks

I'm bringing you a pre-holiday bit of Apartment Sadness prior to tomorrow's day off, just so you can get it over with, wipe away the tears, and get on with celebrating America. Today's

—
Jack Halprin, 'Google Lawyer' And Target Of Anti-Eviction Protests, Dies Of Cancer At 46
Share this