On Saturday last week, we had marathons on our mind. We had paced a friend for a few laps around Crissy Field for the 24 hour solstice run, an event where the winner ran an incredible 132.6 miles. That's longer than five marathons back-to-back. That same evening, the San Francisco Symphony was hosting a Beethoven marathon, where the program included the Fifth and Sixth Symphony and the Fourth piano concerto, among other pieces. This was a repeat of a 1808 performance where Beethoven unveiled these now revered works. However, it was not marathon-y enough for us, we skipped it, as they split the orchestra and most players took part only in half. Sure, MTT had to gut it out, they could not clone him, and we admire the man for recreating that insane program. Our classical marathon happened the following days, when we went to back-to-back-to-back-to-back operas for the world premiere of Two Women, Figaro, a marathon-within-the-marathon with Les Troyens at SF Opera and a semi-staged Fidelio at the SF Symphony between June 23rd and 26th.

Two Women: Two Women (La Ciociara) is a world premiere co-commissioned with Teatro Regio di Torino, and the seventh commission from David Gockley for SF Opera. Unlike the previous six (quick, can you name them all?), this one is in Italian, as are the composer Mario Tutino and librettist Favio Ceresa.

It is based upon the novel of the same name by Alberto Moravia, which has famously been adapted to the silver screen by Vittorio de Sica, starring the beautiful Sophia Loren, who won an Oscar in 1962 for the performance. Reprising Sophia Loren's role on the SF Opera stage, we have Anna Caterina Antonacci, who can claim movie star looks herself. The story takes us in Rome during World War II, where Cesira (Antonacci) wishes to protect her teenage daughter Rosetta from the atrocities of the war, by seeking shelter in her hometown in the mountains of Ciociaria. This is precipitated by an air bombing of her shop and a rape by Giovanni (Mark Delavan) during the same evening, because when it rains, it pours. Once in the mountains, they find some peace, and even love between Cesira and Michele, a professor up there as a refugee as well. When Michele helps a stranded US pilot and Giovanni comes back for more, all hell breaks lose. Giovanni turns Michele in, Cesira and Rosetta are on the run. They encounter French soldiers who rape and pillage their way through Italy and do no exception with them. 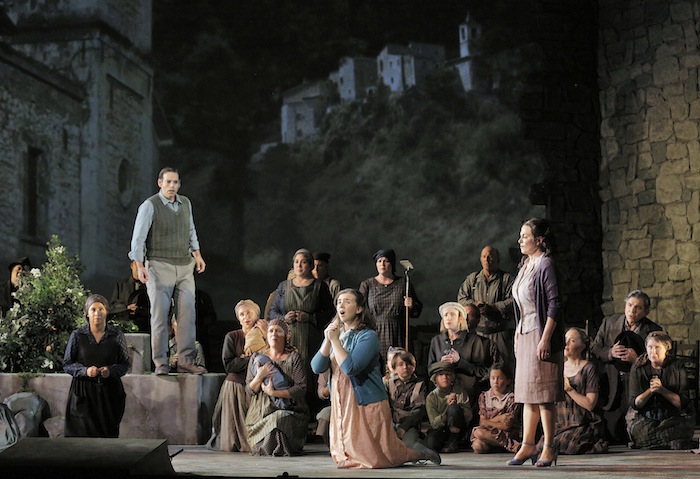 This leads to a very dramatic moment, when the two women's rape happens in parallel with Michele's execution. It's rather tough to stomach, and expertly set to contrasting, percussive, ominous, almost non-melodic music as it goes back and forth between the two scenes. Melodies are not absent from the opera, quite the contrary: its orchestral writing taps into a deep neo-romantic vein that would make Puccini proud. Tutino uses a varied musical palette, that aligns itself with Puccini (both in the musical inspirations, and in the over-the-top drama), but you also find echoes of Wagner and he inserts folk songs, to set up the village at the beginning, but also re-using the song "la strada nel bosco," which was used in the 1960 movie. To us, it reminded us of Edith Piaf's La Vie en Rose in its harmonies, but it's supposedly famous in Italy. Most of the score is lush, and Tutino finds some outstanding beauty in a prayer chorus in the first act, or in an orchestral interlude with a melancholy flute melody towards the end of the second.

Two Women stands out as perfectly hand-crafted. The music interlaces different strands and leitmotivs. You hear an operatic heritage, and you feel Two Women attempts to takes its place within this tradition. It reminds you of Rigoletto when Giovanni curses a "maledizione"; and of Carmen when Michele, like Don Jose, finds again a dried flower in his pocket; and of Butterfly when a musical interlude captures the depth of emotions too powerful for lyrics to do justice. The libretto moves swiftly and never sags. We found the last scene superfluous, we could have ended on that interlude of despair and sadness. Instead, the opera punishes the bad guy through the deus ex machina return of the US pilot, and reconciliates mother and daughter with a glimmer of hope. But we understand some may like to be cheered up a bit, so why not. Two Women does not break new grounds, but what it does, it does well. 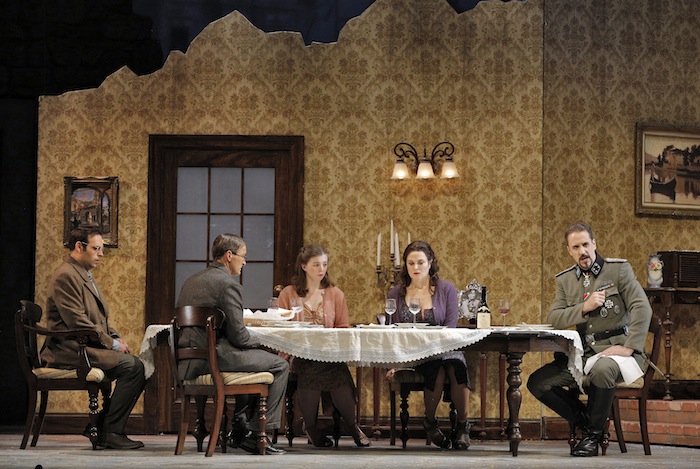 It helps that the cast is first rate. Antonacci depicts a passionate, sassy, engaged, down-to-earth Cesira. Her motherly love shines through. She brought tears to us with her intense singing in the trough of despair. Sarah Shafer, as Rosetta, has an innocent voice, perfectly suited to the role. Delavan is somber voiced, but stiff in his acting, caricatural as the bad guy. Dimitri Pittas has a bright tenor, a lovely voice, and the slightly aloof, slightly awkward attitude of the professor. We were thankful for Joel Sorensen and Buffy Baggott (as a lawyer and his mother entertaining a German field marshal) for the exquisite comic relief. The subject matter is pretty intense, so it's nice to catch a break about soup. And Zanda Svede's peculiar mezzo came back hauntingly a few times, to open the opera and in the village. Nicola Liusotti conducted the orchestra, bringing out the lushness of the score, or the percussiveness of the drama.

The staging, by Francesca Zambello, efficiently moves the action. It changes location a lot, and many characters come in and out, but it's always easy to follow, clear to read, and the climaxes are expertly set up. We come back to this dual scene of Michele's execution and Cesira and Rosetta's rape, alternating back-and-forth, building up against each other, and we can only admire the director's job. 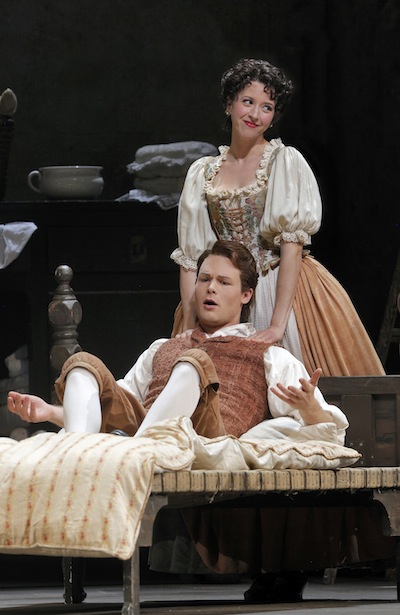 Figaro: Among the novelty of the Two Women, or (to us) Les Troyens, Figaro was a well worn respite. The set is the well known production, build in 1982, and that we've seen in Philippe Sly and Lisette Oropesa in Figaro

SF beers are the country’s second-most expensive. [CBS5] Former DEA agent pleads guilty to extortion in Silk Road case. [NBC] Alcatraz got a bit of a makeover. [FOX] People are starting to