This is part of an ongoing series about the various staircases, and stair streets, of SF. See the first installment here.

The Esmeralda Street Stairs offer a steep but direct climb up Bernal Hill and more than a few rewards to sweeten the deal. Urban hikers are greeted with beautiful plant life, a pair of slides(!!!), and finally, a stunner of a view at the stairs' terminus, right inside Bernal Heights Park.

The stairs date to before 1977 when this picture of Mayor George Moscone was taken on them. Moscone had come up the hill to show his opposition to three homes being developed for the area. "Nothing should be built on Bernal Hill until there is full and complete planning," he reportedly said. An earlier document puts the stairs there sometime before 1975. 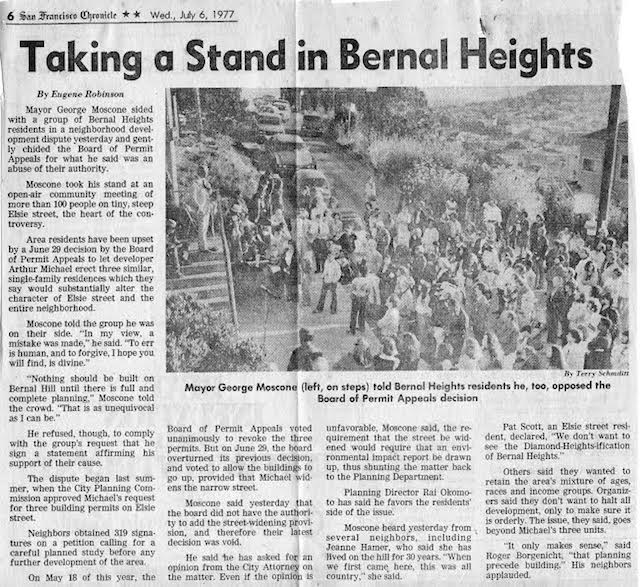 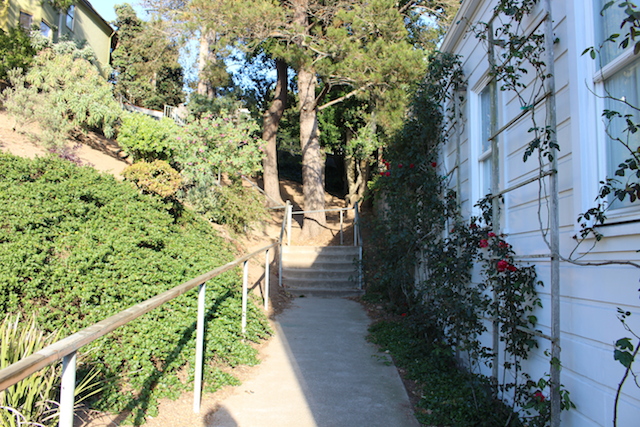 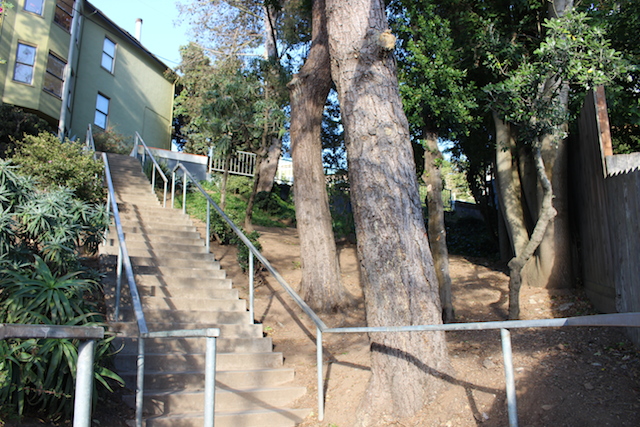 The stairs make up the Esmeralda corridor along with two short blocks between them. The first flight picks up on Coleridge Street, just one block east of Mission Street. And right smack in the middle of the corridor are those built-in, utterly charming metal slides. 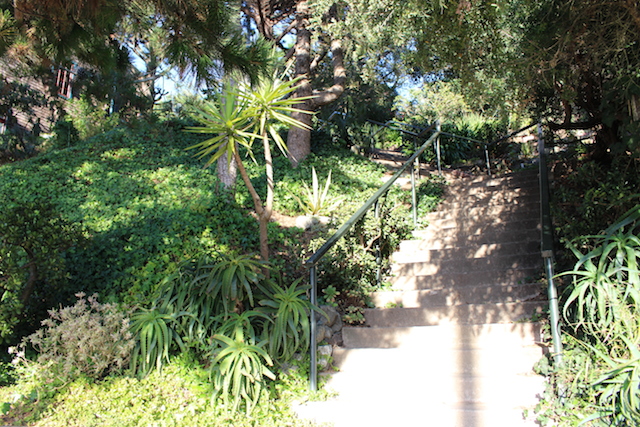 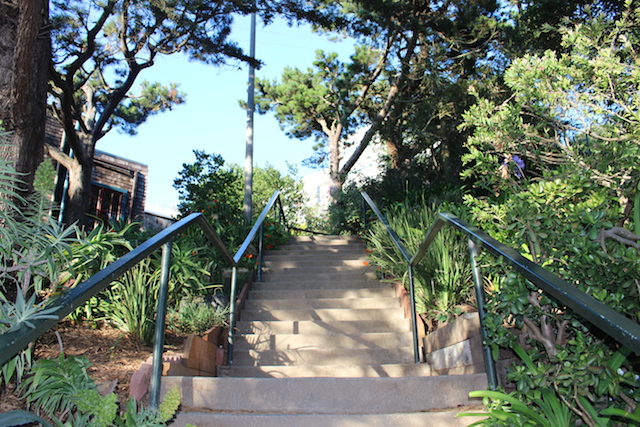 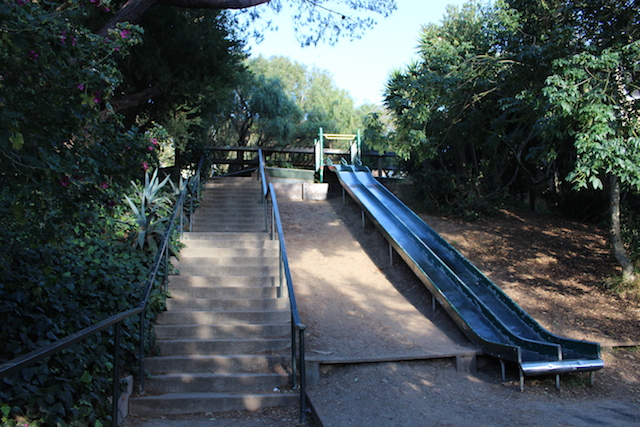 The pair of 40-foot chutes most commonly called the Winfield Street Slides were constructed by local volunteers in the late '70s with assistance from the city. Some of the area artists who conceived of the project, and later established the Bernal Heights Neighborhood Center, were still in the neighborhood as of a New York Times article published five years ago. Those were  Claudia Viek, Buck Bagot, and Michael Nolan, whom SFist can confirm is still a Bernal neighbor.

The slides are a hit with children and adults alike. Cardboard, which you can sit on for a speed-boost, is often strewn about the area.

Notable sliders include Dianne Feinstein who shrieked her way down at a 1979 dedication. Others are Tom Ammiano and Willie Brown, who in his typical fedora and three-piece suit also partook of them at a 1998 rededication. At that time, the slides had been closed for a year of repairs, a process that required nine months of meetings from determined locals. 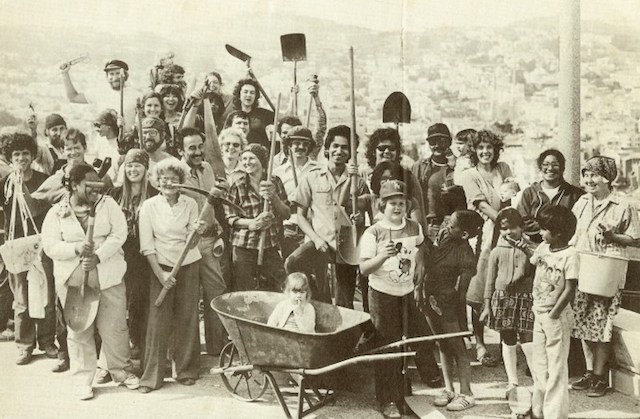 Here's a look back at the rag-tag crew of volunteers and activists who made it all happen. Among them is Nolan, who still lives in the neighborhood and wrote to Bernalwood recently about his involvement in the stairs project.

In the wake of a fun-filled though unsuccessful run for District Supervisor in 1977, I threw my surplus civic energy into making the Esmeralda Mini-Park happen.

I won that campaign. The Northwest Bernal Block had worked mightily for years on the project, believing that between Precita and Holly Parks, there was no area for children to play. But various bureaucratic and legal snafus had stymied the project, even though there was sufficient city funding and support.

Getting the Board of Supervisors to “vacate” what was still officially a “street” and turn it into a park was crucial, because that’s what was required to limit the potential liability of adjoining homeowners and win their okay.

I convened a dedicated crew of nearby neighbors who worked with landscape architect Andrew Butler and Planning Department liaison Lu Blazej . Tom Chiosso of DPW brought tools, materials, and community development grants from the City.

Bernal neighbors volunteered to prepare the land, build the double slide, erect a play structure, and install the planter boxes and trellis on the Winfield Landing.

Last, Nolan recalls that everyone had "hoped that our popular Mayor George Moscone would inaugurate the double slide, but we lost him and Harvey Milk in the tragic assassinations of that fall." 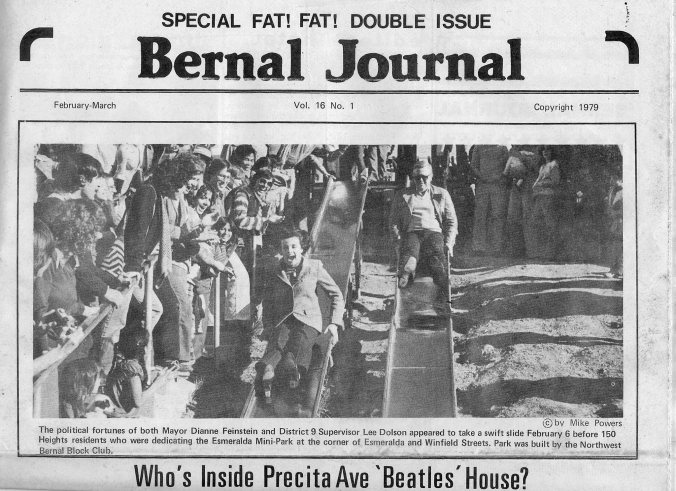 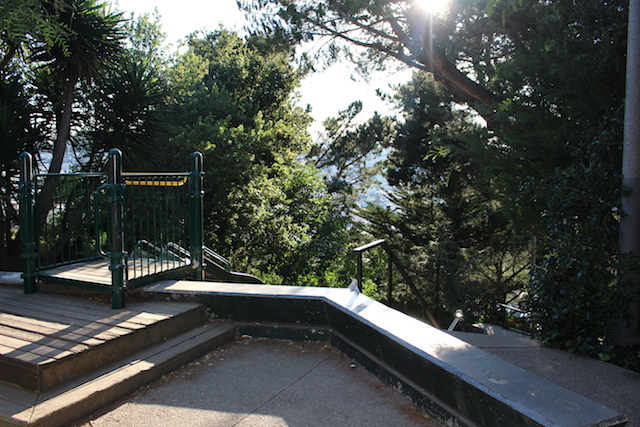 When you're done playing on the slide, head up the last flight of stairs and into Bernal Heights Park. There you'll find 26 acres of even more surprises, ranging from the pleasant (think wildflowers, blackberries, a walking labyrinth) to the less pleasant (like snakes, skunks, and the very occasional coyote). 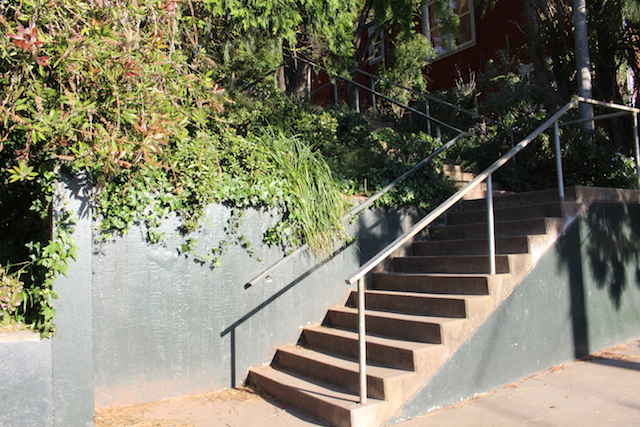 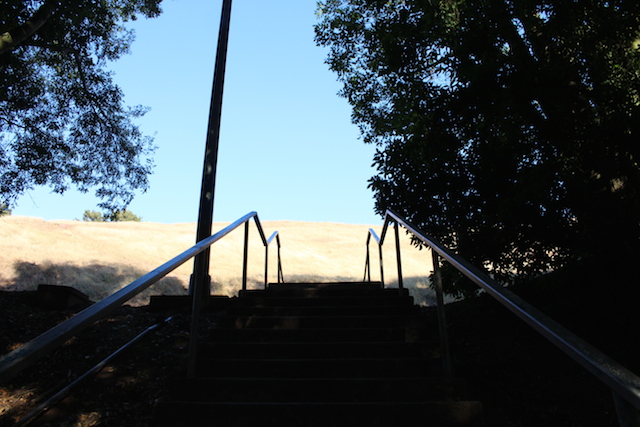 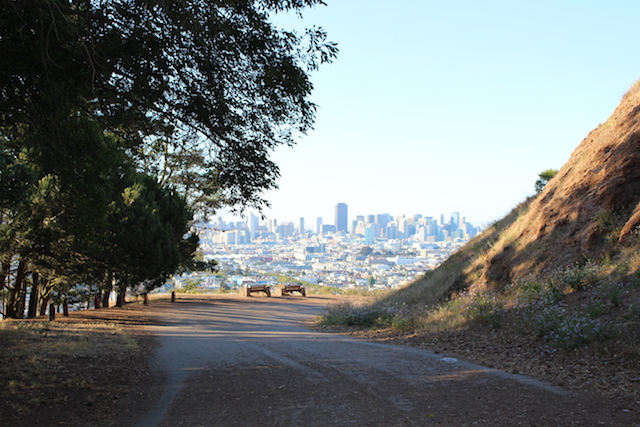 It's a wild world up there, and a quick slide back down. 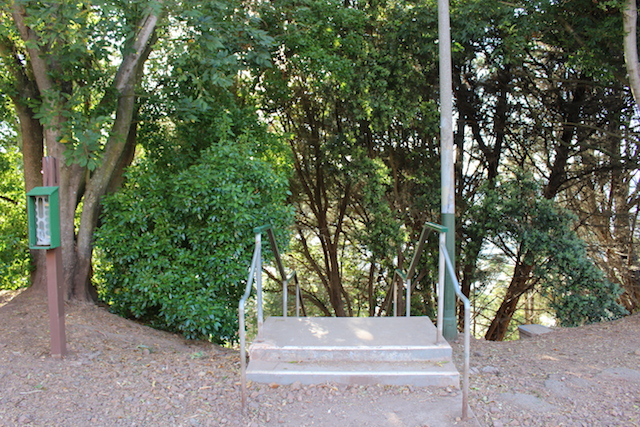 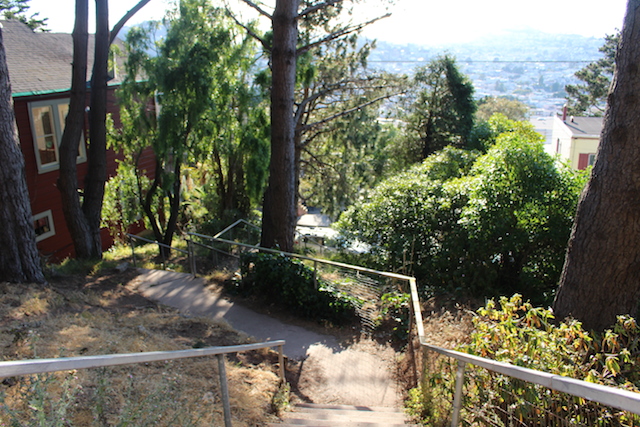 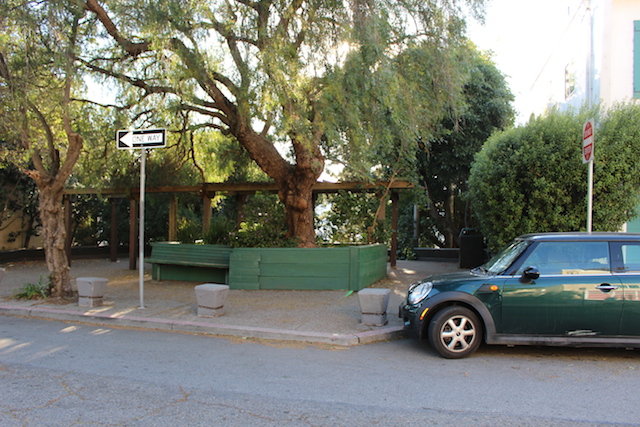 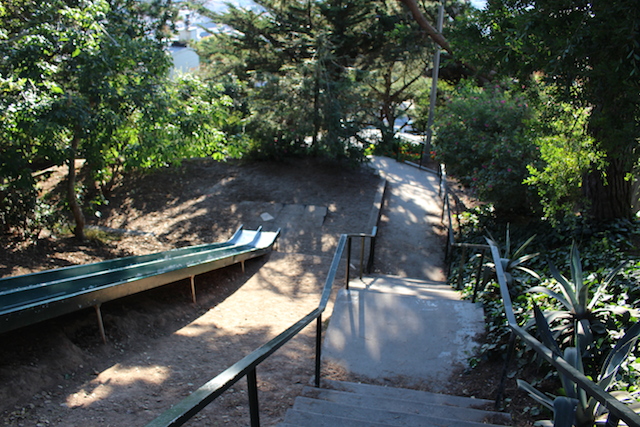 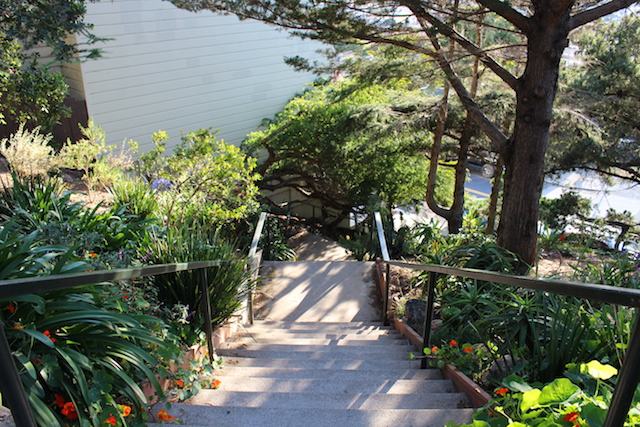 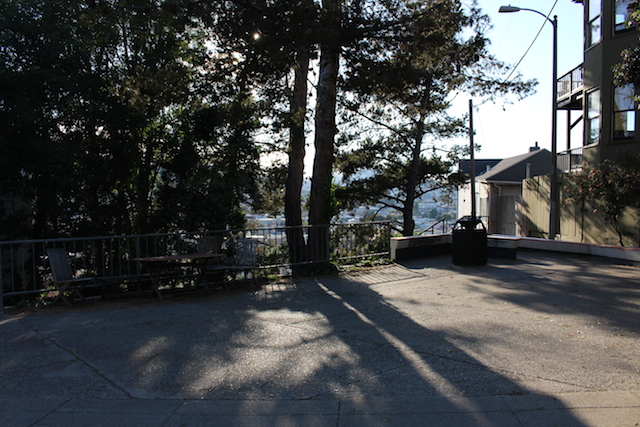 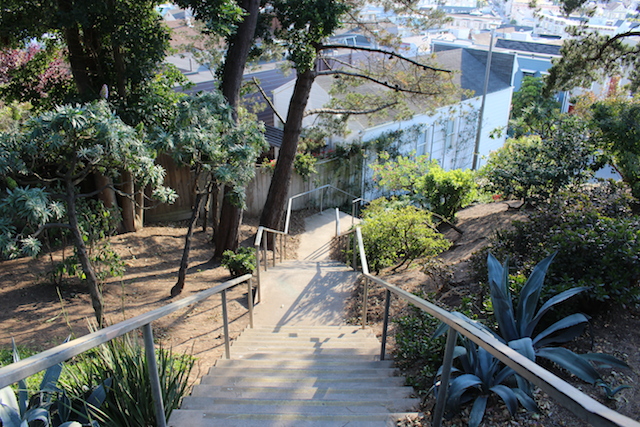 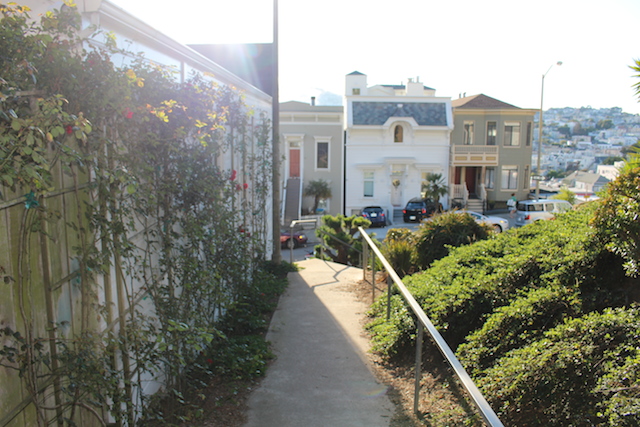 Some more news as regards the stairs and slides. As Bernalwood has been on top of, neighbors have secured City funds to restore the trellis that frames the mini-park, a wooden structure that was in danger following termite damage.

One last piece of ephemera that resonates today is the invitation from Nolan et al. to the inauguration of the park in the first place. Maybe when the trellis is repaired, Feinstein will want another go at the slide? 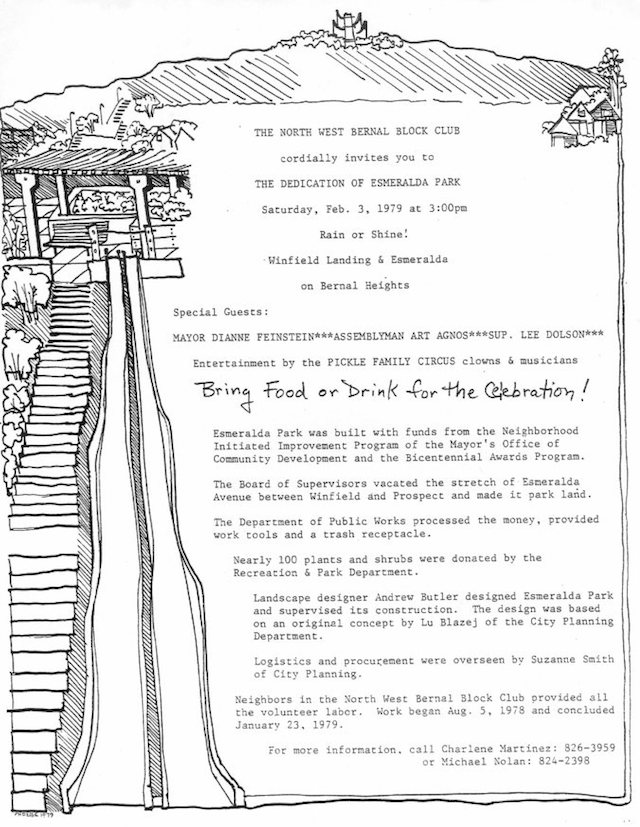 Previously:The Steps Of San Francisco: All About The Filbert Steps On Telegraph Hill

In its first full month on the market, according to one data source, the Apple Watch failed to outsell the already popular health monitoring device the Fitbit. The SF Business Times reports the

Assuming that you, like many locals, slept in or otherwise avoided the downtown madness on Sunday, you can thank I Heart Media SF for doing their Today Show- at-the-Macy's-Thanksgiving-Day-Parade best to cover the

—
The Steps Of San Francisco: The Esmeralda Stairs Up Bernal Hill
Share this