Club Inferno, a glam-rock musical based on Dante’s ‘Divine Comedy’ and playing at The Hypnodrome through August 8, had me at “glam-rock musical based on Dante’s ‘Divine Comedy’”. A revival of a September 2000 production from the now-defunct Paradise Lounge, which itself was a revival of an epic poem by Dante Alighieri from the year 1320, Club Inferno is The Thrillpeddlers’ latest production that takes the old “stroll through Hell” genre and updates it with drag queens, celebrity impersonations and rock-opera power chords.

Club Inferno puts the comedy in ‘The Divine Comedy’, with a Cockettes-inspired zaniness that feels like Rocky Horror Picture Show-meets-The Cramps armed with an endless parade of sensational wigs. The part of Dante is played by Peggy L’Eggs (a.k.a. Matthew Simmons), an ingenue nightclub vocalist sent to the afterlife in a tragi-comic technical stage accident. The glitter-bearded Virgil (John Flaw) guides her through the afterworld’s various points of interest while a genderqueer Satanic figure named Xaron (Birdie-Bob Watt) issues quips and zingers in a wig which you cannot take your eyes off of. 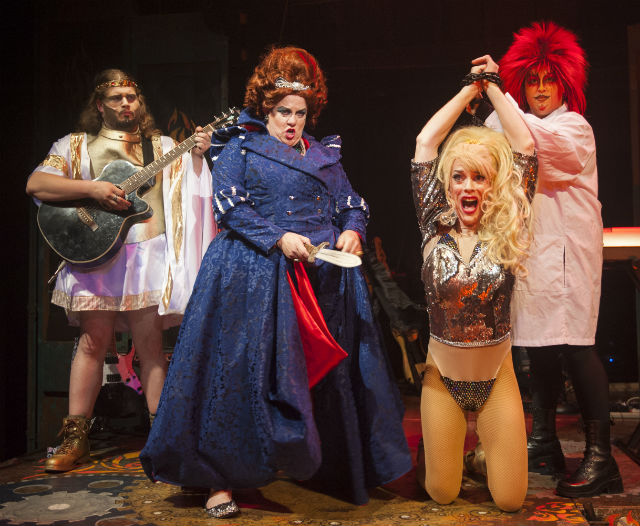 The supporting cast is an embarrassment of riches, many of whom were in the original Club Inferno production from 15 years ago. Leigh Crow, whom you may know as Elvis Herselvis, belts out two magnificent cameo numbers — identifying as female in both! Amber Sommerfeld has a Joan of Arc routine that absolutely soars. Noah Haydon does a song as the Hindu goddess Durga and achieves a stunning visual effect that will remain in your mind for several days.

Obviously, this is not musical theater for the whole family to enjoy. Club Inferno is a drag show and every single number is slathered in drag chic. This production does not have the relentless onstage nudity of the Thrilleddlers’ Jewels of Paris this past spring. There is no nudity at all, and the humor is not even that blue. But Club Inferno is relentlessly and unapologetically a drag show, put on by drag performers and for drag fans. If you go to much underground San Francisco theater, though, it’s safe to assume that you are a drag fan.

There are certainly some problems with the sound in this production. Audio issues take this musical ‘Divine Comedy’ down a level. I’m sure I missed a few one-liners in Kelly Kittell’s outstanding lyrics, and the low volume-levels left some of the vocal harmonies not-quite-harmonized. This is less of an issue in the second act, though, because the musical numbers get bigger and better as the show nears its climax.

You may at times hope for better sound quality, but you will be constantly impressed with the performances, costumes and satisfying pace of this show. For anyone with a soft spot for drag shows and musical theater, Club Inferno is a hella fun night in Hell.

Thrillpeddlers presents Club Inferno at The Hypnodrome (575 10th St.), Thursdays, Fridays and Saturdays at 8 p.m. through August 8. Tickets are available at the Hypnodrome ticket page.

The first trailer for Boulevard, Robin Williams’ final onscreen performance, is here to brighten and darken your day all at once. Directed by Dito Montiel (A Guide to Recognizing Your Saints), Boulevard stars