Sadly, we live in an age when lazy/frugal bar owners junk their beloved vintage jukeboxes because they break too often and cause too much of a headache, in favor of the scourge of bar soundtracks everywhere, internet jukeboxes. (We're looking at you, Kilowatt, Silver Spur, and Pilsner Inn.) Those internet jukeboxes, that give you an infinite selection of music and allow you to trump everyone else's picks if you have an extra five dollars, are the enemy of the good, and everyone should know this already. Nevertheless, there are still a couple dozen neighborhood haunts and worn-in dives across the city where the art of jukebox curation is still being kept alive, and here we bring you SFist's favorites.


Last Call
At this unassuming little Castro bar that looks like a mini ski lodge and was once known as The Men's Room (and before that, The Mistake), you'll find one of the best curated jukeboxes in the city. The disc selection caters to the bar's gay clientele without pandering to it, featuring a good mix of new and old hits  fairly heavily weighted to the old, however. You'll find Fleetwood Mac alongside Prince and Donna Summer. Kate Bush is there but so are Madonna, Kylie, and Cher. And every Gen Xer former goth teenager will be in heaven with a healthy dose of The Smiths, Siouxsie and the Banshees, and The Cure. Also it should be noted this place opens at noon.  Jay Barmann
3988 18th Street at Noe 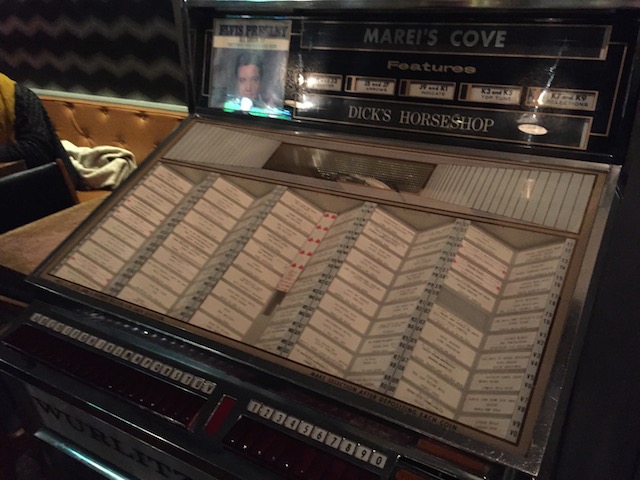 Murio's Trophy Room
If it weren't for Murio's oldest of the old-school jukebox and Pliny on tap, then I don't know what. You probably wouldn't go, I guess. Situated at the literal and logical conclusion of Haight Street, the bar's 2012 redesign took a lot of charm with it, but like that jukebox, old habits die hard. So go ahead, put on Chuck Berry, Johnny Cash, or the Beatles, all of whom are well represented. —Caleb Pershan
1811 Haight Street Shrader and Stanyan Streets 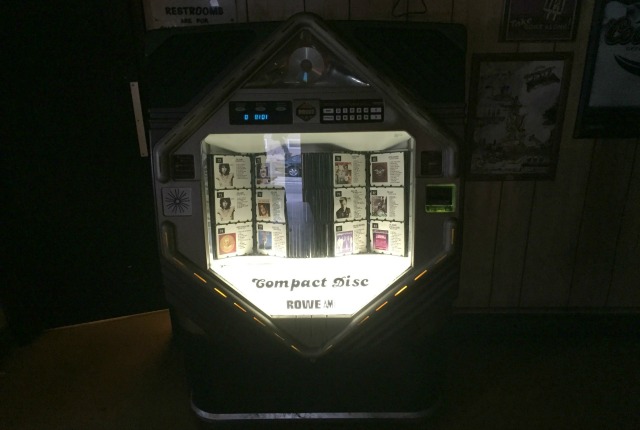 Pittsburgh's jukebox is right by the bathroom, so at times you'll need to breathe shallowly as you make your selections. Photo: Eve Batey/SFist

Pittsburgh's Pub
When I walked into Pittsburgh's last night to take the photo you see above, "Sweet Home Alabama" was playing on their venerable jukebox. I Immediately thought about this scene from Con Air, partially because it contains that song, and partially because everyone in Pittsburgh's looked like they could have been on that doomed prison-breaking flight. There's a solid selection of music your friends' cool older brothers played in the car when they were giving you all a ride to school, and the bartender will always be happy to give you change to play another tune. Clarification: Kelly Stanford, the current night bartender, was not involved in the mushroom selling incident previously mentioned in this post, which took place in the 1980s at a previous incarnation of the bar at the same location. -- Eve Batey
4207 Judah Street at 47th Avenue 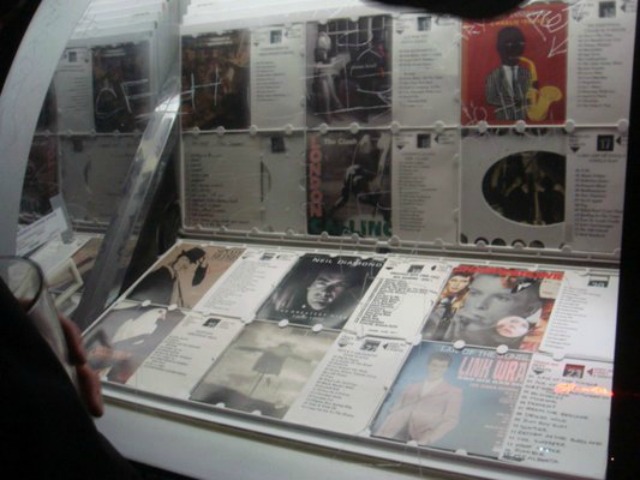 The Uptown
The Uptown's always been a bit grungy, and its jukebox is no exception: with plenty of age-curled CD box covers and just as many sharpie-scrawled setlists, it's the kind of juke you can page back and forth through in a happy-hour glazed haze. Johnny Cash or Nirvana? (Cash) Is Bowie too obvious? ("Changes," yes. "Golden Years," no.) If I put "Rock the Casbah" on three times in a row, will I get my ass kicked? (Yes.) But I love that song! (Go home.) There's also a good pinball machine, so any quarters you don't invest in tunes can go into silver ball futures. -- Eve Batey
200 Capp Street at 17th Street 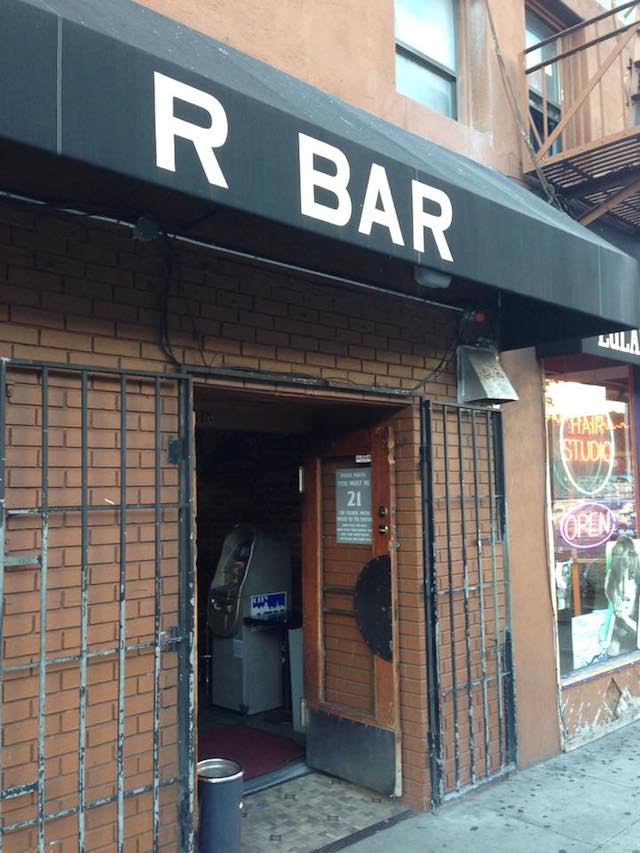 R Bar
Resisting change is what R Bar does, and so it is with their decidedly retro jukebox. The bar has stood its Polk Gulch ground since 1940, though today's crowd might be seen as collegiate and a bit rowdy. Wall art is sure to disturb, and Fernet shots are sort of their thing. —Caleb Pershan
1176 Sutter Street between Larkin and Polk Streets 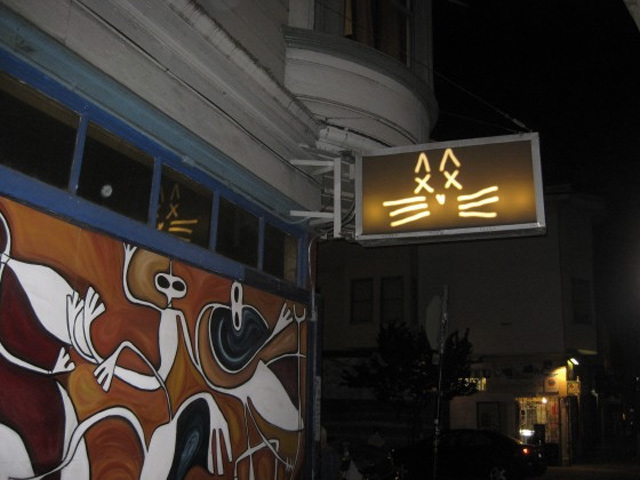 The Blind Cat
We included them in our roundup of SF's best dive bars, and one of the prime reasons the place is great is their jukebox. And like any great jukebox, it's curated to reflect the vibe of the place in its various moods, which include everything from AC/DC, to War, to Merle Haggard, the Ramones, and Aretha Franklin. Drinks are somewhat cheap, though in recent years they've upped and fancified their whiskey game. But definitely note that this jukebox is well used and well known, and you'd better get to it early or you won't hear your picks before last call.  Jay Barmann
3050 24th Street at Treat 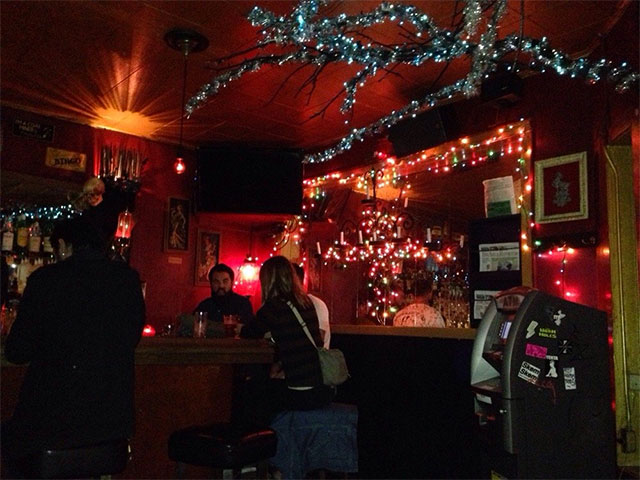 Phone Booth
Before the word "hipster" came to define the Mission, The Phone Booth was a hipster bar with a little bit of an ambiguously gay bent. The well loved jukebox here is terrifically eclectic, with everything from country to punk, shoutouts to Peaches and TLC, and a hefty helping of Morrissey and Depeche Mode. Added bonus: a chandelier made out of Barbies, and a lot of dudes who are in bands.  Jay Barmann
1398 South Van Ness at 25th 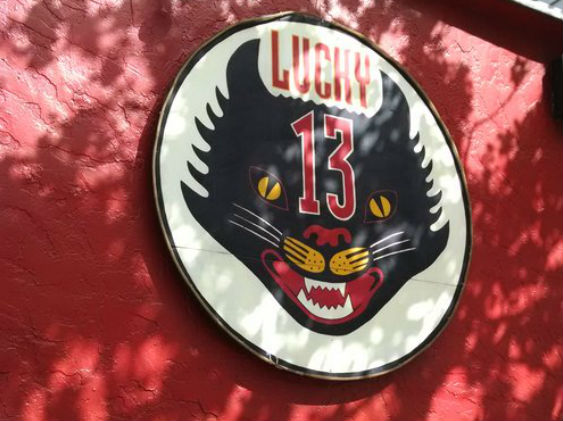 Lucky 13
Lucky 13 may soon to be razed for just as ugly as expected condos, but it’s punk-as-fuck jukebox (and the bar itself) still operate while the condo remains in SF Planning Department purgatory. Plenty of old Descendents. Butthole Surfers and Angry Samoans tunes sit at the ready on a Lucky 13 jukebox that is 100% punk rock. Well, unless you think Joy Division is technically not punk rock. — Joe Kukura
2140 Market St., at Church 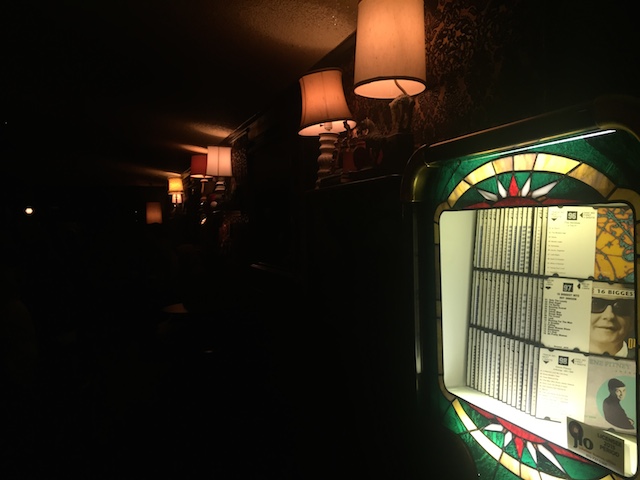 Virgil's Sea Room
Virigl's basks in the calm, cool shadow of El Rio and is a fine establishment at which to enjoy any number of cocktails. A newer tradition, Virgil's has a jukebox to match. We're talking Beyoncé's self-titled album, Midnight Marauders by A Tribe Called Quest, the Wayne's World soundtrack, and Beck's Midnight Vultures—Caleb Pershan
3152 Mission Street near Precita 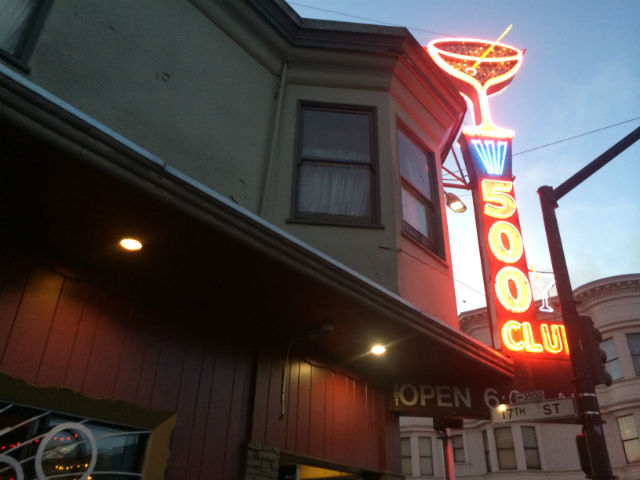 500 Club
As of press time for this article, the 500 Club’s jukebox is broken. This charmingly old-school but very brittle machine offers vinyl Jamaican reggae oldies, Zeppelin, James Brown, Thelonious Monk, the Gun Club and more.”It breaks every week,” one 500 Club regular said of the jukebox. But that’s just another way of saying that the 500 Club fixes their jukebox every week!— Joe Kukura
500 Guerrero St., at 17th St. 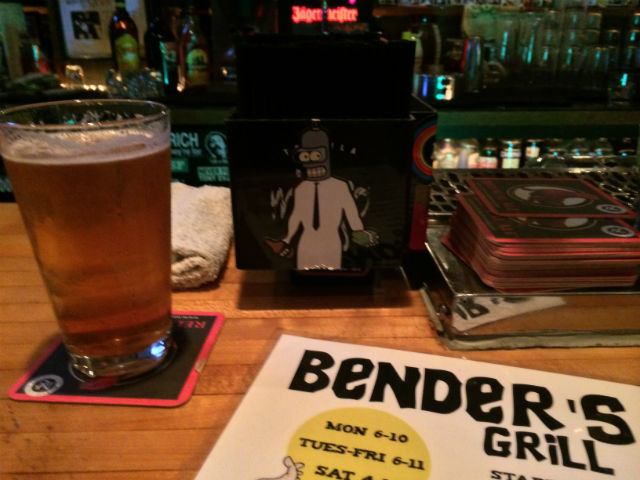 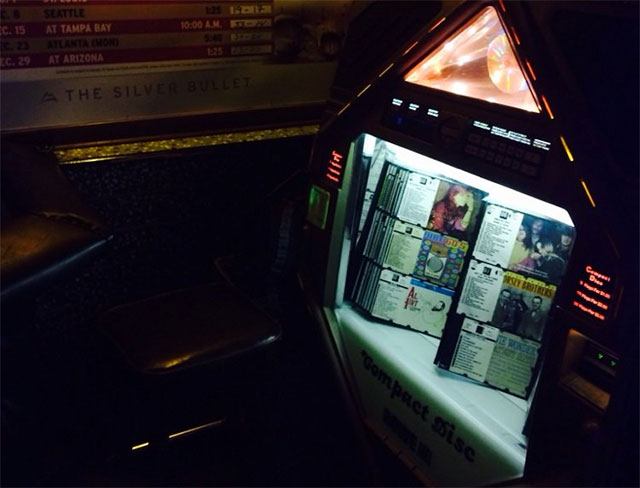 The Geary Club
Also among our favorite dive/old man bars is this small Tenderloin spot that's still going strong  if by strong you understand we mean the elderly ladies behind the bar are still kicking, and they will scoff at you if you order anything besides a shot, a beer, a Manhattan, or a one-spirit-one-mixer highball (well drinks are still $4). The jukebox, like the rest of the place, remains untouched for a couple decades, and one of the most contemporary artists you're going to find on there is Bonnie Raitt. But sometimes, if one of the bartenders gets drunk enough and the place is too quiet, she'll hand you $20 from the till and let you have your way with the thing for hours. Jay Barmann
768 Geary Street at Hyde 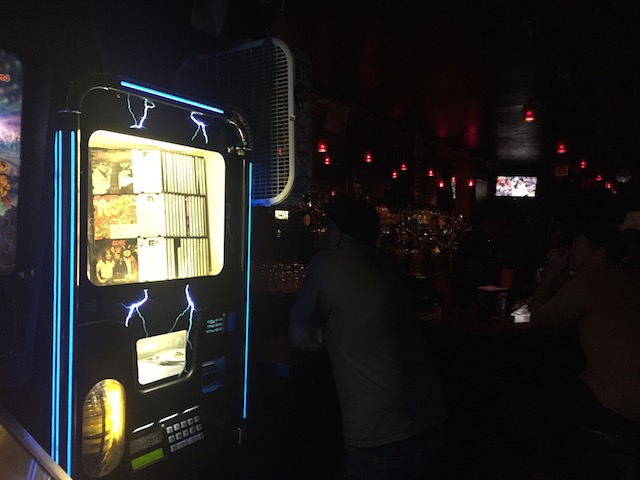 Molotov's
If you're looking for cheap drinks and the feeling that you could be assaulted, then might I suggest Molotov's? In keeping with the bar's anarchic overtones, the jukebox (next to a very janky Monster Bash pinball machine) features such punk-pleasers as Thin Lizzy, Motörhead, and The Stranglers. Other relevant facts are that Molotov's is named for a crude incendiary weapon and that PBR costs you $2 and several dirty looks. —Caleb Pershan
582 Haight Street between Steiner and Fillmore Streets 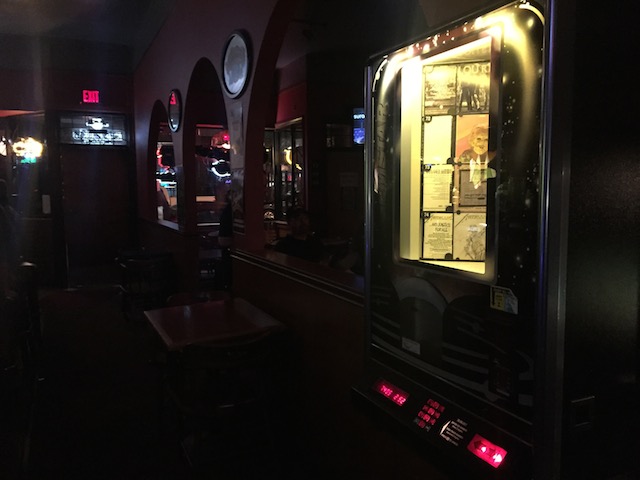 Gold Cane Cocktail Lounge
When times are hard, when Haight street gets you down, when you need a beer in one hand and a pool cue in the other, you can always lean on the Gold Cane. The bar's drinks are stiff and to the point, and the box plays surf rock, Pavement, and The Pogues. —Caleb Pershan
1569 Haight Street between Clayton and Ashbury Streets
Murio's Trophy Room. Caleb Pershan/SFist

We heard a lot about this pilot project over the last year called the Homeless Navigation Center, which is an innovative shelter concept that allows homeless people living in communities with others, pets

Folks hitting the road after the Warriors victory parade or before City Hall's big centennial celebration might have another issue to contend with Friday, as President Barack Obama is scheduled to arrive in