When the iconic Irving Street cafe closed in the Inner Sunset late last year, some mourned and others shrugged — but it's unlikely anyone thought that a massive international chain would sneak into the space and operate illegally. But that's what's gone down!

The Irving Street Cafe had been in its digs at 716 Irving Street for quite some time — long enough that it was known as the place that local notable Chris Isaak went before he was famous, during the height of his popularity, and again after his star has leveled off. After 26 years in business, it closed this January, about two months after the property's owner filed this Zoning Referral For Health Permit (I uploaded it so you could see for yourself) saying that the new permit was in reference to a continuation of an existing business that was changing ownership, one that is not a formula retail chain. 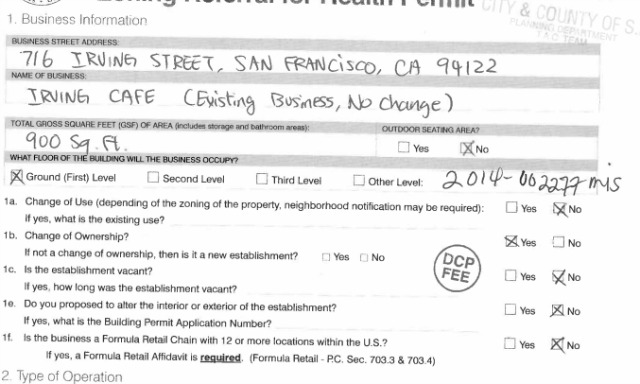 Though no additional documents appear to have been filed with the city, Hoodline reports that a Quickly bubble tea joint has "soft opened" in the space, which would come as a surprise of anyone familiar with San Francisco's rigorous application requirements for any formula retail chain wishing to open additional outlets in San Francisco.

As Hoodline ably notes, "In 2004, city regulations began limiting chain businesses by classifying them under conditional use permits that are approved on a case-by-case basis by the city planning department," a process that includes notification of neighboring businesses and a series of hearings. Until that business is approved, it cannot open.

Quickly certainly falls under the heading of formula retail, with over 70 locations in Northern California alone.

According to a source who spoke to Hoodline, "I heard a rumor that they were improperly permitted and were basically just operating with the old Irving St. Cafe permits," a rumor that certainly seems supported by the Zoning Referral For Health Permit I showed you above.

A search I did for Planning Department documents did not demonstrate that the business filed for a new conditional use permit — but it did turn up a complaint filed May 1 on the grounds that the location was "Formula Retail" and "Formula Retail opened without permits or CU."

Gina Simi, Communications Manager for the Planning department, tells SFist that the area in the Inner Sunset where the new Quickly sits is zoned for formula retail, but that any chain stores that want to open up there "must still go through the process of obtaining a conditional use. And they have not done that. So that is what we are noticing them on."

We're moving on this as quickly as we can," Simi says.

Old timers will likely get a kick out of this tale of lawless bubble tea drama, as this is not the first time a Quickly has opened in SF sans permit. Back in 2007, then District 4 Supervisor Ed Jew was accused of shaking the owners of some local Quickly branches down to help them duck these same formula retail laws. Jew ended up in jail after demanding bribes, which is why we call him "Tapioca Ed." (In fact, after reading this report my SFist co-founder Rita Hao reminded me that she and I visited one of Tapioca Ed's illegal Quicklys back in 2007. Good times!)

Of course, this stretch of Irving is District 5, the territory of London Breed, who did not respond to our request for comment at publication time. But be sure, if she or anyone else calls me back, we'll update this story.

143 Albion is quite the address. Remodeled to become a four-bedroom residence in 2009, it's now on the market for $6.5 million, which Curbed indicates is one of the highest asks ever

With the Van Ness McDonald's already gone and the Third and Townsend McDonald's highly likely to to disappear soon, Egg McMuffin and Big Mac aficionados are going to be even sadder about the