One of the iconic "eyeball with hat" masks from the legendary San Francisco band The Residents has been stolen, and police are asking for your help. 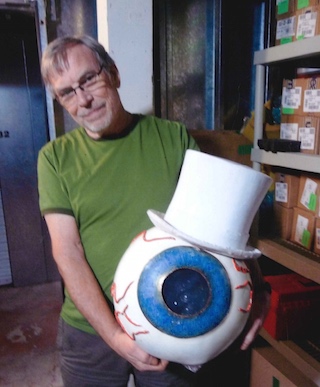 The unusual looking mask was shipped back from a museum in Seattle to its owner in San Francisco on May 5, but the owner was not home at the time. According to SFPD, the package was signed for by somebody else, but unfortunately the signature is illegible.

The owner, who loaned the mask to the museum, says the mask is valued at $100,000. Along with the mask was also an original photograph of the The Residents, which the owner values at $20,000. Although the original photo shows the top hat as black, it is now painted white.

The Residents are a San Francisco-based avant-garde experimental band whose history dates back to the mid-60s. The actual identity of the band members is unknown, as they do not grant interviews and no confirmed photographs of them actually exist without them wearing their signature eyeball masks with top hats and tuxedos. Even when they perform, they do so in costume.

The stolen photograph, which shows the band standing near the Golden Gate Bridge, was used on the back cover of 1979's Subterranean Modern, a compilation album from their own Ralph Records.

Anyone with information about the whereabouts of the mask is being asked to call the SFPD tip line at (415) 575-4444.

The stolen Residents mask as it looks today (SFPD)

Many people were panicked when brunch-time favorite Dottie's True Blue Café abruptly, temporarily closed back in February  it turned out to be due to one of the employees suffering a severe burn and