"'You've got happy employees, you've got happy customers, you've got happy shareholders," the president of an investment fund recalls grilling Uber's CFO, Brent Callinicos, to Business Insider. "The holy triumvirate are all really excited about your company. Why are you going to risk that and push the employees salary down 5%?'"

"Because we can," Callinicos reportedly responded without hesitation.

Certainly taking a higher commission would help justify Uber's high valuation, which some put at $50 billion as the company looks to another funding round according to TechCrunch. Yes, that may seem like a backwards way to balance the books and meet expectations. But, reports Forbes, the company appears to be taking that route with a test to increase their commission to 30 percent in some cases from the already high 25 percent.

The pilot program for the new commission will begin in San Francisco and will only pertain to a small percentage of new UberX drivers. That 30 percent commission just applies to their first 20 rides in a week, and then they'll pay 25 percent on their next 20 rides, and finally, 20 percent on any rides beyond that. 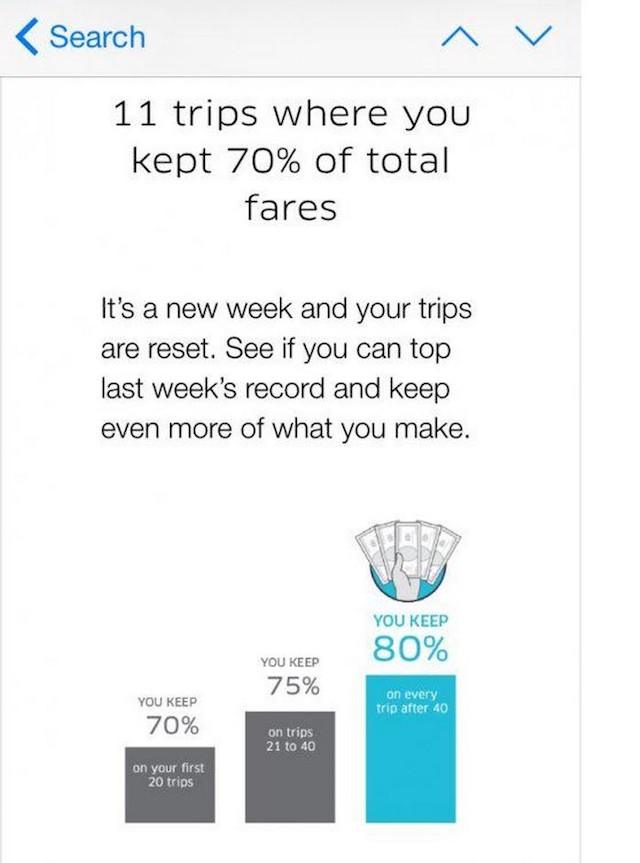 The new system, then, incentivizes drivers who drive more rather than those who are truly part-time, encouraging loyalty from the contractors Uber calls driver-partners. "Exploring a 30% commission," Forbes remarks, "suggests that no matter how low the price goes, new drivers are still willing to sign up."

Said one driver, “You really can’t take advantage of that 20%... You get irritated until you get to the point where you’re just used to it being 30%.”

Previously: Yep, Uber Is Getting In The Delivery Game, Big Time

From the Uber driver app, obtained by Forbes

A trio of baggage handlers at Oakland Airport have been charged with conspiracy to distribute, and possession with intent to distribute, 100 kilograms or more of marijuana. As the AP reports, the three