A lot gets said about Airbnb in relation to average moms and pops and everygal/guys who are renting rooms to tourists for a little extra cash, or renting their apartments while they're out of town for a week. But what we haven't talked enough about are the people who have turned the Airbnb service into their own little cottage industry raking in premium short-term rents for properties they don't even live in without having to deal with pesky tenants, tenant law, etc. Well now Supervisor David Campos has commissioned a report from the Budget and Legislative Analyst’s Office, and it just came in Wednesday, and it finds that, unquestionably, the rental housing stock in a number of neighborhoods is being greatly impacted by these so-called "commercial hosts" whose properties would otherwise be available on the long-term rental market.

Per the report, "Commercial hosts for entire units are defined by the Budget and Legislative Analyst as "those who probably do not live or could not live in their short-term rental unit and therefore rent it out as a means of generating income. For commercial hosts renting out rooms on a short-term basis, the motivation would be to cover rent or mortgage payments that would otherwise require having a roommate. The next best uses of the housing units for such hosts in the absence of the short-term rental market would be living in the unit themselves, placing the unit on the long-term rental market, or getting roommates. Commercial hosts are thus assumed to be removing housing units that would otherwise be available for the long-term rental market."

Taken as a percentage of total vacant housing units, these Airbnb rentals thus represent between 29 and 40 percent of the available housing in the Mission alone. In the Haight, it's 32 percent, with a total of 132 units available on Airbnb.

Some of you may be quick to shout in the comments that this has everything to do with rent control, and if landlords weren't so scared of being stuck with tenants forever, they wouldn't be doing such things. But as the report notes, the problem is the same for lease-holders renting rooms (legally or illegally) on Airbnb simply because they don't want a full-time roommate. They are also removing potential shares from the larger market, and helping drive up demand and prices in the process.

They estimate that between whole unit listings, shared rooms, and private rooms, the total number of these units being rented by commercial hosts is close to 2,000, or approximately a third of all Airbnb host units citywide, but this can't be absolutely confirmed via Airbnb data alone.

Also, the report notes, "A number of the neighborhoods with the most commercial hosts also had high numbers of evictions in 2014 according to the City’s Rent Board data."

Airbnb has responded, with spokesperson Christopher Nulty saying, "This [report] comes from the same people who want to ban new housing in the Mission, ban home sharing and make San Francisco more expensive for middle class families. Home sharing is an economic lifeline for thousands of San Franciscans who depend on the extra income to stay in their homes. Supervisor Campos’ proposal would make it even harder for middle class families to stay in San Francisco and pay the bills. A recent report from the City Planning Department made significantly more accurate conclusions about short-term rentals and the housing market."

He notes that the Planning report suggested that it would take 257 days a year of short-term rental to outcompete a long-term rental agreement.

It remains to be seen how any future regulation of Airbnb hosts can be enforced, given that Airbnb would not release data on its hosts to the Planning Department so that they could cross-check registrations on their new database. But Campos is pushing for a 60-day-per-year cap on all short-term hosts, while a ballot measure headed for the November ballot is angling for a 75-day cap, as the Examiner reports.

Below, a map compiled using the Airbnb data, and indicating the concentration of commercial hosts vs. casual hosts, as estimated by the BLAO. 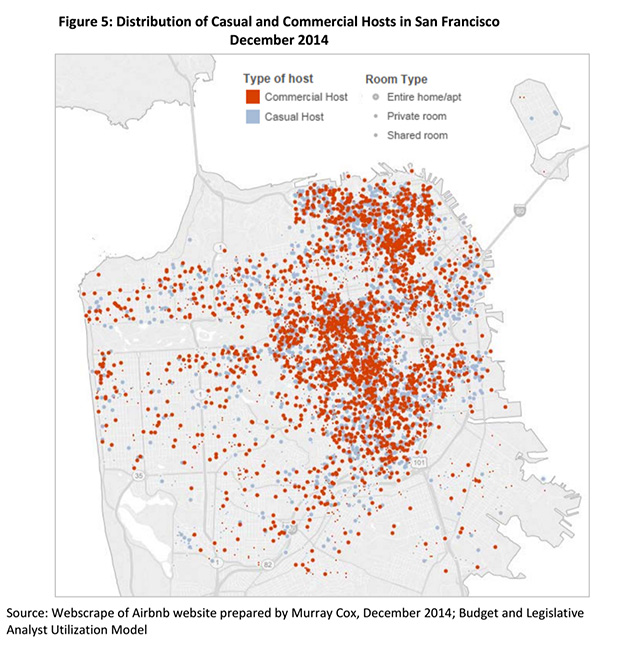 Using the mapping tool MAPfrappe, a Texas-based storage search company, of all things, has done us a solid and given us a good look at how San Francisco stacks up in size compared