According to a Facebook event to bid farewell to the 40-foot tall dancing woman sculpture that's graced Treasure Island since 2011, a previous de-rusting didn't fully protect the piece from sea breezes, and "Bliss Dance," as she's known, is coming down on May 18th. It's unclear whether she'll return to Treasure Island or find a new home.

Marco Cochrane is the sculptor behind Bliss Dance, which was originally built for Burning Man before it was relocated to Treasure Island. Born to American artists in Venice and raised in Berkeley, Cochrane is currently at work on another sculpture, this one the third in the series, and that's being crowdfunded right now. Like the sculpture on Treasure Island, it depicts the same woman, Bay Area-based singer and dancer Deja Solis. 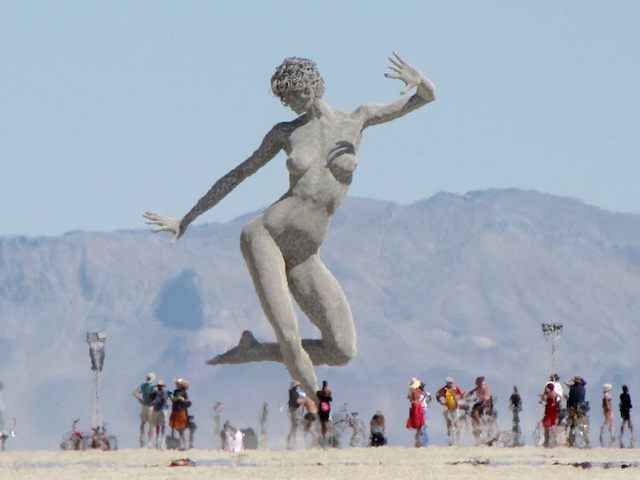 “The piece is about the ultimate expression of humanity," Cochrane told Matador Network in a 2011 interview. "A woman who is genuinely happy in her own space, when everything is okay, they’ll dance.”

Made of stainless steel and covered in 1,000 LED lights of varying colors, Bliss Dance was illuminated in the evening and controllable (at least in theory) by an app that let viewers adjust the light colors on the statue from their phones.

Per the Black Rock Arts Foundation, Bliss Dance would remain on Treasure Island "until further notice." That notice seems to have just been given, and SFist has reached out to event organizers to learn more.

Here's the new Indiegogo promo for "R-Evolution: The Woman Stands."

Joe Lacob, the majority owner of the Golden State Warriors, has come out swinging in the Business Times with regard to that shadowy Mission Bay Alliance that emerged last week with the goal

We've been hearing news for a couple months now about Belga, the new Belgian concept coming to the grand former Cafe Des Amis space on Union Street, and now it's finally going to