We've talked before about some of the best vegetarian and vegan dishes around town, but today we're focusing on some unsung and really delicious vegetarian options that can be found on some of the unlikeliest of carnivorous menus. San Francisco is filled with top-notch restaurants where being a vegetarian is hardly a disadvantage, and is mostly a pleasure  and the trend of making vegetable dishes more of a focus on local menus goes back at least five years. But there are actually a number of great things to eat for the veg set (if not always vegans) at places that are otherwise catering entirely to meat-eaters, including several barbecue spots. Below, your primer.


The Fried Veggie Po' Boy at Brenda's Meat & Three
People always seem surprised when I suggest we go to Meat & Three, saying things like "but you don't eat meat!" I already know that I don't eat meat, my dear, well-meaning friends, but that don't mean I don't eat FRIED. And that's what we're talking about when we talk about this po' boy: it's piping-hot cornmeal-fried cauliflower, okra, and yams paired with lettuce, tomato, and pickles and smothered in (vegan) chipotle remoulade, all on a pillowy roll. It's the perfect blend of salty, sweet, acid, and grease, and it's HUGE. -- Eve Batey
919 Divisadero Street, between McAllister and Golden Gate 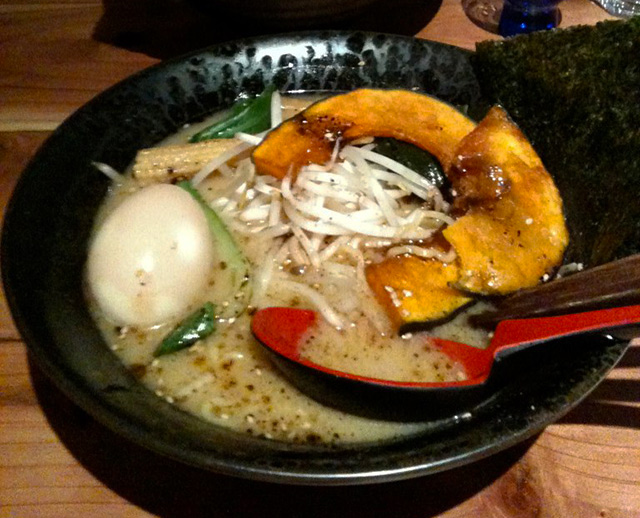 Miso Ramen at KenKen
Though a lot of ramen aficionados will swear up and down that thick, porky, tonkotsu broth is the only kind of true ramen broth there is, in Japan that's totally not the case. Ramen shops will specialize in all kinds of varieties, and miso ramen can be just as, if not more delicious than a pork broth if it's made well. KenKen Ramen's miso ramen is umami-rich and delicious, and comes in both vegetarian (with a soft-cooked egg in it) and vegan versions, and chock full of vegetables. It's a perfect, soul-warming bowl of food for San Francisco chilly summer (or spring) nights.  Jay Barmann
3378 18th Street between Mission and South Van Ness 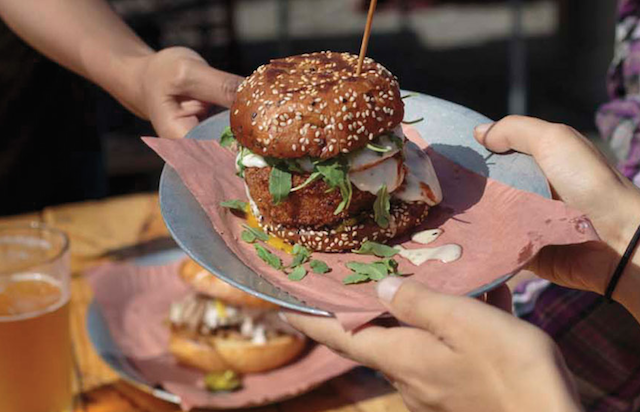 The Grits and Egg Sandwich at 4505 Burgers & BBQ
With roasted green chili peppers, Oaxacan cheese, and an egg on a butter-griddled bun, who needs a burger? Where often vegetarians fear to tread — barbecue spots — this item at 4505 Burgers & BBQ should eliminate any trepidation and replace it with anticipation. The slab of fried grit patty is slightly spicy, crispy, and hearty. The egg atop is, as they say, gravy, and it kind of becomes that. An aside: if you aren't getting an egg on top of a regular burger at 4505, then you might want to reevaluate your choices. Carnivores take note: anyone can order the grits and egg sandwich, and most people that do leave happy and full. — Caleb Pershan
705 Divisadero Street between Fulton and Grove Streets 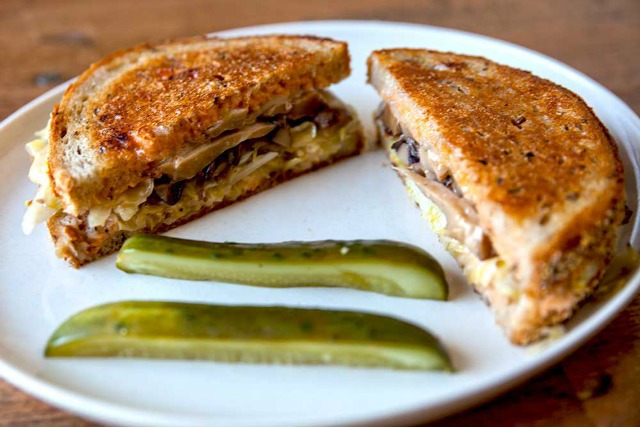 The Smoked Trumpet Mushroom Mushroom Reuben at Wise Sons Deli
As a longtime vegetarian, my reaction to fake meat is like Geena Davis' when she tastes the piece of steak that went through the teleporter in The Fly — it tastes...wrong. But I do enjoy foods that captures the spirit of a meat dish, which is exactly what happens with this sandwich, a gloriously messy pile of mushrooms, melted swiss, kraut, and Russian dressing on rye. It's my favorite sandwich in San Francisco right now, no joke. Even if you typically eat meat I urge you to give this one a try, as it feels decadent and comfort-foody in a way corned beef never did. There's even a vegan version, and you Paleo folks can even order it sans bread. Whatever, just try it. -- Eve Batey
3150 24th Street or 736 Mission Street 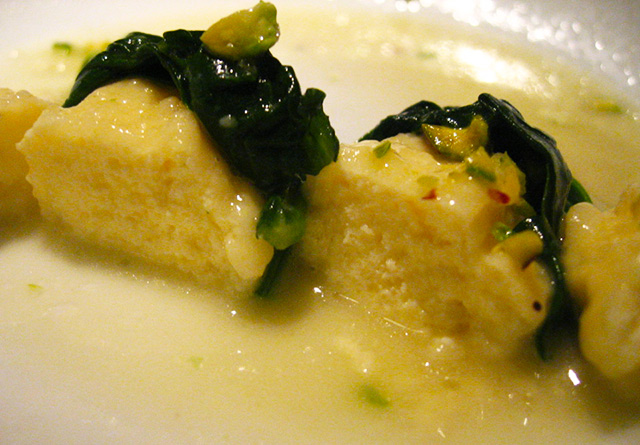 Zuni Cafe's Ricotta Gnocchi
Longtime chef and California cuisine champion Judy Rodgers (who passed away in 2013) perfected Zuni's gnocchi-making technique, which she showed to Epicurious in this video demo from 2008. Ricotta gnocchi was one of Rodgers' personal favorite dishes, and Zuni's version is a testament to her love, and her skill with Italian cuisine. They are meltingly light, perfectly soft, and doused in butter, and come in various, simple seasonal preparations throughout the year  the current menu serves them with dried capers and lemon zest. And most importantly, it's the kind of pure, simple, entirely pleasurable dish that satisfies any vegetarian or omnivore.  Jay Barmann
1658 Market Street at Rose 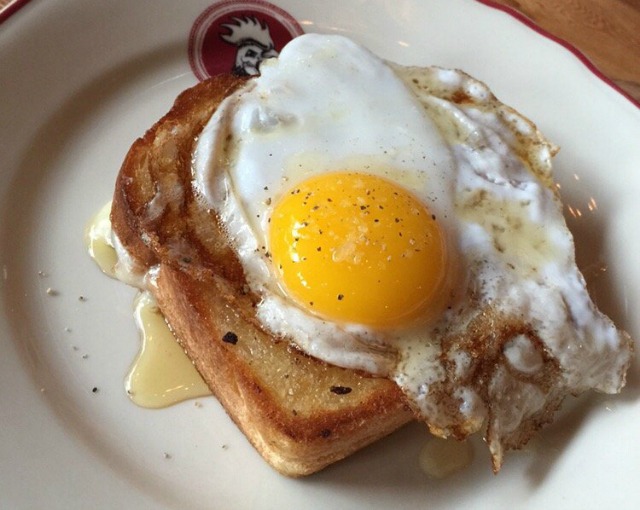 The Grilled Cheese With Duck Egg at Cockscomb
Vegetarians might shy away from offal-master Chris Cosentino's Cockscomb, but those doing so will miss out on one of the best grilled cheese they'll ever have. Made with taleggio (one of the most deliciously stank cheeses ever), buckwheat honey, and shaved truffle, it smells a little like your hotel room that wild weekend you still pull out of the spank bank to this day. Did I just gross you out? If so, I'm sorry, but I can't lie: this sandwich captures the funk of great sex, but you don't need to shower, shave, or dress up to get it in your mouth. Open wide. -- Eve Batey
564 4th Street 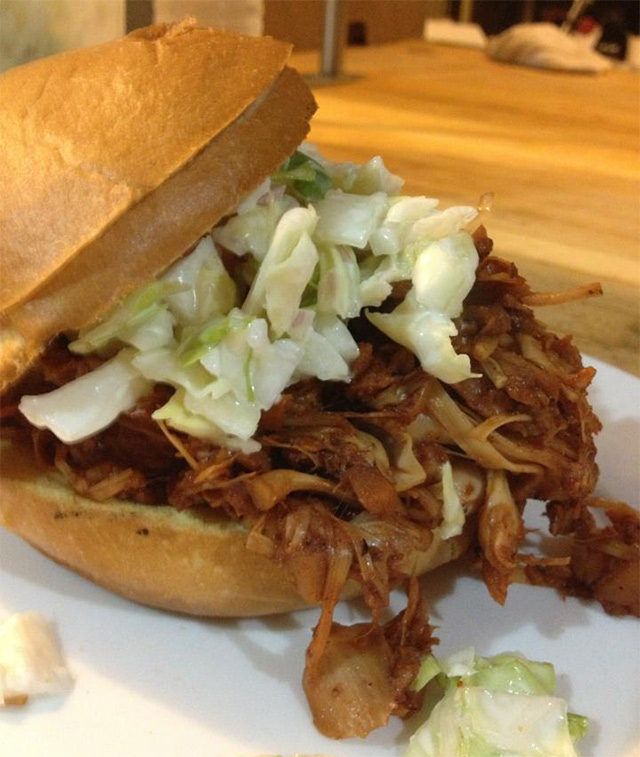 Smoked Jackfruit 'Pulled Pork' at Sneaky's BBQ
Probably the best vegan barbecue option in the city  with an honorable mention to CatHead's Maker's Mark mushroom  is Sneaky's marinated, smoked and pulled jackfruit, which they use to make delicious sandwiches, platters, and tacos at their weekly pop-up events. They also do delivery and catering, which is good to keep in the back of your pocket for feeding a crowd of omnivores. But you can find them regularly popping up at Vinyl Wine and Coffee Bar (Divis and Oak) and El Rio.  Jay Barmann
Various locations 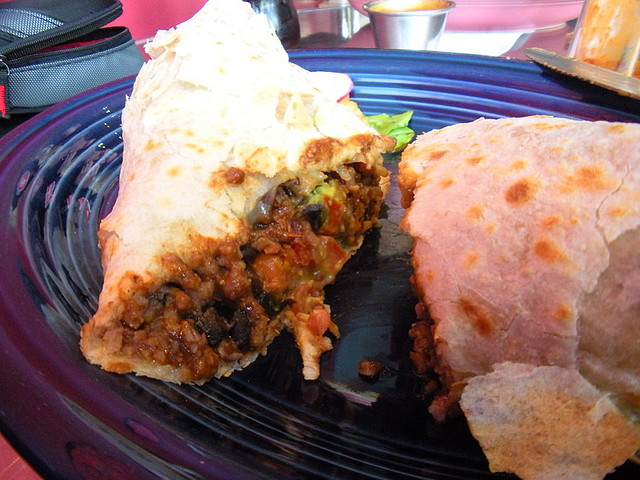 Tofu Mole at Papalote
Mole at Papalote is prepared according to co-owner Miguel Escobedo's grandmother's recipe and it's widely and rightly revered. Get the savory, chocolatey sauce with grilled tofu either on a burrito, in a taco, or on its own. It's a great vegetarian option at a place where, say, the triple threat burrito with three kinds of meat is a popular item. At either of Papalote's locations (so named for Mexican kites) also don't overlook the perfectly spiced vegan soyrizo, if you're in the market for veggie options. — Caleb Pershan
3409 24th Street between Valencia and Poplar Streets and 1777 Fulton Street between Masonic and Central Avenues 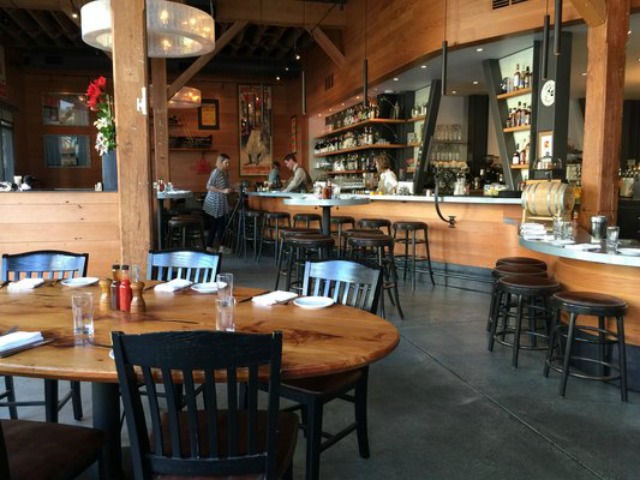 The Roasted Spring Vegetables and Cheddar Grits at Boxing Room
As with other entries on this list, you might not expect to find a vegetarian fave on the menu of a Southern-cooking joint like Boxing Room. I was very curious to see how their chef, Louisiana native Justin Simoneaux rose to the meatless challenge! He blew me away, with a seasonally-rotating plate of perfectly-roasted (never too mushy, never too crisp) vegetables paired with seriously legit cheese grits and green garlic butter pungent enough to keep all of Anne Rice's (LA and CA) characters at bay. -- Eve Batey
399 Grove Street at Gough
Photo: Josh Lee/Flickr

“For 15 years now, it’s been a break-even operation,” founder Dave Eggers said of his small, Mission District-based publishing house McSweeney's, in an interview with the New York Times last October. “I’

Possibly clinically depressed, possibly otherwise mentally ill, but seemingly always on the move with the cunning and quickness of a fox, Marilyn Hartman has been arrested yet again, this time at Chicago's O'Hare

—
The Best Vegetarian Dishes At Meat-Centric SF Restaurants
Share this