With the news that Winchester Mystery House will host overnight stays and serve alcohol, we got goosebumps and decided to make a little inventory of the Bay Area’s most purportedly haunted locations  even though it's nowhere near Halloween. Rather than busting myths, let’s perpetuate them, shall we? Here's a list of San Francisco's and the greater Bay Area's most supposedly haunted hot spots (technically, they’re actually “cold spots” according to many ghost-encounterers). And if you know of other supernatural haunts that we’ve missed, please shriek and howl in the comments.

NOTE: This list only includes public places and establishments, not private homes or residences. Those poor residents already have enough problems with the flying chairs and the doors slamming all the time, they don’t need any more looky-loos poking around their property.

Winchester Mystery House (San Jose)
It is verified truth that Mrs. Sarah Winchester felt she was being harassed by ghosts whose corporeal lives were taken by the invention of the Winchester rifle. The hauntings would never end, according to a medium she consulted, unless she kept building rooms onto the mansion else the ghosts would get her and kill her. They got her in 1922 (official cause of death was heart failure), but not before she’d built 160 rooms and 47 stairways — some of which you can check out when the place opens up for overnight stays. 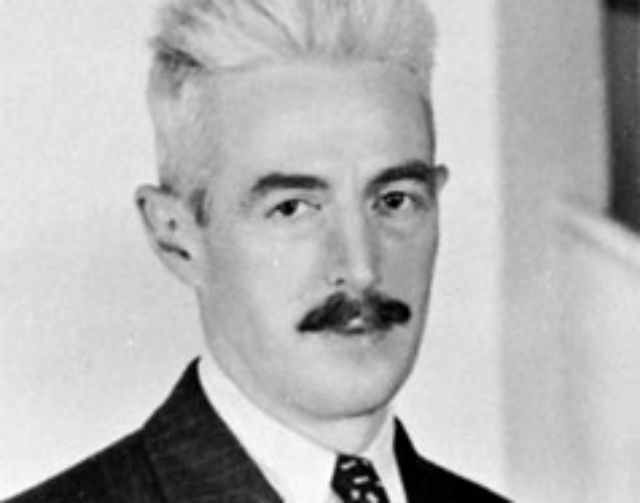 John’s Grill (Ellis @ Stockton)
For decades, it has been purported that ghost of “Maltese Falcon” author Dashiell Hammett himself still pops up at what was Dash’s favorite restaurant in San Francisco. Veteran waiter Chris Papaidannou told the SF Chronicle in the 80s that Hammett’s ghost regularly appears in the John’s Grill third floor dining area daily at 11 a.m., “as if he’s waiting to be seated for lunch”. 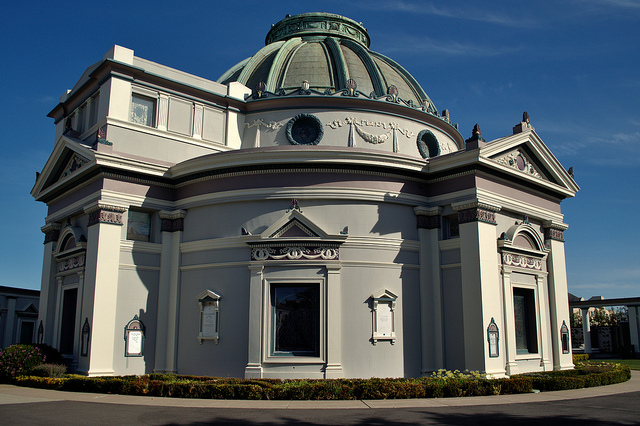 The Columbarium (Loraine Ct. @ Geary)
The very awesome Neptune Society Columbarium is home to many deceased San Franciscans’ ashes, including those of a young girl named Viola von Staden who died a year after the Great Quake of ‘06. In the years since, many a night watchman has reported seeing “Little Viola” wandering the Columbarium, sometimes making small talk and then disappearing.

Moss Beach Distillery (Moss Beach)
The charming little roadside restaurant down near Half Moon Bay offers brunch, seafood, cocktail specials and the recurring, horrifying apparition of a woman in a blue dress soaked in blood. According to Jeff Dwyer’s Ghost Hunter's Guide to the San Francisco Bay Area, she appears once or twice a year, blood-coated every time, running around Highway 1, dancing in empty rooms, or sitting atop the piano (she was supposedly stabbed by her jealous lover, the establishment’s piano player, in the early 1900s). 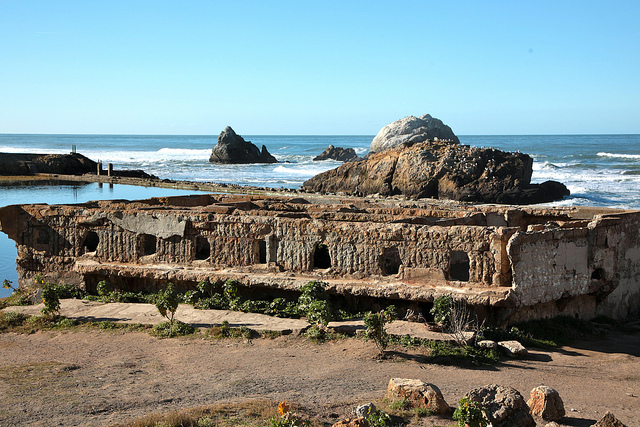 It is said that those abandoned ruins have all manner of ectoplasmic activity still occurring to this day. The most frequently retold story involves candles being thrown to the ocean, snatched from visitors or blown out. Says Anthony Anderson on the San Francisco Ghost Society webcast, “there are stories of a young woman who is believed to have drowned and that she was swept out to sea, and that her ghost actually comes back. Apparently when teens call her in the cave and they bring the candles, she’s supposed to come and either move it or put it out.”

Except when it’s not. According to a September 1961 article from the now-defunct San Francisco News-Call Bulletin, two policemen reported “a little gray-haired man who whistles softly as he flits through the echoing, cavernous old fun palace. He carries a flashlight. When [SFPD detective James] Clark went after him, the little man ‘just seemed to vanish’.”

For additional creepy value, the Richmond SF blog has this video of the Sutro Baths fire of 1966.

Writing in a paper called the Territorial Enterprise in 1866, a journalist you’ve perhaps heard of named Mark Twain noted the following:

“Disembodied spirits have been on the rampage now for more than a month past in the house of one Albert Krum, in Kearny street - so much so that the family find it impossible to keep a servant forty-eight hours. The moment a new and unsuspecting servant-maid gets fairly to bed and her light blown out, one of those dead and damned scalliwags takes her by the hair and just "hazes" her; grabs her by the waterfall and snakes her out of bed and bounces her on the floor two or three time; other disorderly corpses shy old boots at her head, and bootjacks, and brittle chamber furniture - washbowls, pitchers, hair-oil, teeth brushes, hoop-skirts - anything that comes handy those phantoms seize and hurl at Bridget, and pay no more attention to her howling than if it were music. The spirits tramp, tramp, tramp, about the house at dead of night, and when a light is struck the footsteps cease and the promenader is not visible, and just as soon as the light is out that dead man goes waltzing around again. They are a bloody lot.”

It should be noted that Twain often pulled patently false stories out of his ass just to make his article numbers. There is no public record of an Albert Krum living on Kearny Street in the 1860s.

Acknowledgement: This spooky shit was assembled with the help, clippings and ephemera of our good friends at the San Francisco Public Library’s SF History Center.

We've spent plenty of time providing you with Best Of lists that will probably make you fat. So now it's time to talk about the places you can go to feel healthy and

Google wants YOU to use the Internet so that it can serve you ads, which is how it makes money. There. That's the raison d'être for Google Fiber, the high-speed internet service the

—
The Seven Most Haunted Places In The Bay Area
Share this