A brand new Southern-style restaurant that has the added bonus of now serving Biergarten's much-drooled-over Wednesday night burger, is now open in the former 750 Cafe space at 750 Ellis, and it's called Rusty's Southern. As Eater reports, it's the brainchild of longtime Suppenkuche bar manager Rusty Olson, and Olson brought with him Biergarten chef Francis Rubio, he of the fantastic whiskey cheddar burger that the beer garden serves(ed?) only on Wednesday nights.

Only catch: Rubio's only making 12 of those burgers each night, at least for now, so it will likely sell out fast.

Also on the brief menu (see below), inspired by Olson's southern upbringing, there's Carolina-style pulled pork, a traditional Brunswick stew, a fry basket with shrimp and okra, cornmeal crusted catfish, and, of course, fried chicken. (We can't yet confirm whether it's good enough to warrant a place on our best-of list, but we'll let you know.)

Also, there's a well curated draft beer selection including the likes of Almanac and Goose Island, and they're doing weekend brunch. 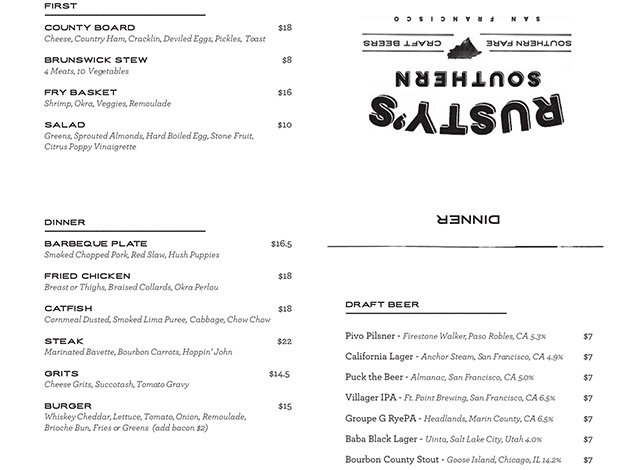 The fine folks at Porch House Pictures just sent in this video, shot in a single 12-hour span in sunny San Francisco, in which they "raced up hills and across the bay trying

According to a tip received by SFist, Haus, a coffee shop on 24th Street, was recently privy to an important and strongly worded warning. A "Yuppie Infestation" is just now sweeping the area,