Last night's Season 2 finale of Looking likely did not disappoint loyal fans of the show, and may have even impressed some late-arriving gay fans with its frank and genuinely realistic discussion of monogamy vs. semi-open relationship between two newly established boyfriends. But the big question still hanging out there is whether the show's cultural caché  and the fact that it's still being faithfully tracked and recapped in the gay press  and HBO's loyalty to the LGBT community will be enough to garner a third season, or whether the show's not-so-hot but steadily improved ratings will do it in.

The episode opens with Patrick appearing outside Kevin's new building  where a sign, at the real-life 8 Octavia, clearly says it's a for-sale condo despite the show saying it's a rental  arriving to "move in" with a single cardboard box labeled "valuables." Presumably the moving van is coming later, as Patrick committed to moving in with Kevin in last week's episode, despite them only being officially together for about a month. First thing in the door, Patrick is introduced to two of the other rumored gays in the building, an immediately annoying couple named Milo and Jake (one of the first words out of one of their mouths is "fabulous," or actually a pun on the key fob, "fob-ulous," so you know they can't be trusted).

There's a whole metaphorical thing that happens with Patrick not having a fob, not being able to operate the elevator, and getting repeatedly lost in the labyrinth of the building's halls, so you can feel pretty certain that this won't be home.

Inside the new apartment, which we now learn has its own roof garden, Kevin is making "welcome home" margaritas and slowly unpacking, and Patrick runs into red flag number one: a Field of Dreams poster. For some reason, British-born Kevin who one might not expect to love American baseball is really, really into Field of Dreams, and says it's the "best film ever made." I think I can speak for a lot of San Francisco gays in saying that this could easily be a dealbreaker on its own. But it's symbolic of the fact that they don't really know each other well and, as Patrick says, "I just realized I don't know your stuff." Yeah, yikes. 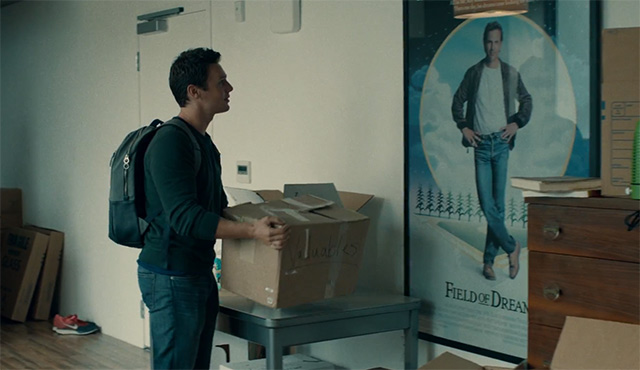 They then go to christen the new mattress, which is starting to sound like product placement for the Sleep Number Bed, and just as they're getting naked the doorbell rings. It's neighbors Milo and Jake inviting the newcomers to a Christmas cocktail thing they're doing later, which is where the central conflict of this fairly dramatic (for this show) episode will begin.

But first let's cover the season wrap-ups of the other two storylines, Augustin's and Dom's. First off, we see Dom show up at City Hall to bend Malik's ear about Doris refusing to talk to him  again, that whole fight made no real narrative sense, but sure, lots of longtime friends where one is straight and female and one is gay go through growing pains as they get older and get into relationships. The point is, these are mature adults who have known each other for over two decades, and you'd think they'd have worked this out by now. But Dom basically gets the go-ahead to have a face-to-face meeting with Doris, at which he also somewhat unrealistically suggests that they have to "break up," at least symbolically, so that Doris can move on and devote herself to another man. And this seems to mean that he has to refuse the offer of her dad's inheritance and somehow do the chicken window thing on his own, even though we learned last week that he was totally broke and maxed out his credit cards. Anyhow, they sit on top of Twin Peaks and hug, overlooking the SF skyline and the Bay Lights, and you know that they're basically going to be okay, even though it looks like Doris will be moving out of the apartment and into Malik's house. 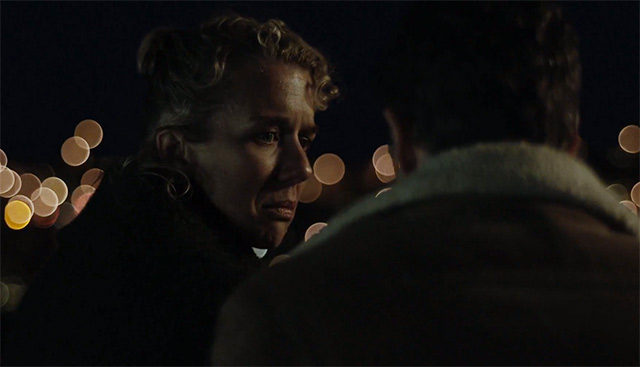 Someone please give Doris (Lauren Weedman) her own show.

Augustin is having a party for the unveiling of the mural at the trans kids' shelter with Eddie, and you see him and a Santa-costumed Eddie still very much in love, though Augustin makes a mention of a stomach ache and possible "PrEP side effects." He calls Patrick to see where he's at, because he and Kevin are supposed to be coming to the event, but their night gets a bit complicated.

Back to the Christmas cocktails with the downstairs neighbor gays. Patrick notes the party is "very white," and Kevin notes that there's also "not a single ugly person." They're quickly told to partake of the "lethal" bourbon punch and it's implied from several people they meet that these parties frequently devolve into some kind of sex thing  though, as Kevin probably correctly guesses when they pull each other aside, "It cannot be an orgy situation, not with this group of vanilla cupcakes. Everyone just must be making out or something." Then troublemakers Milo and Jake pull Patrick in on their Grindr game, as they try to figure out who's who in the room via the nearest profiles, and they come upon one within a few feet, no photo, with the name Romford  which happens to be Kevin's hometown. Patrick turns whiter than white, says, "We have to go," and they dart out of there.

Kevin admits he has a Grindr profile and was only using it to scope out what gays might be in the building. Patrick wants to be assured that he "didn't just move in with a sex addict," and Kevin assures him. But as the discussion goes on, Kevin cops to some mild cheating behavior while he was with John, besides when he cheated with Patrick, including "a little tug in the steam room at the gym" and the occasional massage with a happy ending  both things that a lot of gay men would find meaningless but which, obviously, freak Patrick out because he's been well established as a naive ninny. To Patrick's credit, he seems mostly concerned with the fact that John didn't know, and that Kevin wasn't honest about this with John. 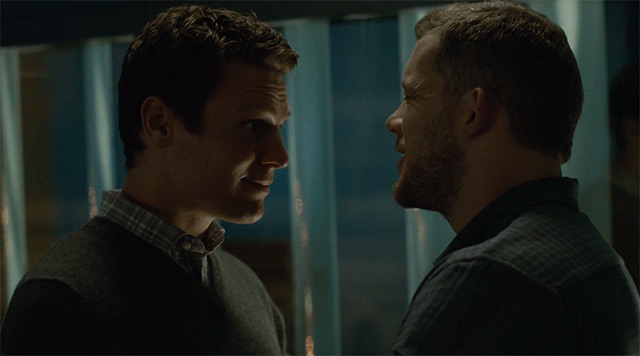 But then things take a turn for the freakier, for Patrick, when Kevin says, "I wasn't expecting to have this conversation tonight, but..." and he introduces the idea that maybe they should be open, at least when it comes to little tugs in the steam room. Because perfect monogamy isn't that realistic. This is a constant topic of conversation in the modern gay community, and increasingly in the straight world too because of Dan Savage, but obviously the boundaries have to be different for every couple, and nervous, naive Patrick never saw this coming. But he is admirably honest, and says that for him, maybe, ten years down the road he might be ready for that kind of openness, but in the meantime it's just going to make him insecure and make him wonder every time Kevin goes to the gym "go[es to] get a fucking bagel" if he's cheating on him. "Is it realistic or is it just an excuse to fuck around?" Patrick asks. And Kevin, rightly, points out that Patrick is no saint, invited him to come have sex in the woods in the season opener while he was still with his boyfriend ("I was single" is Patrick's excuse) and while Patrick was still with Richie he let Kevin fuck him on the floor of the office "without a condom."

Things seem resolved, or calmer, after Patrick has his requisite freakout and Kevin reminds him that he turned his entire life upside-down so that they could be together. Patrick uses the bed/mattress as a metaphor now, saying, "When it's made it [looks] fucking perfect, but underneath there are two different sides with two very different sleep numbers." He also seems sure, now, that his heart "works one way and [Kevin's] works another," but will that mean that they break up? And isn't Kevin's point that no, their "hearts" aren't fundamentally different, and Patrick's just too inexperienced to understand this yet.

By way of a cliffhanger, we get a few conflicting clues: 1) After Kevin assures him that he can make the choice to change, and be more strictly monogamous, we see them in bed together in the new apartment for the first time. Patrick gets up, unable to sleep, and goes to begin unpacking his single box after one last, long, regretful look at the Field of Dreams poster. 2) The next day, on one of the very rare rainy SF days of last fall before Looking wrapped before Thanksgiving, we see Patrick walking to Richie's barber shop in the Mission. He walks in, says he'd rather not talk about anything, and asks Richie to buzz all his hair off. New haircuts are, at least traditionally among women, symbolic of big life changes/new men.

So it's anybody's guess where the writers will take this if and when they get a new season. But if this turns out to be the swan song for Looking, I'll just say kudos to them for taking this monagam-ish discussion where it had to go for the first time in cable television history that at least I'm aware of. For all its faults, Looking has been a pioneering glimpse inside modern urban gay life  from a narrow, upper middle class, pretty white perspective, but nevertheless deeply relatable for a wide swath of gay men and mildly educational for everybody else. As others have said during the airing of the first season, I've never seen a portrayal of anyone this close to me on TV, and for others like me that's meant something  even if they should have taken more cues from more briskly written shows like Girls. If they get a third shot, one can only hope.

All previous recaps of Looking on SFist.

We learned last month that 40-year-old, kitschy, waterfront standby Sinbad's was headed for imminent closure, but at the time the restaurant's owners, the Stinson brothers, made some statements that suggested they weren't going