After a happy hour pitstop at Balboa Cafe and some pre-game beer pong at Bar None, me and my squad of the chillest bros in the Marina Ubered down to the Regency Ballroom to scope out the talent at the Mr. Marina Competition.

I gotta say, right behind Santacon and St. Fratrick's day, this is for sure one of the raddest events in the city. We weren't just supporting our boys in the running for the title: chillest dude in the district, the guy the bros wanna be and the ladies wanna be on. We were also raising money to kick Leukemia's ass. This year, with the leadership of host and organizer Brianna Haag, we totally hazed records from the past four years, collecting over $190,000 for a new high score and a total of $525,000 in the pageant's history.

But when we rolled up — lookin fresh in boat shoes and popped collars, that's how it's done— the line to get in was, like, around the block. Not cool, but no way did it suck because some of the hottest mamas in the city were right there with us. We're talking bodies by Equinox and heels by Prada, some serious swipe-right material. Yeah, I tried to score a couple numbers, but the vibe wasn't 100 percent there, so I was just putting in some groundwork, ya know? 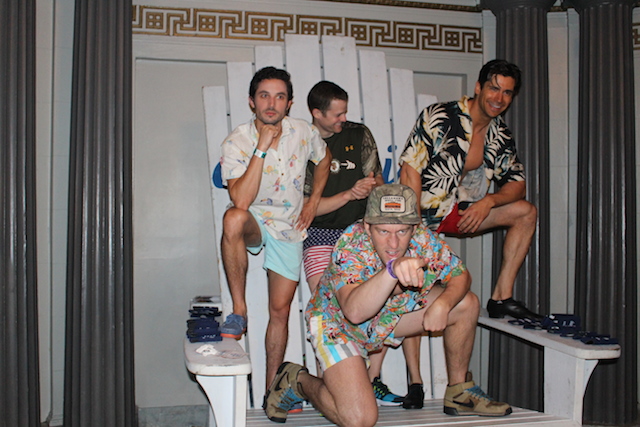 When we finally busted in the door, the Chubsters were already on the scene. I'm talkin bout the shorts dudes reppin the official swimwear for the competition: Chubbies. These thigh-liberating trunks and short-shorts are a total uniform on warm Fraturdays, and anyone sporting them last night was getting free beer (can't believe I wore khakis, but that's life, am I right?)

After scoring some drinks — there was a line, so duh we got two each and double fisted — we joined the crowd on the ballroom floor to take it all in. Some dude named Supervisor Mark Farrell was there as a judge — he seemed like a cool bro I guess — along with a super hot cheerleader and last year's Mr. Marina winner who's now broing out in Cambridge in grad school at Harvard.

To take the crown, I was pulling for my dude Mike Willis — aka the Wildcard. We ran into each other in the lobby, and he told me he's been working out in anticipation with Arnold Shwarzenegger's Blueprint For Mass, which is totally bad-ass and it shows. Sure, his good name was tarnished in the press after he and some other dudes threw down a little too hard at Frat Mason last weekend and left a couple solo cups on the ground, but he's a solid dude. 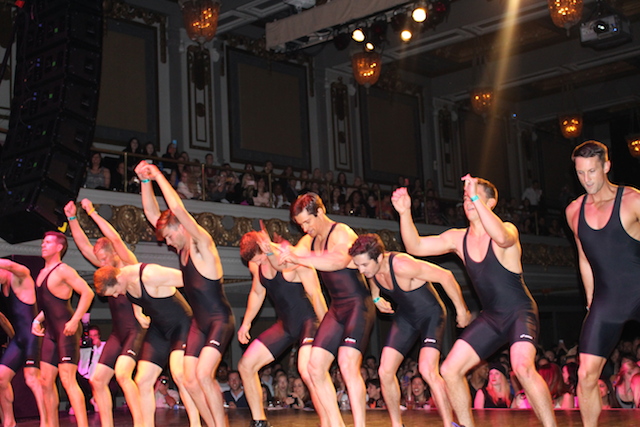 First up was a super rad group dance in singlets, which was like that movie Foxcatcher but, you know, not weird like that movie Foxcatcher. Then we heard the fundraising totals from each contestant, which contributes to their scores. These dudes raised some serious coin for the cause — like bonus-level totals — but Frankie Arias was the leader with over $30,000, so hats off and an early lead to him. 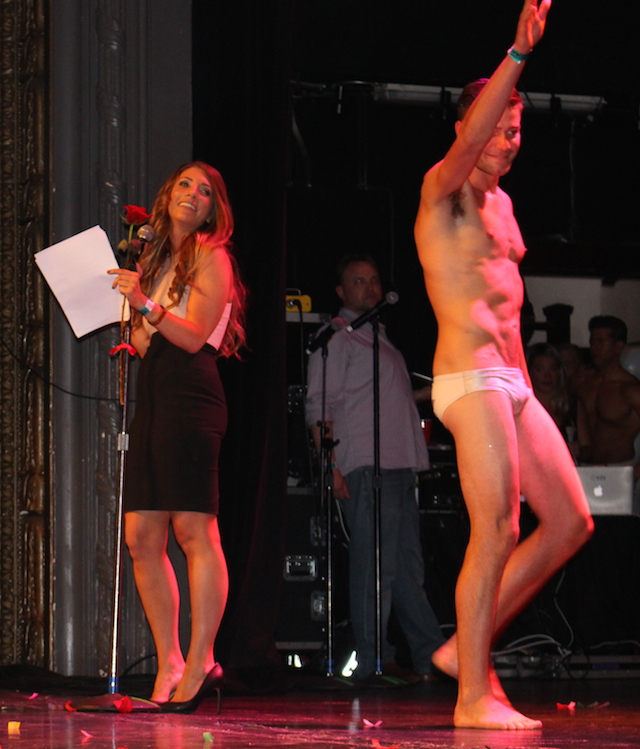 Next, we got right down to business with the swimsuit section. These dudes had some tight bodies, like objectively speaking, you know. I mean, chicks would have liked them, it was just okay for me. Each routine was rated by the judges — Mike killed it dressed as a mermaid, and we even saw some cool snorkeling gear from a few of the contenders. It was some Magic Mike stuff all around, with dudes dancing in Speedos at every turn, but you know, it's for charity, so I was like alright, dance guys, do it! 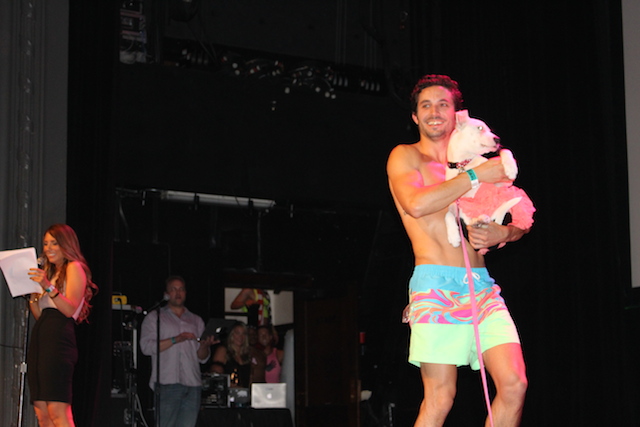 For talents, we saw a lot of hip shaking and partner dancing, and even a little drag, which was ballsy but like, whatever you're into I guess. The best routine? For sure the dude who just did a routine where he wakes up with one chick and then picks up another chick at a bar and brings her back to his place. That one totally slayed.

The question-and-answer portion belonged to Matt Bowers, who had a strong fan base. When asked onstage by Brianna what his ideal Marina girl was like, he just described Brianna, and then scored her number right there in front of everyone! So baller. 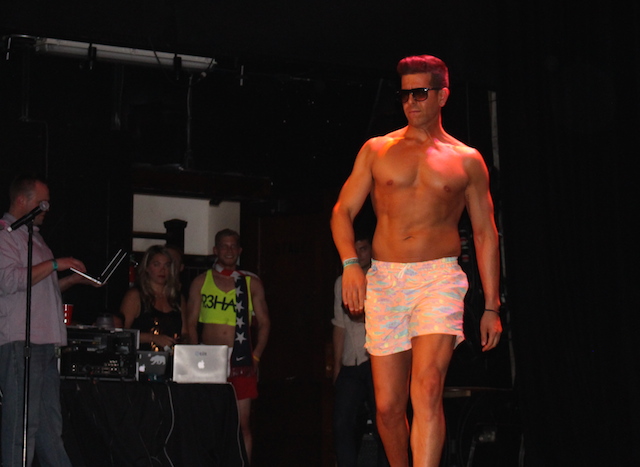 But there could only be one winner, with perks like his name engraved on a plaque at Monaghan's, Chubbies shorts for every season, a $250 bar tab at Lightning Tavern, and a whole lot more. In the end, third place went to surf bro Zac Sean, second place went to another crowd favorite, that Frankie Arias dude, and first place, and your Mr. Marina, was Michael Thomas. He seems like a super chill dude I'd be stoked to hang out with, and he dedicated his campaign to his mom, who's a lymphoma survivor.

To cap it off, all the bros did a group dude hug, and last year's winner said it best when he told the contestants "You'll all have a bond that goes way beyond this night." I don't know if he's referring to something weird that happened backstage, but I think he meant that we'd all remember the evening and the contestants like our actual brothers — you know, the kind you pledge with at fraternities.

Oh yeah, and getting back to the Marina was a breeze thanks to private bus service Chariot. They were cool enough to park super close even though it's technically a Muni stop or something. 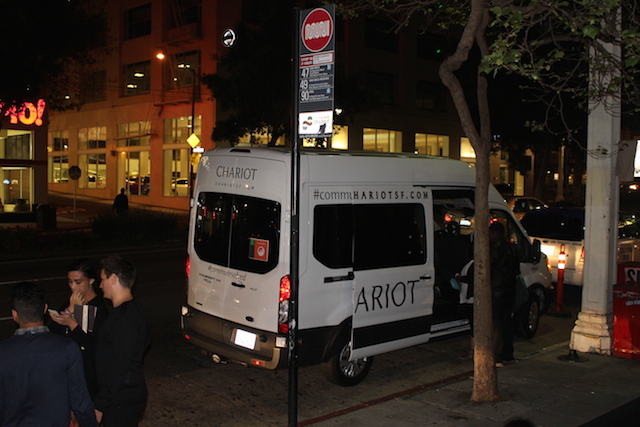 BART is planning some major track repair work on weekends starting April 5 that will shut down service completely between Coliseum and Fruitvale stations. This means a "bus bridge" will be necessary to

The story that broke earlier this week about the longtime tenant in a Bernal Heights rent-controlled unit has continued to churn, despite the fact that the tenant herself seems to have no legal

—
Bro-Down For The Dude Crown: Scenes From The Mr. Marina 2015 Competition
Share this