Yesterday, according to CBS 5 San Francisco District Attorney George Gascon filed 10 felony counts of vandalism and 19 misdemeanor counts of vandalism against suspected tagger Andrew Yarborough. Yarbrough has allegedly tagged at least this many sites all over the city and beyond with the words "Cryst" and "Sheep," educating a KTVU reporter that "Cryst means crystal meth and sheep means conformist gentrification and all that other shit." Yarbrough was arrested last week while photographing such graffiti on his phone in Dolores Park and carrying spray paint in a bag.

Today, SFist has noticed comments on our previous story from a person using the name "Cryst" and implying that he is responsible for the tagging and perhaps also that he is Yarbrough. SFist has reached out to the commenter and awaits a reply.

One commenter mocking the tagger's critics wrote that they were "Just a bunch of 40-something rich squares with nothing better to do than bitch about kids these days aka what San Francisco has become in the past 5 years." In response, Cryst jumped in.

Thank you that's how I feel!, but I bet nobody will do shit when they see me. I love how everyone is accusing me of praising and using meth lol the whole point of the tag was to create negative thoughts towards Crystal sorta like protesting it in a way. I'm several months clean from that shit thank the lord.

In reply to another, comment, this one the negative "Weak tag," Cryst replied:

Weak? It's not meant to be pretty or artsy its a fucking political tag.

A third commenter mocked Yarbrough's appearance in a video of him, to which Cryst responded "That hurts my feelings :( "

Though he could be joking, trolling, or anything at all, the comments could easily be believed as coming from Yarbrough himself. 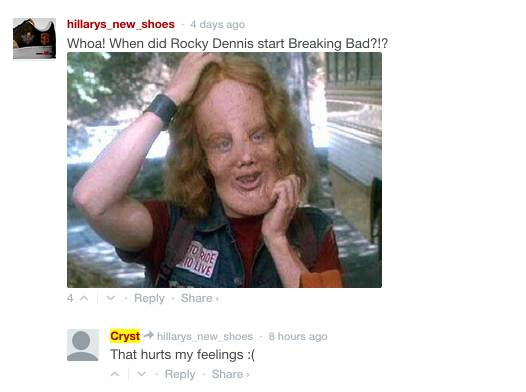 The commenter Cryst has an associated Google Plus page under Yarbrough's name, where in a March 12th public post he wrote:

"Don't worry about all these bitches talking shit most of them have never done graffiti and hate even the most professionals so if you worry about them you'll never make it. Graffiti is a game where you know your winning based on how many people despise you ;)﻿"

We'll update you if and when we get a response from the man who might be Yarbough.

More and more on the cheaper end of things on Craigslist I'm seeing listings like this one, and that last one, that are illegal dwelling units if anyone cared to enforce the law.

Calling recent rashes of bullying on social media "gender violence," actress Ashley Judd is pressing charges against multiple Twitter users who came after her in the wake of some comments she made about

—
Alleged 'Cryst' Tagger Faces 29 Counts Of Vandalism, Might Be Defending His Tags In SFist Comments
Share this