Cards Against Humanity — the profane person's Apples To Apples — is an already ubiquitous game in the Bay, readily found in dive bars or on back patios. If somehow you've never played, it's pretty simple: a fill-in-the-blank or question card is offered, and players submit a card from their hand to complete it or answer the question. And it's fun. Usually, winning submissions are politically incorrect, insensitive, or totally unintuitive. If you play, you know that the response "Hitler" wins a lot of hands.

Further, there's no shortage of expansion packs and variations out there, since the game gets stale when answers become repetitive. You can even download and print the game, all free and legal. The cheeky company behind Cards Against Humanity even landed some press for selling an actual bullshit version of the game at one point, boxes arriving last Black Friday chock-full of genuine bull feces.

But now, at long last, local gamesman Josh Barrientes wants to give the Bay Area the Cards Against Humanity version it so clearly deserves, as Live105 reports. Here's hoping he's got some good cards in his hand, since it could be super funny if done well. Unfortunately for the project, but really quite naturally, Kickstarter does have some copyright policies and such. Perhaps this one will fly under the radar, or could be seen as parody....which is doubtful, so we'll have to see. 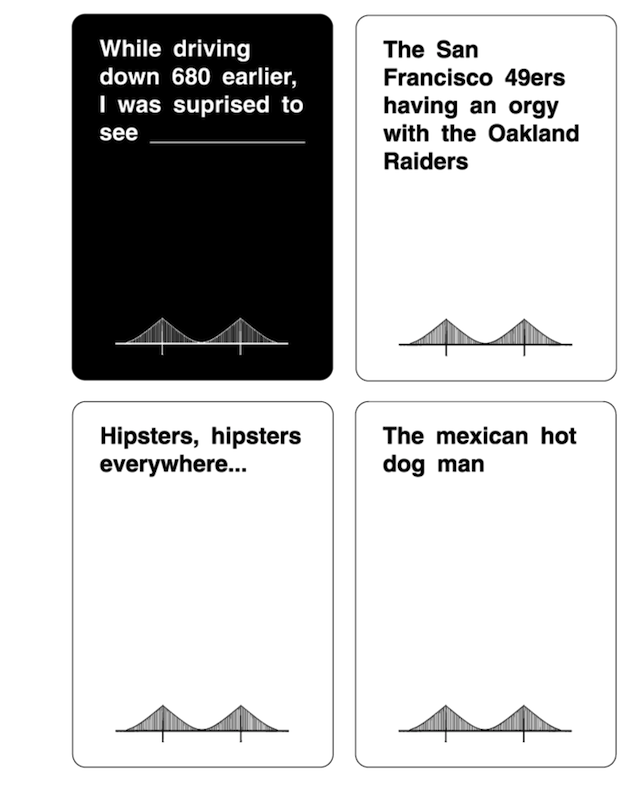 Cards Against the Bay via Kickstarter

For those who felt a pang of jealousy that local chef legend Jeremiah Tower had decided to make a comeback in the kitchen at age 72 in New York, at the also legendary

"Belgian brasserie" is the newly announced concept for the Cafe Des Amis space (2000 Union Street at Buchanan), which we learned in January was coming under the ownership of Adriano Paganini. Paganini is

—
Yes!: Help Kickstart This Bay Area Version Of Cards Against Humanity
Share this