The price tag on those greener pastures east of San Francisco has been getting a serious markup. According to a report from local real estate site Trulia, rents in Oakland have increased 12.1 percent in the last year, outpacing even than those in San Francisco and topped only by those of Denver. Naturally, San Francisco was number three on the rent-rise ladder at 11.6 percent.

The change, says Trulia, is tied to a 2.7 percent rise in Oakland's employment. By contrast, employment increased 4.5 percent in San Francisco. Of course, those numbers are related as folks commute one way or the other. "This is big news," the report announces. "For much of the recovery, the rebound effect was more closely tied to local price gains than job growth was But today, things have reversed: Job growth is now much more important than the rebound effect... Nationwide, rents rose 6.5% year-over-year in January. The three large rental markets with the steepest rent increases - Denver, Oakland, and San Francisco - all have had job growth of 2% or more." 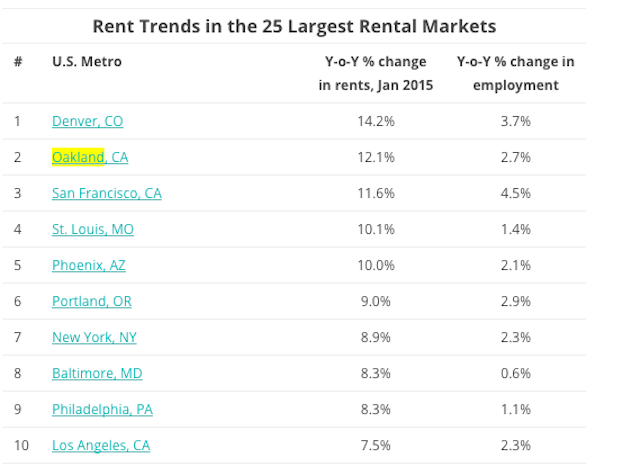 SF still holds the dubious honor of the nation's highest rent, as medan one-bedrooms hit a record high of $3,410 last month in another report. The report, which tied job growth to rent increases, noted that asking prices of Oakland homes for sale are also soaring, up 13.7 percent year-over-year.

Following SF, St. Louis was number four on the rent-increase list, with Phoenix and Portland up next in that order. So, Oakland: welcome to San Francisco.

Previously: New Map Shows How Expensive It Is To Rent An Apartment Near BART

First it was drag queens, and now Native Americans have been the target of a Facebook crackdown over "fake" names, which actually are not fake. And it looks like this dates to around

With the departures of Joseph Schmidt and Scharffen Berger, chocolatiers who each had local operations before buyouts from Hershey's, the Bay Area's status as a sweet-toothed capital was in question. Not for long,

—
Oakland Rents Are The Second-Fastest Growing In America
Share this