A new restaurant that's been three years in the making is finally making its debut in the Mission this week, and that's former Ubuntu chef Aaron London's solo effort, AL's Place (1499 Valencia Street). It's another in a string of significant openings to hit early in the year, including the new restaurants from Ravi Kapur and Mourad Lahlou, and Friday, February 6 is the big day.

As we learned back in the fall, London took over the former South End Grill 'n' Bar space at Valencia and 26th, and now we can reveal photos of bright, clean interior, much of which London designed himself with the help of his community of friends.

Sidebar: This is the second bit of news this week about an Ubuntu alum making a fresh start in SF, the other being Kim Alter's upcoming Hayes Valley spot. And, some may recognize London from his two years behind the bar at Locanda, just down the street from his new spot.

The menu, which you can see below, draws on the passion for vegetables that London showed in his James Beard Award-nominated work at Ubuntu, but now with just a bit of meat and fish thrown in. The gimmick, if you will, is that London is making the meat dishes into "sides," still letting vegetables and fish be the stars of the show, but letting people order a bavette steak or bit of foie gras on the side. As he told Inside Scoop, "I took it to the way I like to eat the most. It’s my little restaurant, so I’ll do that. I love meat. I just don’t like to eat it everyday or all dinner-long." And I can say right now that the sunchoke curry with black lime and cod sounds damn delightful.

The restaurant only has 45 seats  the chairs, if you're into chairs, are all Jean Prouvé replicas. And for now it will be open Wednesday to Sunday, for dinner only. Get reservations here. 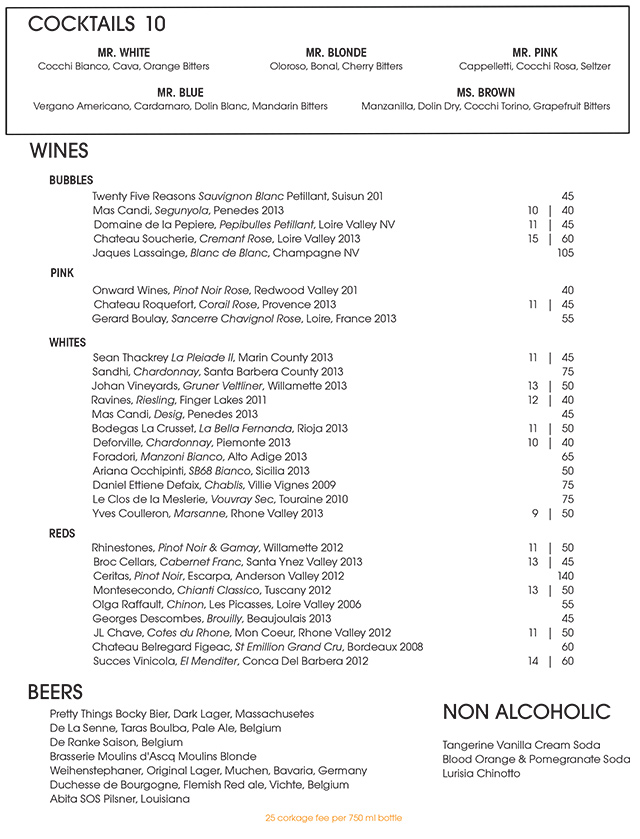 According to the website for Playland, the Polk Street bar will be closed for a "remodel" until March 3rd. But the Chronicle is implying that's some coded language, and maybe not the first