At least 40 people were displaced in Wednesday night's big fire at 22nd and Mission, including several Latino families, and reports are emerging that no fire alarms sounded and fire escapes were either blocked or locked. As Fire Department spokesperson Mindy Talmadge tells the Chronicle, "It’s unusual for a fire at that time of day to have so many people trapped."

One man was killed and six injured, with injuries including burns and smoke inhalation, in the blaze that began around 6:45 p.m. in the three-story building. Firefighters say it was "a very difficult fire," in part because it traveled the entire length and width of the building via an attic space, and it took hours to contain. As KTVU reports, once it looked like the roof might collapse, about 50 firefighters had to "retreat and pull out of the building, switching to defensive mode." One firefighter was injured.

Also, ABC 7 reports that a lone, stalwart chihuahua was found alive inside the burned building this morning.

The exact cause of the fire is not yet known, but there's some indication it may have started on an upper floor.

A relief fund for victims has begun, and is over halfway to its modest goal of $10,000.

Below, more pictures of the blaze, and the building as of this morning. It has been red-tagged. 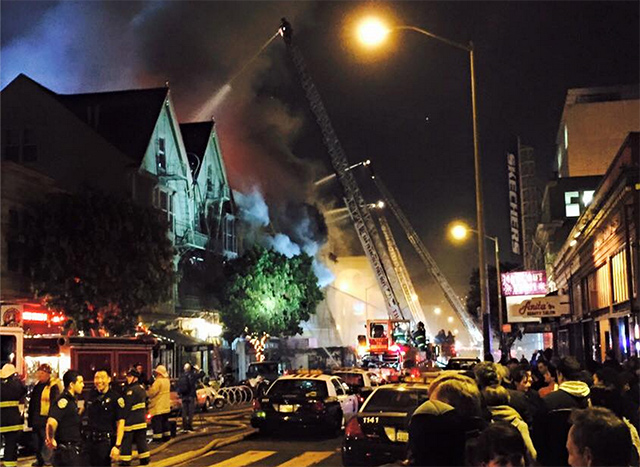 There's a pretty intense fire by my house right now...

This bldg in SF's Mission has been red tagged. About to open Mission St - but will keep lane next to bldg closed. pic.twitter.com/V0IEqRSIdq

Urban Putt — the Mission's intricate indoor mini-golf course complete with a bar and restaurant that opened last year — has a new trick up its sleeve. This installation by Dan Rosenfeld called Sleepwalkers is