Aisha Rosen and her office, AE7QA, may have found your lost bird, which she suspects is a female white zebra finch. According to Rosen and her officemates who found it, the fowl was noticeably out of its element in the wild, leading them to grab it and care for it.

Rosen caught the attention of Redditors with her very cute drawing, and SFist contacted her to find out more and give her a signal boost. As it turns out, Rosen loves to draw, and birds are her favorite. "Any and all opportunities to draw animals are taken," she says.

Rosen wrote in an email that: "Our office manager, Lara found the finch and showed it to me. I picked it up and put it in a little box and fed it crushed up Triscuits (the only thing I had that I thought might be ok as temporary food. One of my bosses, Ed, took it home that night (and named it Triscuit). He bought it seeds, gravel and made a really nice cage for it. He brought it back Friday and I made the signs. He, Lara and I stayed late after work to walk around the park and put up the posters. All three of us have cats so we couldn’t keep her over the weekend. My other boss Cecilia took Triscuit home and her 16-year-old daughter is taking very good care of Triscuit. If we don’t find the owner soon, either Cecilia’s family will keep it, we’ll bring it back into the office and have an office bird (but we would need to get another because we don’t want her to be lonely) or we will give it to another employee’s friend who rescues animals."

Here's a picture, in case you've got any leads or the ornithology chops to confirm the species. 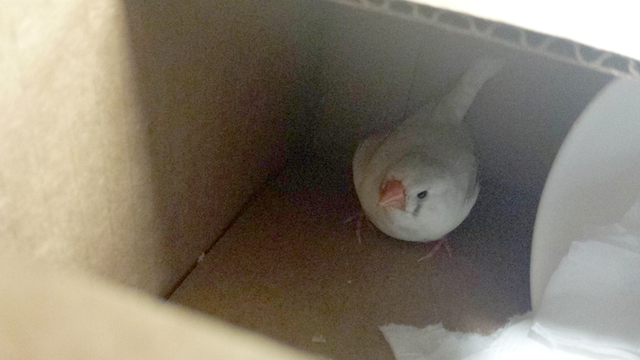 It's been a disappointing month for vegans after the announcement of the closure of their beloved Millennium, not to mention Source. But now there's a bit of good news: Weird Fish, the vegan-friendly

This video, shot by some guys in a Cessna in 4K (better than HD), shows some dramatic top-down views of the city on a clear day. Santa Rosa-based pilot and videographer Andrew Leonard,

—
Did You Lose Your Pet Finch? This Office Is Taking Care Of It.
Share this