Though it's been eight years since 20-year-old Alberto Casillas was shot to death while driving in SoMa, the San Francisco Police Department hasn't given up on trying to catch his killers. On the anniversary of his slaying, police are reminding everyone that his shooters remain on the loose, and that a $250,000 reward still stands for anyone who leads cops to the people responsible.

Witnesses told police that the shooters were black men between 18 and 25 years old, at least one of whom had apparently brandished a gun at Casillas earlier that night at the Caliente Club, a since-closed bar located at 11th and Folsom Streets.

Police say that one shooter is a large man with a dark complexion standing 6 feet 4 inches tall and weighing over 200 pounds. He was wearing a long black jacket and a black T-shirt with a white square on the chest area at the time of the crime.

The other man was described as standing 5 feet 8 inches tall and weighing 160 pounds, with short hair with a prominent widow's peak. He was wearing a dark T-shirt the morning of the shooting.

Here's an SFPD sketch of both: 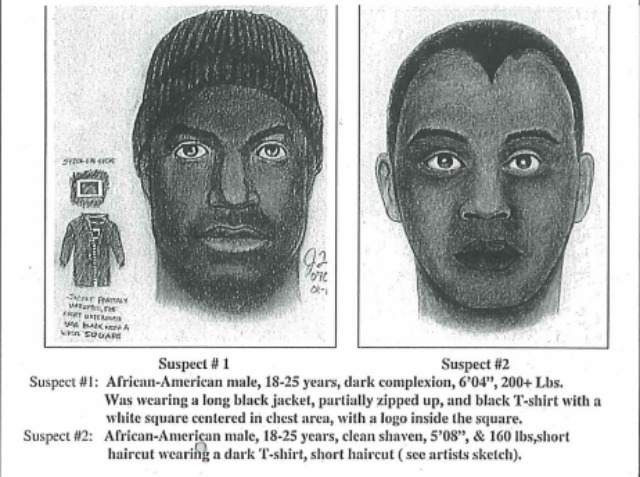 Police say that they were driving a silver car, perhaps a Honda Civic or a Nissan Maxima, with a low spoiler on the back and a partial license plate of 166.

For several years since the slaying, police have reminded San Franciscans that there is a $250,000 reward for information leading to the apprehension of Casillas' killers, but thus far, it remains unclaimed.

Perhaps this will be the year this crime is solved? One can always hope. This year, SFPD says that the person to contact with any with information about the case is Gianrico Pierucci of the San Francisco Police Homicide Detail, at (415) 553-1145. There's also an anonymous tip line, for those willing to forego the $250K, at (415) 575-4444.

Sketch of suspects in the slaying of Alberto Casillas: SFPD

The media powerhouse that is BuzzFeed  a.k.a. the breaking news, humor, quiz, and GIF-listicle engine that began monopolizing your Facebook feed in the last three years  has just opened a San

You may not have realized that San Francisco is home to a sizable community of French ex-pats, and the tragic events in Paris yesterday have obviously rippled across their ranks. Hundreds gathered Wednesday

—
Eight-Year-Old Murder Remains Unsolved, Despite $250,000 Bounty For Shooter
Share this