The American Tiki bar wasn't exactly born in the Bay Area, but it almost was  the iconic Trader Vic's opened in Oakland in 1936, just three short years after the first Tiki bar, Don the Beachcomber's, opened in LA. And after World War II when thousands of US soldiers got a taste of the culture, and cocktails, of the Pacific islands, the trend blew up all over the country, with palm-strewn bars far and wide modeled after Trader Vic's and SF's own Tonga Room & Hurricane Bar, designed by an MGM set designer and first opened in 1945. We only have a handful of honest-to-god Tiki bars left in the Bay Area, and while the Tonga Room is going strong I can't vouch for all the drinks on the menu, which tend to skew toward the overly sweet. What we have for Tiki bars are pretty great, including the nationally acclaimed Smuggler's Cove, but today we also wanted to point you to bars that aren't all Tiki, but still mix some mean daiquiris and pina coladas.


The Tonga Room
This ultra-kitschy, thoroughly intact, OG Tiki bar with an actual lagoon in the middle of it is so beloved in San Francisco that people have lost their minds over threats of it closing at least three times in the last ten years. After years of slipping into mediocrity with a sickly sweet drink list with atrocities like the Blue Hawaiian on it, the cocktails got a bit of a modern makeover in 2013 with the help of fresh juices and less sour mix. And they now make a real pina colada, with blackstrap molasses, rum, pineapple, and coconut cream, though some of the drinks are going to skew to the sweet side and I can't really recommend the Scorpion Bowl unless you're a 21-year-old girl. Still, this place is awesome for a second date, and if you haven't been, the tropical rainstorms that happen every 20 minutes need to be seen to be believed. Jay Barmann
California Street between Mason and Powell 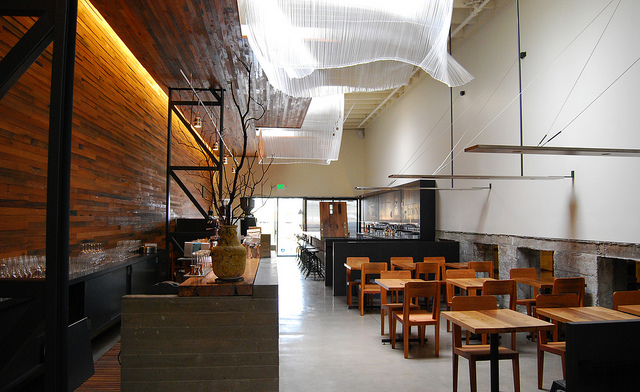 Bar Agricole
This place is about as far from "Tiki" as you're going to get, aesthetically, but nonetheless its very name comes from a type of Caribbean rum, and pretty much every drink you order here will be a winner. Special props in the tropical/Tiki realm go to their amazing 'Ti Punch (a simple concoction with agricole rum, lime, and sugar), the iconic and better-than-you'll-have-anywhere-else Planter's Punch, and their perfect Daiquiri Deluxe. Jay Barmann
355 11th Street near Harrison 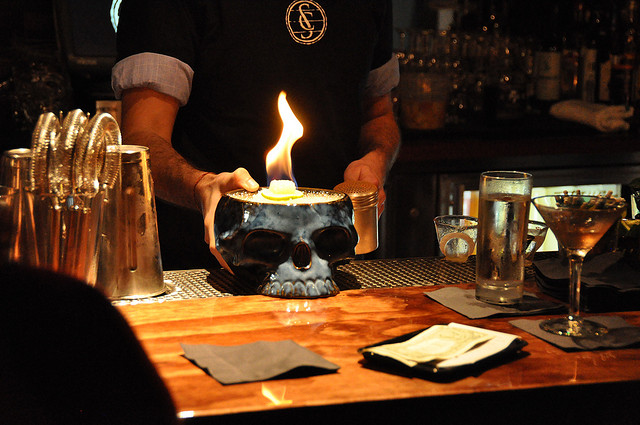 A Volcano Bowl at Smuggler's Cove: Kellnan via Flickr

Smuggler's Cove
Smuggler's Cove is the unironcally over-decorated Hayes Valley Tiki bar that's only "hidden" if you don't count the conspicuous lines at the unlabeled door or the constant plaudits. It harbors over 70 cocktails, 200 rums, and yes, a small lagoon. The secret to the drinks is also no secret, it's fresh juices squeezed in-house, and serious mixology skill. Smuggler's Cove has enough collectors' items to fill a Tiki museum and is as much kitsch shrine as it is cozy watering hole. It's no wonder, then, that members of the bar's not-so-secret society receive a shriner-inspired fez. Owner Martin Cate has what must amount to a PhD in rum at this point, and the bar's book-length drinks list is a history of the spirit told through cocktail recipes, with classics recreated and probably improved. — Caleb Pershan
650 Gough between McAllister and Ash Streets. 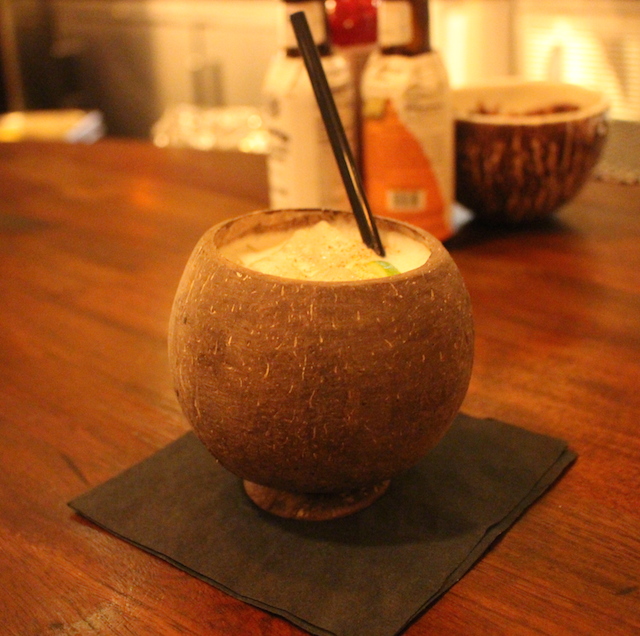 Palm House
If Tiki is the romantic conflation of many island cultures, then Palm House is definitely a Tiki joint. Here, the drinks menu island-hops from mojitos to piña coladas to something just called a slushy. Get the piña colada. I would be remiss to exclude the fact that Palm House has an excellent palm tree right in the middle of the front deck. — Caleb Pershan
2032 Union St. between Webster and Buchanan Streets 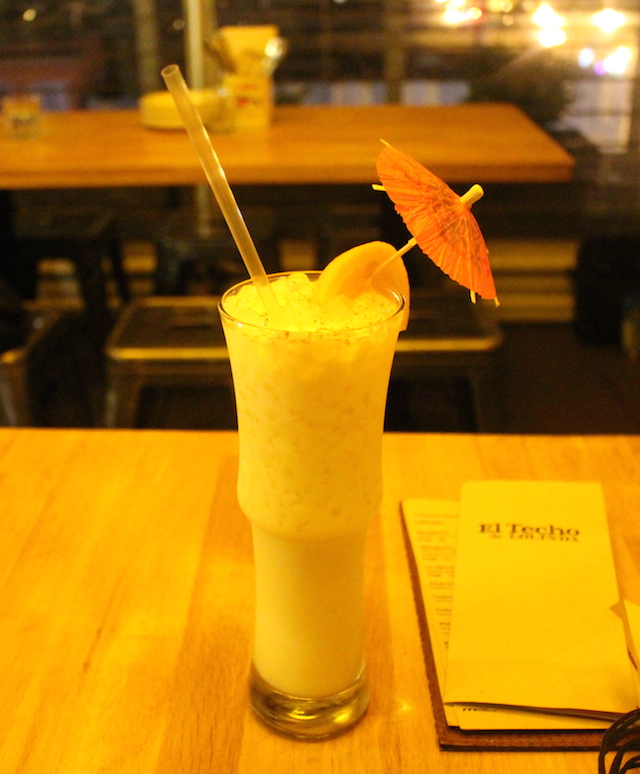 El Techo de Lolinda
The piña colada at El Techo de Lolinda is made with a house rum blend, coconut cream, pineapple, cinnamon, and perfectly crushed ice. And how is their take on this classic Puerto Rican drink? It is excellent. Of course, it doesn't hurt that the creamy, citrusy concoction is consumed on a ROOFTOP, a San Francisco rarity. Order some snacks from the solid Latin American menu, too. — Caleb Pershan
2518 Mission St. between 21 and 22nd Streets. 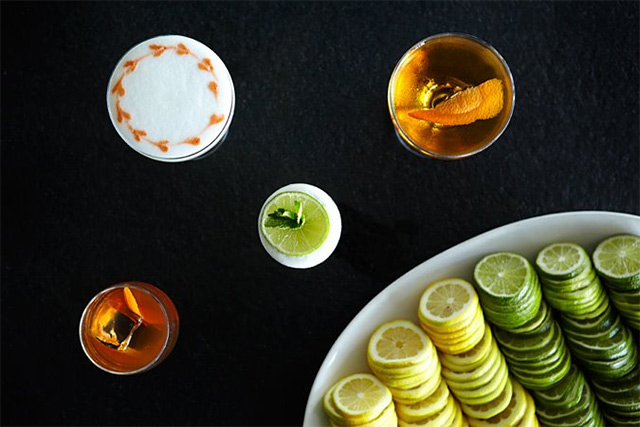 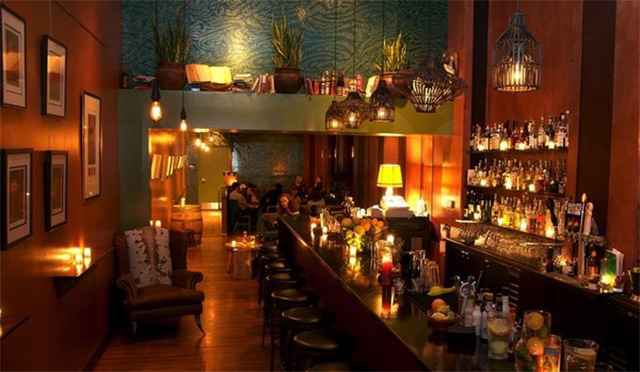 Forbidden Island
Forbidden Island isn't one of those places that tosses an umbrella in your drink and calls it a Tiki day — instead, a head-to-toe remodel in 2006 of Alameda dive bar Lincoln's Address transformed the space into a no-holds-barred Polynesian extravaganza. But this place has more than good looks, as the owners focus on locally made wines, beers, and spirits, squeeze all their own juice daily, and make all their syrups and grenadine in-house with pure cane sugar. There's even a small menu of fried foods to stave off the worst of your hangover. Speaking of hangovers, if it's your birthday, you get a free flaming Mai Tai. Because things aren't truly Tiki until someone gets torched.  Eve Batey
1304 Lincoln Avenue in Alameda 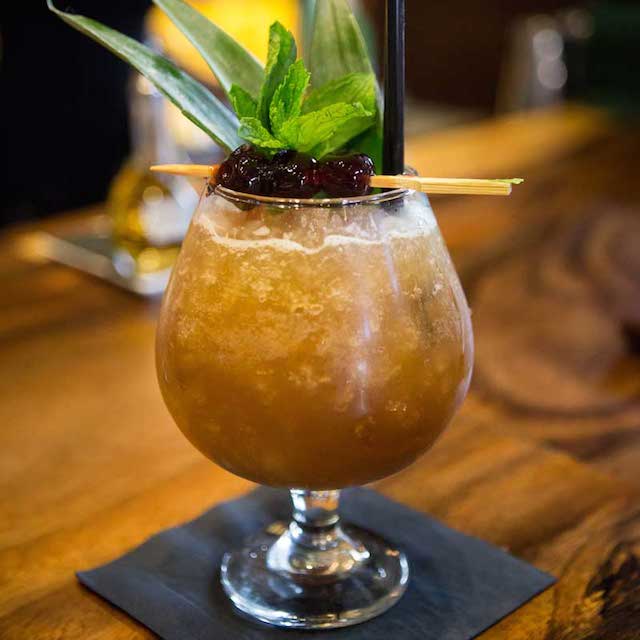 Longitude (Oakland)
From Forbidden Island alum Suzanne Long, Longitude is the self-aware downtown Oakland take on Tiki. The drinks are timeless but up to date, like this Peter Love Grog, with two types of aged rum, lime, cinnamon, cardamom, vanilla, and house-made maraschino cherries. The decor is a big update... besides the bamboo hut. Also can't beat their happy hour Tuesday to Friday from 4 till 7 p.m., with excellent cocktails just $6. Expect the kitschy throwback food your were expecting, like pu pu platters and crab rangoons, and feel free to have a go at their society, in the same vein as Smuggler's Cove's before it, and Forbidden Island's before that.— Caleb Pershan
347 14th St between Webster and Harrison Streets. 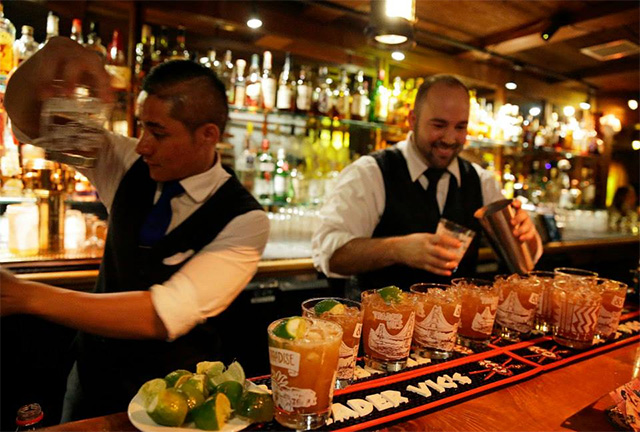 Trader Vic's
To see the awesome, vintage, once-upon-a-time home of SF's Trader Vic's, you'll need to go to Le Colonial, where I don't recommend ordering anything except a gin and tonic or vodka soda. But currently, the Trader Vic's chain still has a location in Emeryville, on the water, which is some vague fourth-generation simulacrum of the original bar that started it all, and is perhaps notable just to see the historic documentation they have on the walls (which can also be seen at Smuggler's Cove). The interior got a remodel a few years back, and they do serve a decent Mai Tai in classic classic glassware over crushed ice, so there's that. You go here in between Bay Street and IKEA shopping to order one of those, just to say you did. Jay Barmann
9 Anchor Drive, Emeryville 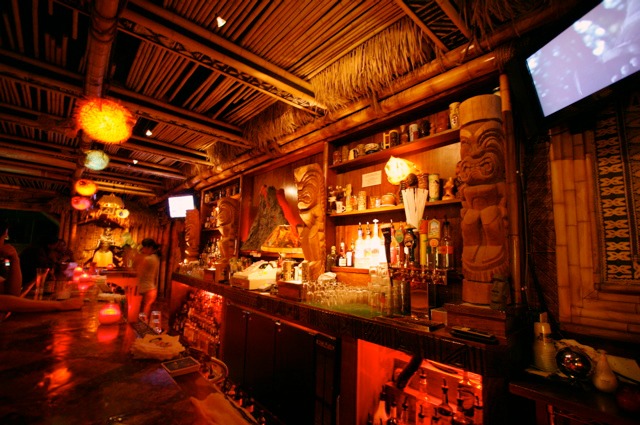 The dark and cozy Kona Club. Photo from their website.

Kona Club
When Kona Club owner Doug Miller learned that Oakland bar Kings X was available for sale in 2005, it seemed like fate. Located just steps from Mountain View Cemetery, where (among many other notables) Tiki god Victor Jules "Trader Vic" Bergeron, Jr lies in rest, the spot semed like an ideal place to revamp in layers of bamboo, tapa, and hand-carved tiki. Regulars swear by their Macadamia Nut Chi Chi, a blended drink that's so delicious that you'll forget to be embarrassed about saying the words "Macadamia Nut Chi Chi" and drinking a blended drink. Weekends can get pretty packed, so if you want a seat a week night is your best Kona Club bet — and if you have to call in sick the next day, that's all part of your new island lifestyle.  Eve Batey
4401 Piedmont Avenue in Oakland Photo: Jennifer Yin

Looks like the Olympic committee is taking a red eye. They said they'd fly from the site of the decision, which was in Denver, to the city with the winning bid. That's Boston,

Put down your graphing calculator and compass and pick up your calendar. These are the six days that the one-of-a-kind Exploratorium at Pier 15 is absolutely, positively free. If you were a science