Earlier in the year, local drag star Heklina announced that she would be retiring the name "Trannyshack" after careful consideration, and after getting significant flack from a younger generation of fans. As she told SFist in May, "When I started the club [in the mid-1990s], the word 'tranny' was not seen as a hurtful thing; today, it is." She said she would be considering new names for her popular party  which now has satellite events in Seattle, Portland, L.A., and Honolulu  among them "T-shack," but that she wouldn't make a decision until the new year. Then in October, Heklina and three partners (fellow drag queen D'Arcy Drollinger, Geoff Benjamin, and Jason Beebout) inked a deal to buy the former Oasis nightclub, more recently known as Club Caliente, at the northwest corner of 11th and Folsom, and they decided to rechristen it The Oasis.

Now the club is set to have its grand opening on New Year's Eve, after a hefty renovation by David Marks Design, and there's a big party planned that night.

And then, on Saturday, January 17, Heklina will be premiering the new weekly incarnation of Trannyshack, which henceforth shall be known as Mother.

She spoke to SFist to explain the name, and tell us what to expect at the new club.

SFist: How did you settle on this new name, Mother? You had mentioned a possible “focus group" earlier

Heklina: In the end, I decided it had to be something less clinical or thought out than a focus group. It had to be something I liked, that I thought of. I did bounce it off a few people of course. And, it must be said, I am very aware that there was a legendary club called Mother in New York back in the 90's. I approached the promoters (Chi Chi Valenti and Johnny Dynell, of Jackie 60 fame) about using the name, and they gave me their blessing. That was something I was super careful about, since I have had to sue many people over the years for ripping off the Trannyshack name. I didn't want to be accused of the same thing!

What does the name mean to you?

It has several meanings; the new "Mothership" of drag in SF, something warm and comforting, nurturing even. And it also ties into the "drag mother" thing. This will be a place for all drag mothers to bring their children, to hone their craft.

What can people expect from the party that might be different from/the same as Trannyshack?

I had lots of ideas for how to make it different but, ultimately, I decided if it's not broke don't fix it. It will be a cross between the Trannyshack back from the STUD days, and what Trannyshack became at DNA Lounge. In other words, it will go back to being a rock and roll drag show with more crazy themes (themes we couldn't do at DNA), but it will be much better produced than the punk rock days at the STUD. Also, it will be different in that it will be on a Saturday!

Tell me about what’s gone into the renovations at Oasis — any pics to share?

The entire place has had to be redone! It was a hot mess when we got the keys. Sorry, no pics, you'll have to see for yourselves...

What are your memories of the original space?

I went there maybe a handful of times, back in the early 90's. I definitely remember dancing on plexiglass over the pool. Everyone keeps asking so I may as well put it out there, the pool is ancient history. The last owners filled it in, plus there is NO way you could get away with having a pool in a nightclub in SF these days.

What else will be filling out the calendar at the new club?

We are already booking clubs, theater, you name it. Check out our new website to stay up on all the new events! It's a work in progress at the moment, but that will be our portal. 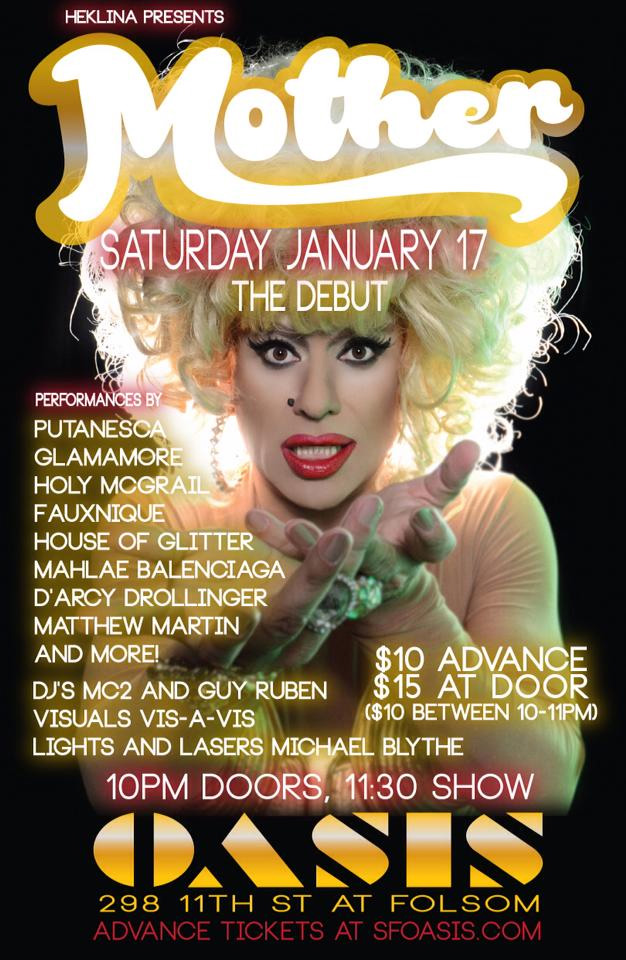 The Oasis opens on December 31 at 298 11th Street, and you can get tickets for the opening party here. Mother begins on January 17, and tickets for that are here. Also look out for the return of D'Arcy Drollinger's theatrical event Shit & Champagne, on January 8.

We've still got two weeks of 2014 left yet so, who knows, maybe there are more $8.6 million home sales in the works in San Francisco? But according to SF Gate, this

An 18-year-old man continues to fight for his life Tuesday after an early-morning shooting at Coit Tower. Bay City News reports via CBS5 that the victim, who hasn't been identified, flagged down a

—
Exclusive: Heklina Talks About Mother, The New Incarnation Of Trannyshack At The Oasis
Share this