Today's predicted, panic-inducing rain disaster is becoming a bit more disastrous now in its first few hours. As reported already, Montgomery BART Station had to shut down due to a power outage, which caused a fair bit of commute trouble. And there are photos streaming in of flooding all over the Bay Area, including many parts of SF. 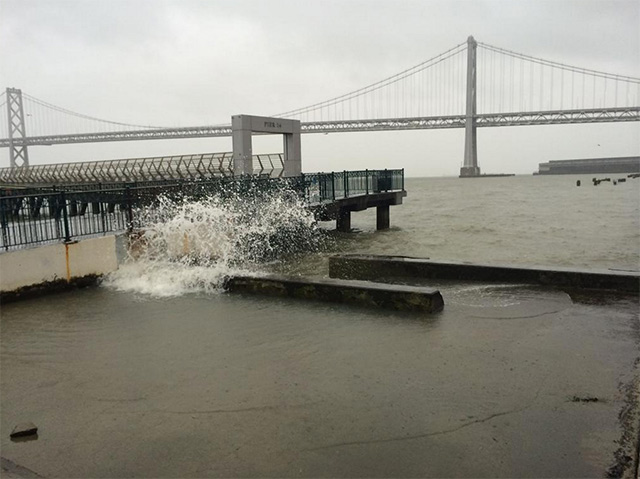 The Embarcadero was also closed this morning from AT&T Park to Pier 39 because water started cresting the seawall, as KGO reports  and high tide isn't coming until about 2 p.m. It reopened at 9:15.

Elsewhere, it looks like flooding is already heavy in the San Bruno area, and the photo below, tweeted out by this guy, shows serious flooding on the 280 freeway that commuters were nonetheless trying to ford with their cars.

PG&E and NBC Bay Area are reporting between 80,000 and 100,000 customers in San Francisco lost power due a blown substation at Civic Center. That outage appears to be affecting parts of downtown, North Beach, Russian Hill, the Marina and Pacific Heights. As of 12:28 p.m., that number had been reduced to 75,000 powerless San Francisco households, the Chron reports, but new outages appear to be popping up, with a new outage reported in Union Square at 1:50 that's left the area dark and businesses closed. You can see PG&E's real time outage map here, or see a glimpse below. Red = bad.

Flooding is also being reported at Geary and Fillmore, and at Third Avenue and Lake Street.

There's a flash flood warning in effect for pretty much the entire Bay Area until 9:30 a.m., and as CBS 5 reports, at least four local rivers were expected to top their banks today or tomorrow: the Napa, Russian, Navarro, and Sacramento Rivers. The worst flooding could be seen along the Russian River which is predicted to rise as much as 32 feet, flooding places like like Rio Nido Village, parts of River Road, and Mirable Park.

The storm has of course affected air travel, with long delays and cancellations at SFO, as the Chron reports. As of 12:30, 240 flights had been canceled at SFO, and passengers were confronted with delays from 60-90 minutes.

Between the power outages and the generally shitty weather, lots of places are closed today, including Alcatraz Island, which was shut down by the National Park Service"due to heavy rain, high winds, and hazardous surf conditions," KRON4 reports.

But the worst might almost be over, National Weather Service forecaster Diana Henderson told the Ex. “We’re still going to get rain for the good portion of the afternoon, maybe even this evening,...the worst part of it is over, but the system itself is not over by any means.”

And you know what that means...school's back in session tomorrow, kids.

Plan on all #SFUSD schools and offices being open tomorrow, Dec. 12. If anything changes, we'll let you know. @SFUSD_Supe

time for google to bring that barge idea back RT @retardra: @spweather seen on Cesar Chavez in SF pic.twitter.com/Mte0IJ3NDL— Roberto Baldwin (@strngwys) December 11, 2014 Hey, did you hear? It's

SF is where "indie classical" folks will convene for the first ever New Music Gathering this January. [New York Times] Get ready for your hot-selfie-taking-Russian-girl Instagram follower count to drop, as the social