San Francisco remains a stellar drinking town. And after helping lead the charge in the last decade  alongside our brethren in New York  in the cocktail renaissance, our bar scene is settling into a confident stride in which balance, quality ingredients, and good taste often trump showiness or innovation. That said there are still plenty of bartenders doing innovative stuff, and carrying on the established Bay Area tradition of looking to the farmers' market before creating that week's cocktail list. Late last year we got a couple of great new bar programs at Alta CA and The Third Rail, and 2014 has brought no shortage of cool new places to get drunk in high style. Also, we are stupid with beer these days, and beer bars, and brewpubs. We may not have reached San Diego levels of craft beer density, but that day may not be far in the future.

With that, here are the 12 most notable new bars of the year.


%ABV
Come for the drinks, stay for the food... and then stay for more drinks. The team of Ryan Fitzgerald (Beretta), Erik Reichborn-Kjennerud (Dalva/Hideout owner), and Todd Smith (a founding bartender of Bourbon & Branch, now also of Hideout) has quickly become a critical darling with drinks like the smoky rye Jackal and creative takes like the Mumbai Mule. The food, classified as snacks, comes in the form of bar bites, so don't bother asking for a fork and a knife because they don't have them. The menu's big hit is the pimento cheese burger, but check out the kimchee fritter, a sort of take on okonomiyaki with plenty of dancing bonito flakes. — Caleb Pershan
3180 16th Street between Valencia and Guerrero Streets 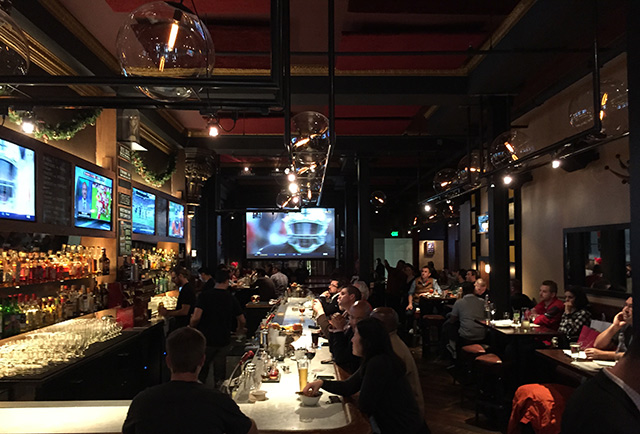 Bartlett Hall
It's simultaneously a restaurant, brewpub, and sports bar with cocktails, near Union Square, but I'll argue it's more bar than restaurant, made all the better with some excellent fried chicken and other delights from former Maverick chef Emmanuel Eng. There's an onsite microbrewery from Golden Gate Brewing Company in which beer gets pumped directly from the fermentation system into several taps at the bar, and there's a solid cocktail selection too  better than it deserves to be in such a tourist-heavy location  with SF-themed original concoctions like the Big Alma (gin, bonal, dry vermouth, orange bitters, soda water, and lemon), and the Miss Lotta (apple brandy, rye, lemon, honey, and absinthe). It's a cozy refuge from the nearby retail madness, and added bonus: there's a fireplace up front. Jay Barmann
242 O'Farrell Street near Cyril Magnin 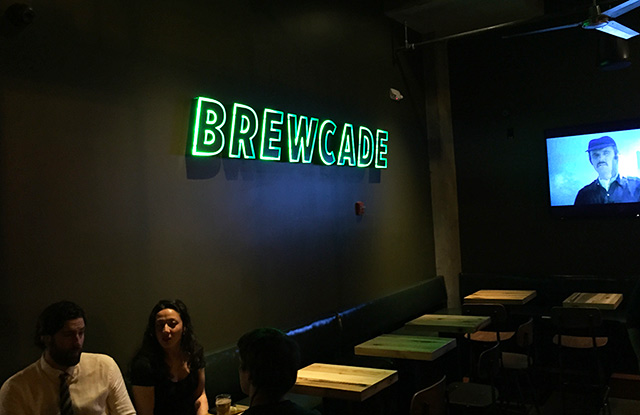 Brewcade
One of the more exciting and hotly anticipated openings of the year just happened this week in the Castro, and that is Brewcade. Part craft beer bar, part vintage arcade (as the name implies), the place has a well curated beer selection from a Monk's Kettle alum with 25 taps (highlighting local breweries like Linden Street, Drake's, and Heretic), and 24 video game consoles to go along with that, including the likes of Big Buck Hunter, Pac-Man, and Joust. What better way to wile away the hours of a potentially rainy winter than letting some thumb callouses grow and earning an unbeatable high score on Donkey Kong? A munchies menu will get you through to the next level, or you can hop next door for some tacos at Hecho once you run out of quarters. Jay Barmann
2200 Market Street at Sanchez 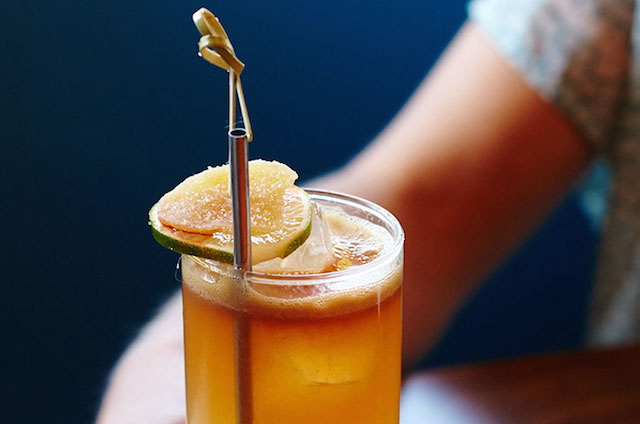 Chino
Danny Louie (formerly of the Alembic) is the force behind the bar at Chino, where a playful fusion philosophy extends beyond the plate and into the glass. Examples: the baijiu, almond milk, and lipton tea Chinatown Iced Tea, or a personal favorite, the drunken tea leaf with vermouth and chamomile. And immediately losing all credibility, I'm going to endorse the delicious rotating slushy boba cocktails (like the Boba Fett with vodka and thai basil). Yes, they come right out of a slushy machine, have that classic boba seal, and must be drunk quickly enough so that the warm tapioca balls don't freeze but slowly enough so that you're brain doesn't, either. — Caleb Pershan
3198 16th Street at Guerrero Street 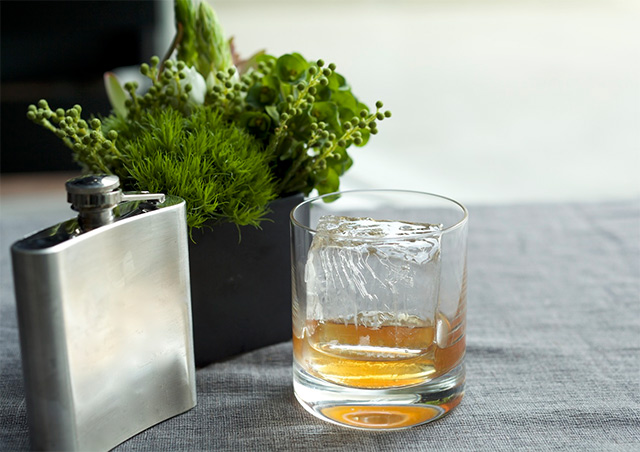 Photo courtesy of The Coachman

The Coachman
Possibly the classiest booze program to arrive in 2014 came early in the year at The Coachman. Bar master Erik Adkins of Charles Phan's restaurant group (Slanted Door, Hard Water) designed a set of unique and delicious cocktails to go with the British-inspired menu here, drawing on historic recipes and updating them per his acclaimed style. You've got a version of a classic Regent's Punch, with Jamaican rum, brandy, Pedro Ximenes sherry, pineapple, lemon, and soda; a Ladies Blush, taken from an 1878 recipe with Plymouth gin, creme de noyaux, absinthe, and lemon; and Robert Burns' Hunting Flask, which is Redbreast 12-year whiskey infused with currants, ginger, and lemon peel and served in a flask (see photo above). The food here, too, makes the drink list all the easier to work through without getting into trouble. Jay Barmann
1148 Mission Street between 7th and 8th 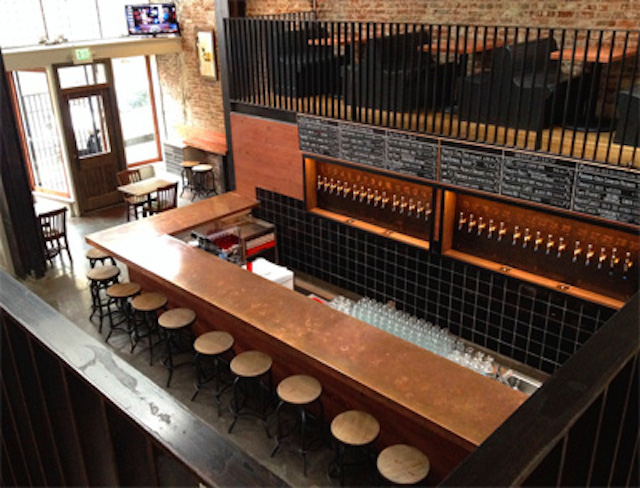 Hopwater Distribution
31 taps makes this Nob Hill beer bar a big player with a list that focuses on California's multitudinous offerings. A 30 foot copper bar greets you when you enter the rustic space and taps are numbered in case you forgot just how many of them there were. Representative suds from Russian River to Calicraft to Iron Springs to Coronado take you on a West Coast beer staycation, plus, ready to feed you is Bruce Paton, who goes by the "Beer Chef," and has worked pairings and beer into just about everything on the menu. — Caleb Pershan
850 Bush between Taylor and Mason Streets

The Interval
Tucked in a 1930s-era building toward the back of Fort Mason, The Interval is basically where the League of Extraordinary Gentlemen would hang out were they called to present-day San Francisco. Chock full of wacky mechanical marvels, books, and art, you might brush The Interval off as a steampunk Ruby Tuesday's, but you'd be doing yourself a disservice, as its pursuit of the esoteric arts is appealingly earnest. It doubles as the home of the Long Now Foundation, so you might also get to hear some smarty-pants seminar as you down one of their "earliest cocktails ever made" or "time-shifted concoctions that take hours to make but are ready whenever you arrive." But unlike a lot of places that take pride in their cocktail program, The Interval keeps non-drinkers in mind, with a great list of booze-free drinks and Sightglass coffee.—Eve Batey
2 Marina Blvd Bldg A, Fort Mason Center

Rx
After owner Dennis Leary pulled the plug on the year-old Tenderloin Trocadero Club, things got darker and more historical at its replacement, Rx. There, bartender Erick Ochoa of spots like Natoma Cabana has all your needs covered with his menu designations of Stimulants, Painkillers, Mood Stabilizers, and Stress Relievers. There's also a challenge afoot for Rx to claim the largest collection of amari, a group of italian digestifs, on the West Coast, and that's sure to cure what ails you. As they await that achievement, grab a Dante's with gin and Fernet or a Hot Dram with brandy and allspice: doctor's orders. — Caleb Pershan
701 Geary Street at Leavenworth Street 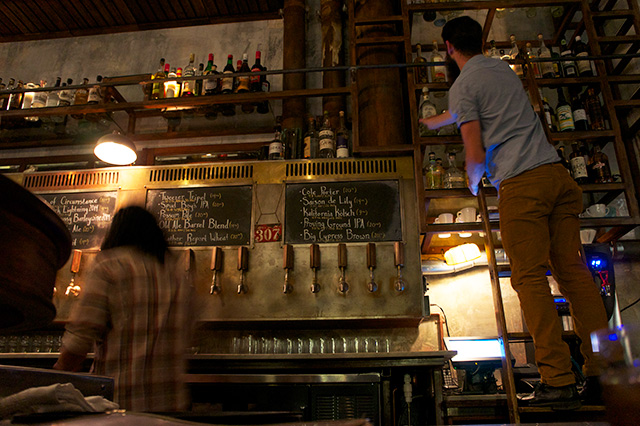 Magnolia Brewery/Smokestack
This big, bustling, always loud and crowded beer hall burst on the scene this spring in Dogpatch after reams of pre-opening press, and it was definitely worth the wait. Magnolia brewer Dave McLean had been promising this project for several years following on the runaway success of his Upper Haight brewpub, taking what had been a basement nano-brewery and turning it into a full-fledged operation with an onsite barbecue restaurant (headed by Namu Gaji chef Dennis Lee). The bar boasts an impressive 20 beers on tap with about 15 of those in-house brews at any given time, highlighting McLean's love of English ales. And, it's cool inside, with an aged industrial design that fits well into this increasingly crowded neighborhood. Also notable is their top-notch whiskey selection, and well made drinks. You will, most likely, have to wait a few minutes to get served though, because this place hardly ever has a slow night. Jay Barmann
2505 Third Street at 22nd 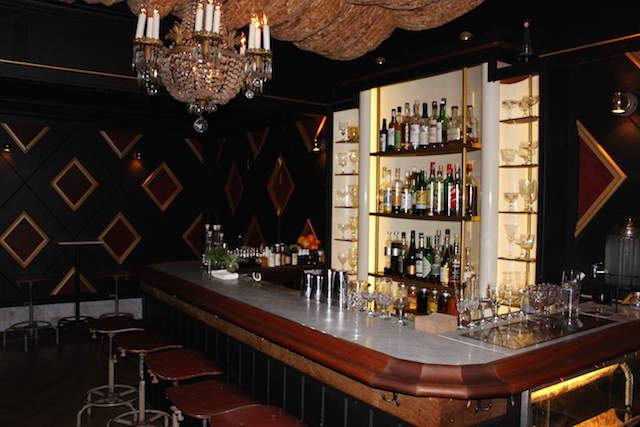 SRO
Joey Picchi calls himself a bartender, not a mixologist, but whatever he dubs what he's doing behind the bar-within-a-bar at Oddjob, it's fascinating. At SRO there's no menu to speak of, just your palette and Picchi's imagination. With that and top quality ingredients, expect in his words "the perfect drink that you didn't know you wanted." If you're lucky enough to grab one of just a few seats, you'd better take your chances since the place is packed on weekends and even weeknights with a following from nearby Twitter. When you do sidle up, ask Picchi to challenge your senses with counter-intuitive cocktails, like gin drinks sprayed with whiskey or frothy concoctions with red pepper instead of egg whites. — Caleb Pershan
9 Washburn Street (near Mission and 9th), inside OddJob 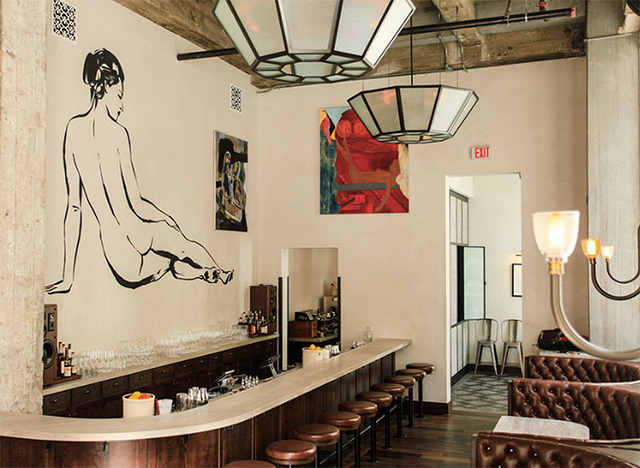 Trou Normand
All the way back in March this swanky new bar-restaurant debuted in the historic 140 New Montgomery (a.k.a. Yelp's new HQ), and it's the second venture from Bar Agricole owner Thad Vogler and his team. The theme here is brandy  the name in fact refers to the northern French tradition of sipping Calvados between courses to aid digestion  but the cocktail menu runs the gamut of classics, including a Corpse Reviver #1 (with armagnac and Calvados), a Brown Derby (bourbon, lemon, grapefruit, honey, and bitters), and a Hakam (gin, sweet vermouth, curacao, and bitters). And you can be assured everything will be precisely measured and mixed. This is a restaurant too, with some excellent charcuterie and a great grilled pork chop that is big enough to share. Most notable about this place, though, is the injection of cool that it brings to the downtown dining scene, with its sleek interior and a menu that doesn't pander to FiDi bros. Jay Barmann
140 New Montgomery at Minna 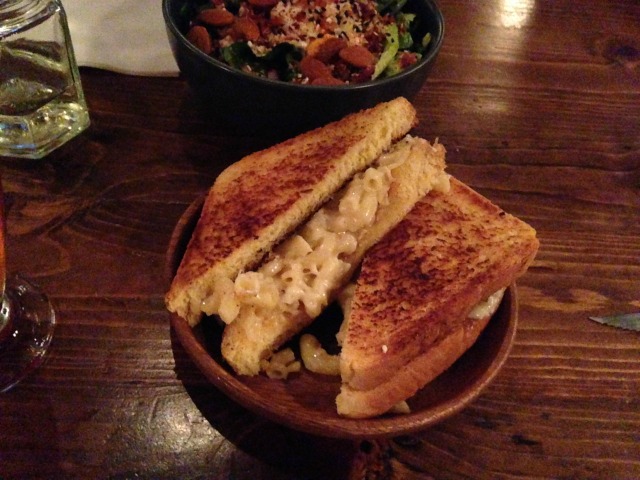 Woodbury's Birds Nest Salad lurks behind their Mac and Cheese Sandwich. As it should! Photo: Eve Batey

Woodbury
It's understandable if you avoid drinking on the SoMa stretch of Third Street due to its notorious happy hour scene. Though Woodbury, the surprisingly cosy and comfortable bar from Gitane alum Kinson Lau, who also owns neighboring Alchemist Bar and Lounge, isn't completely immune from that vibe, as a bar that focuses on beer and, shall we say, the more minimalist end of the hard-liquor spectrum (for a craft cocktail, go next door), they manage to avoid the worst of it. You want a decent beer? They got it. You want a shot to go with? That's their strong suit. It's a refreshing, pretension-free change of pace. And with a nice menu that goes just slightly beyond usual bar bites fare (standouts include the bird's nest salad, the fried peppers, and the mac and cheese sandwich), you're bound to eat just enough to soak up whatever you just shot down, hopefully before you start asking the bartender about The Governor. — Eve Batey
685 3rd Street between Townsend and Brannan Photo: Jay Barmann/SFist

Would you characterize today's events in San Francisco as those indicative of “any change in the market, whether actual or imminently threatened, resulting from stress of weather, convulsion of nature, failure or shortage