Reserve, a new app that has recently launched in New York, Boston, and LA, launches today in SF offering the chance of last-minute reservations at places like Foreign Cinema and flour + water for the bargain price of $5. But unlike that awful app we learned about earlier this year, Reservation Hop, Reserve isn't buying and selling reservations so much as they're offering a "digital concierge service," and they're doing it with the restaurants as willing partners.

It works like this: Once you're signed up for the app (there will be a waitlist for SF to start), you just go on and request a reservation at one of their partner restaurants, with an hour time window. The app then goes to work, contacting the restaurant and seeing if there's some availability, and if there is, great; if not, it will recommend something else for you either in the neighborhood or with a similar cuisine. It also works like Uber or Lyft by keeping a credit card stored on file and automatically charging it at the end of the meal, tip included, so you don't have any check to sign.

But if there are no reservations on, say, OpenTable or SeatMe for the restaurant in question, where are these tables coming from. Well, of course, the answer is that those reservations apps never show a complete picture of the restaurant, and Reserve is functioning like that extra, same-day phone call that sometimes gets you at a table due to cancellations, or other availability.

Additionally, Reserve can keep a photo of you on file (something many will no doubt not want to do) so that the host at the restaurant recognizes you when you walk in and greets you by name.

But, apart from this personalization, and the credit card on file, how does this differ from a regular reservation site that might end up with last-minute openings? Hong says that it's more about the "overall experience of the diner," and takes a lot of the guesswork, and web legwork, out of the equation. "Typically people are going back and forth between a review site and a reservation site, and maybe going back multiple times if you there isn't any availability at the restaurants they're trying to get into." The app also lets you rate the overall experience in order to inform other diners. 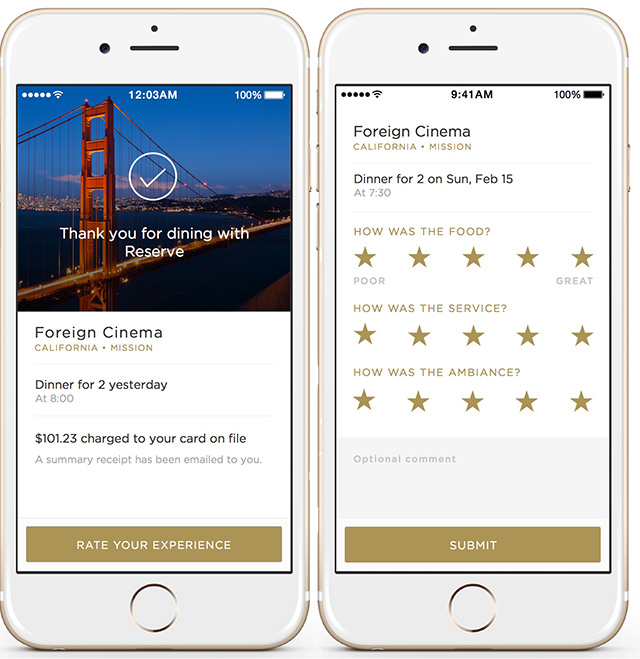 Also, rather than charging restaurants a monthly fee or a commission for every diner they seat, Reserve charges diners a one-time $5 concierge fee after their meal is complete. And they charge $10 cancellation fees (within two hours of a reservation) and $25-per-person no-show fees to the diners which they say they give back entirely to the restaurants.

With only 19 restaurants to choose from right now, the array is the biggest limiting factor here, but there are some respectable and hard-to-get-into names on the list, including Bar Agricole, Trou Normand, Spruce, RN74, Outerlands, and newly Michelin-starred sushi spot Kusakabe. But that list will likely grow.

And lord knows there are a lot of people with five extra bucks to spend around town in order to secure themselves a table somewhere  but does this harken back to the argument made back in July by Stones Throw general manager Ryan Cole about ticket-based restaurant reservations and reservation apps in general. He referred to it as "simply paying for access to spend your money," and added that, "The ultimate result is the restaurants and reservation companies are padding their pockets at the expense of providing an egalitarian experience for anyone who chooses to come and dine at their restaurant."

Or is this just the way of all things, with mobile apps trying to make our lives easier while also finding a new way to charge us a few extra dollars?

The debate, obviously, will rage on for the foreseeable foodinista future.

"If I didn’t know better, I’d think it was a case of short-term memory loss," jests the Chronicle's resident grump C.W. Nevius in an explainer on the locations of San