Nachos are a dish pretty much everyone can get behind. Not only can they be made vegetarian or vegan (sort of, via rubbery soy cheese), but they're basically just fun to eat. How can anyone say no to a big, sloppy pile of chips and cheese and beans or whatever that you are forced to share and pull apart section by section? Also, they make for great drunk food, and stoned food, and sports-watching food, and sunny patio food, and winter-depression-battling food.

SFist editor emeritus Brock Keeling even posed the question last year: Why Aren't Nachos A Thing? The thing is, they don't need to be a "thing" for foodinistas to reinvent. They are perfect as they are, and just as popular as ever, at least in our city's sports bars and taquerias. Today we bring you our roundup of San Francisco's finest in nacho artistry. And please, let us all forget this four-chip neo-nacho atrocity as soon as possible.


Señor Sisig
Sisig makes it all worth it, from tracking down the mobile operation to the inevitable line of the Filipino fusion faithful. They've been featured on Diners, Drive-In's, & Dives if you'd like to hear Guy Fieri opine on the expert meat marinade... or you could just take our word for it and try the salty, spicy, sweet and slightly charred cuts. Though burritos with sticky garlic rice are the truck's standby, standout nachos are another perfect vehicle for Señor Sisig's incredible sisig-style pork or chicken. -- Caleb Pershan
Various locations, most often 2nd and Minna and 300 Pine 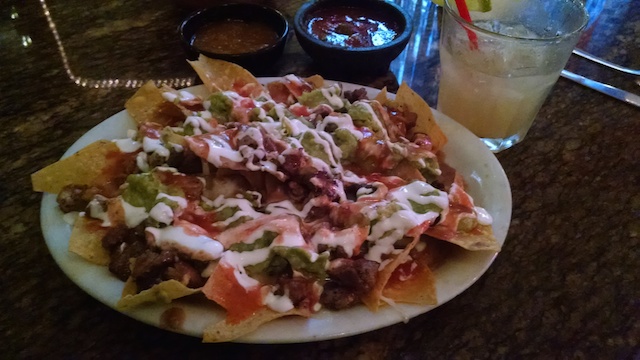 Puerto Alegre
When nachos call for a fork (as they often do) it's likely an issue of ingredient distribution and chip ratios. You won't find any such barriers to enjoyment at Puerto Alegre, where thin, highly fried tortilla chips are all you'll need to enjoy a panoply of cheese, sour cream, guacamole, picante salsa, and (if you're doing it right) rich, high-quality carne asada. A citrus-heavy cadillac margarita, as pictured, will talk you into "just one more" heaping chip, and though the moderately sized dish can be (and in this case, has been) eaten by one diner, it's probably better as a shared plate for two. -- Caleb Pershan
546 Valencia Street (near 16th) 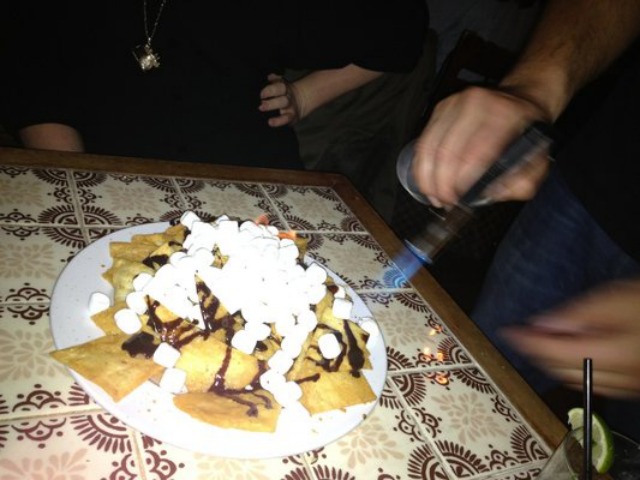 Velvet Cantina
The frustration of having to move my hand four-five inches to the left or right to ensure that my nacho chips get a little bit of everything has driven me to distraction on more than one occasion. The practice of a massive blop of sour cream in one hemisphere, a guac glob in another, and salsa plopped somewhere in between is one of the greatest horrors of our modern age. But not so at longtime Mission mainstay Velvet Cantina, where great care is taken to evenly drizzle the toppings over their house-made chips. For $2.50 more, you can add chicken or their chorizo, the latter of which is highly recommended. Oh, and while we're talking nachos, for dessert they offer s'mores nachos: fried tortilla chips, graham crackers, Mexican chocolate, and "flaming marshmallows." Amazing. -- Eve Batey
3349 23rd Street between Bartlett and Mission Streets 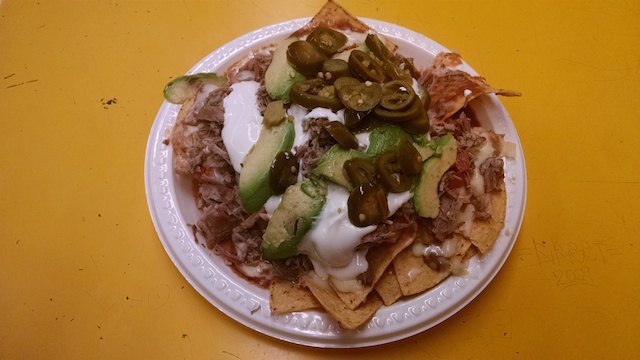 El Farolito Taqueria
Though the wisdom of data journalism passed over El Farolito's burrito in favor of La Taqueria's, in the nacho arena the slighted taqueria is nothing if not a champion. The style is chunky, with thick cuts of meat (here, carnitas) sliced avocado in favor of guac, and jalapeños for days. Chips, too, are thicker: the better to withstand the delicious burden. But, in the case of these nachos, a fork is no faux pas. -- Caleb Pershan
2779 Mission Street (at 24th) 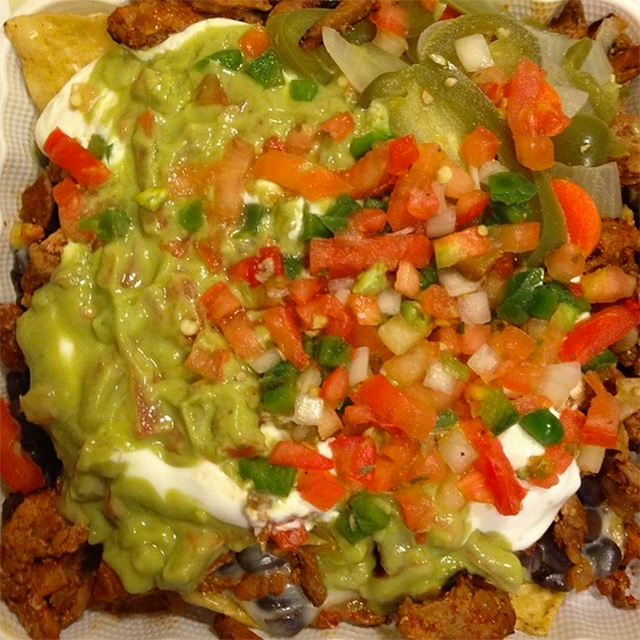 El Castillito
While Castillito is one of the more humble taquerias about town, they're also a Castro favorite and arguably the business everyone wanted to protect when they made noise about Chipotle trying to move in down the street last year. Castillito is known for their al pastor, which is of course the best thing to have on a plate of nachos. And they aren't shy with the toppings here. You can expect a pile of chips and cheese with a mountain of meat and a deluge of guac, pico, and crema obscuring the whole thing. And it's good. -- Jay Barmann
136 Church Street near 14th 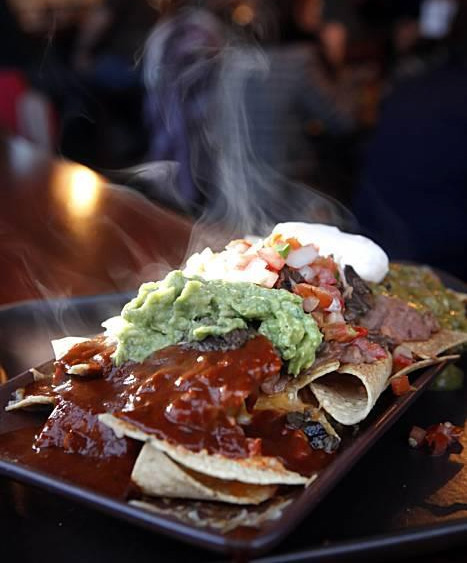 Green Chile Kitchen
The glorious nachos at this decade-old New Mexican spot in NoPa are the kind of thing you have to Instagram, and gush about, and go back for more of. You can get them with your choice of meat (or sautéed vegetables), and green or red chile sauce, and I'll go ahead and recommend the red, with pork. They come piled high with fresh chips, beans, guac, and crema, and they are delicious. And if you're on a serious binge, there's always a pie milkshake waiting for dessert. -- Jay Barmann
1801 McAllister Street (at Baker) 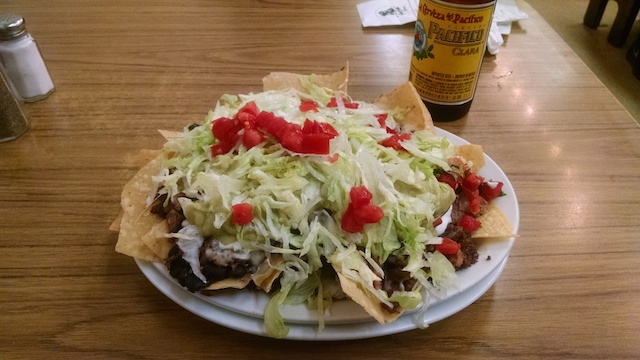 Pancho Villa Taqueria
Not automatically heavy, nachos can also be refreshing and light. That's the approach at Pancho Villa, where lettuce and diced tomato adorn the taqueria's offering. The choice of succulent meat and rich beans is yours: carne asada and black beans are in the photo, but refried beans make for easier chip-dipping and that perfect crunch-softening. -- Caleb Pershan
3071 16th Street (at Valencia) 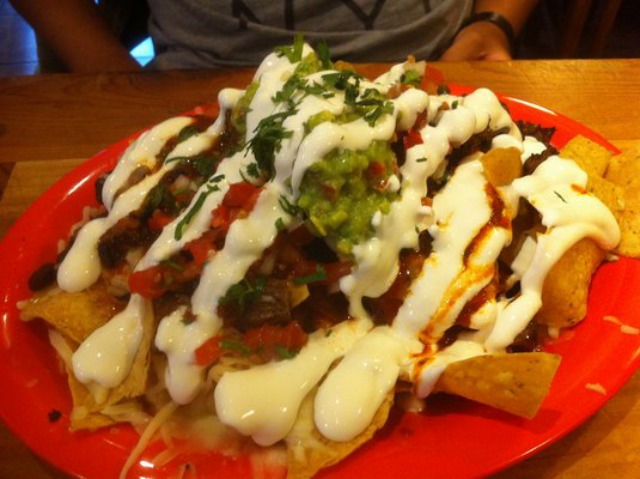 The Little Chihuahua
Little Chihuahua's home to the Choose Your Own Adventure of nachos. Options include "Regular," shrimp, carne asada, grilled vegetables, wild mushrooms, pollo asado, carnitas, or chile verde chicken. Unlike a lot of places, they make sure you know that two of their four bean options (their whole black and refried black) are vegetarian, which is important to folks who prefer to avoid even hidden animal in their foods. Add to that a solid chip offering, a generous hand with the guac, and their salsa bar to determine your individual level of heat, and you're in nacho paradise. -- Eve Batey
292 Divisadero Street, 4123 24th Street or 581 Valencia Street 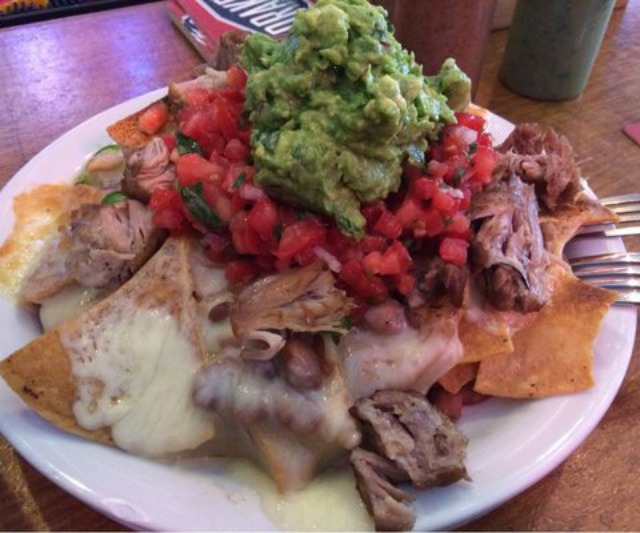 Photo of Underdogs' nachos with pork by Priscilla W./Yelp

The Taco Shop at Underdogs
Underdogs' nachos don't come with any nasty surprises. (Sidenote: If you put zucchini or broccoli in my nachos without a clear warning, I hope terrible things happen to you.) It's a simple concoction of pinto beans, Monterey Jack, jalapeños, guacamole and the ominous-sounding "Mexican sour cream" (i.e. crema). The things that take it over the top are the generous portion of their house-made pico de gallo, and their chips, which might be some of SF's best. Substantial but not mouth-injury inducing, they're exactly the right mix of salt, fat, and corn. For two more bucks you can add steak, chicken, or pork, and if you ask nice you might even get them to add on some of their fantastic grilled shrimp. -- Eve Batey
1824 Irving Street between 19th and 20th Avenues 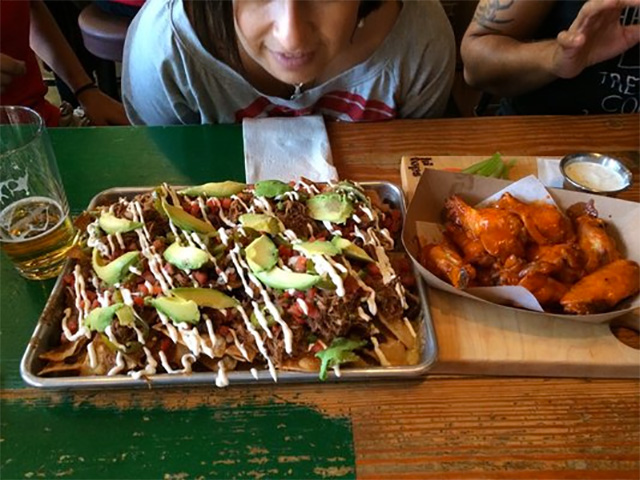 Hi Tops
The first thing most people mentioned when we called out that terrible plate of four chips at Eureka was the sheet-tray mound of nachos you could get at nearby gay sports bar Hi Tops for just a few bucks more. The chips are good, the pulled pork is sweet and tangy, but these nachos are also monstrous enough for a meal for three people even without any meat on them, with generous amounts of beans, cheese, jalapeños, and fresh avocado. Perfect for any game day, or any Tuesday. -- Jay Barmann
2247 Market Street (at Sanchez) Puerto Alegre's carne asada nachos: Caleb Pershan

“Maybe we should have made it clearer that our use of ‘local’ isn’t about being local,” is a thing owner Yaron Migrom said about his restaurant Local’s Corner to San Francisco

A dead body found floating in the SF Bay near Alcatraz is believed to be the remains of Dan Ha, a San Francisco man who'd been the subject of a large-scale search following