The Elbo Room is entering what could be its twilight year(s) with current owner Matt Shapiro's lease expiring in November 2015. Now, 647 Valencia Street property owners (and Elbo Room founders) Dennis Ring and Susan Rokisky-Ring have outlined a controversial vision for the space's future, as Mission Local breathlessly reports.

Shapiro has tried to quell public dismay since February, when preliminary documents for a 9-unit new condo project on the property were filed with the Planning Commission. Per the plans, the bar would be razed and the public incensed, as it was during a community hearing last Thursday when the Rings further explained their personal stake in the development. Namely, they'd like to retire there.

“This is part of our vision for ourselves, for my husband and I to spend the rest of our days,” Rokisky-Ring said at the heated meeting. The couple has lived in the Mission since the late 1960s and currently resides in a Cumberland Street house with too many stairs. They'll need an elevator for their dotage, they say. OnPublico has the complete plans here, and notes that "The community packed the Mission Police Station with most people opposed to the project and some prepping to organize against it."

Rokisky-Ring further pledges that they will try to find a new space for the Elbo Room to relocate to nearby, but this comforted no one. Nor did it comfort anyone that the project, which will likely be market-rate condos, is being billed as "senior-friendly housing."

The space's history further complicates the Rings' demolition and development plan. It's said that there's been a bar at 674 Valencia since the end of Prohibition, and famous past incarnations include the Gaslight, and Rikki Streicher's lesbian bar Amelia's (whose sign the Elbo Room staff uncovers each Pride season). Architect Kerman Morris, who also designed the V20 building under construction at 20th and Valencia Streets, mentioned an ongoing Planning Department assessment from a hired historical consultant that could modify or outright derail the Rings' plans. 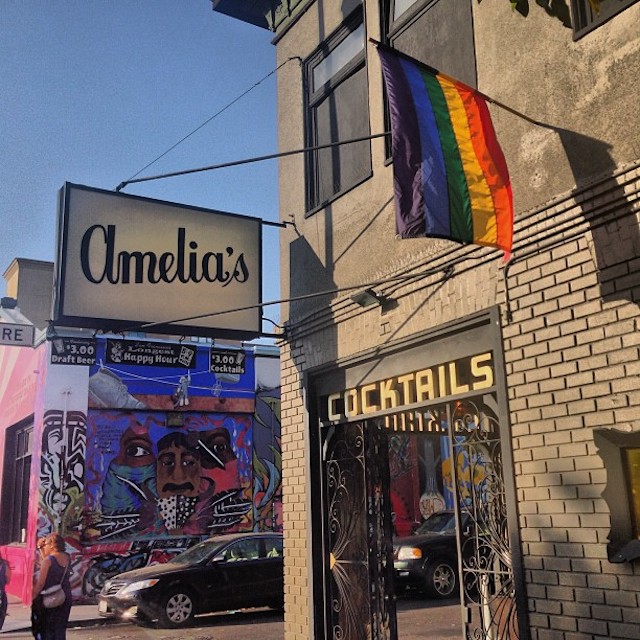 While there are hurdles to development in San Francisco generally, when it comes to a beloved and historic space like Elbo Room, they could prove insurmountable. For now, though, the plans are another fine excuse to retire to Elbo Room after work today. Their happy hour  billed as the longest in the city  starts at 5, and now who knows how long it goes.

Expect this fight to be a loud one, and for it rage on well into 2015 before the final fate of the bar is decided.

Previously: Elbo Room Might Not Be Long For This World

Outdoor sirens r back online after temporary deactivation. The cause of last night's & this morning's siren activations are under review.— San Francisco DEM (@SF_emergency) November 9, 2014 Did you hear San

by Daisy Barringer I think I should start taking a Xanax before every 49ers game. That way, instead of spending three+ hours wringing my hands, pulling my hair, and wondering it is possible