Forest City, the developer behind the huge new 5M mixed-use complex that's proposed for the block surrounding the Chronicle Building that we talked about last month, has just revealed the preliminary designs for the thing. And unlike the majority of new high-rises going in downtown, as the Chron's John King reports, this one will be designed by an American firm, New York-based Kohn Peterson Fox.

KPF Associates is known for sleek glass buildings like the Shanghai World Financial Center, The Conrad Miami, the Mandarin Oriental in Las Vegas, and the Gannett/USA Today Headquarters in McLean, Virginia, as well as for their huge range of architecture types from retail, to government buildings, to hotels and super-tall skyscrapers in Asia.

As reported earlier, this project will include large amounts of office, residential, and retail space, but there are two optional schemes the public will get to weigh in on  one with more office, and one with more residential. The Chronicle Building will get restored as part of the project, and a single four-story 1906 brick building on Minna Street will be saved (as seen below) in order to provide a historical backdrop for a public plaza, and new space for arts and community organizations.

One especially cool thing  in a nod to SoMa's masonry industrial architecture  is that the tallest tower in the complex will get both a glass and brick-colored skin, made from recycled-brick panels.

The tallest tower, a 470-foot condominium building on Fifth Street between Minna and Natoma streets, would be skinned partly in panels composed of recycled bricks. The office high-rise to the south would be arranged as two interlocking sections with heights of 430 and 380 feet; the taller side of the shaft would have vertical white-metal fins that meander slightly as they rise, while the other section would feature inset red metal bands running side to side.

The 4-acre project, which spans an area bounded 5th, Mission, Howard, and Rose Streets, will go before Planning on November 20 and receive its first round of public comment there. The first actual vote on the project will happen in the spring.

As for the height of the thing, they'll be applying for a special-use district in order to get the height restriction for the block lifted. And as I mentioned earlier, anyone who would like to argue against that should consider how much cooler this thing will look compared to the nearby, atrocious Intercontinental Hotel, the views of which will be partially blocked from many angles if this thing gets built. 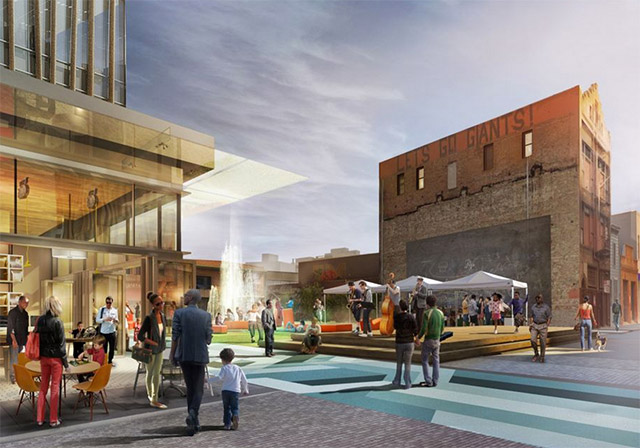 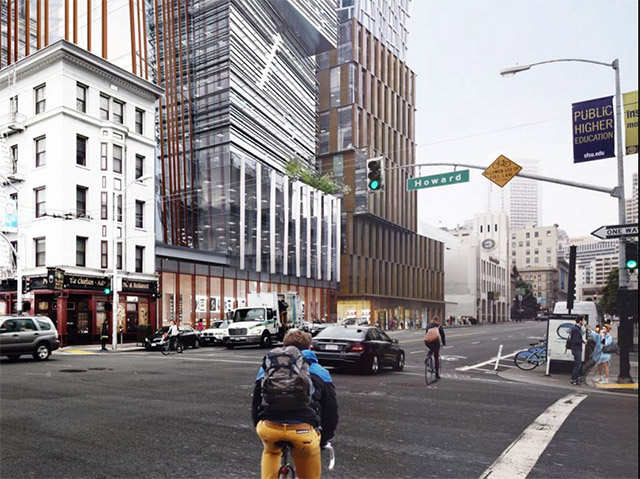 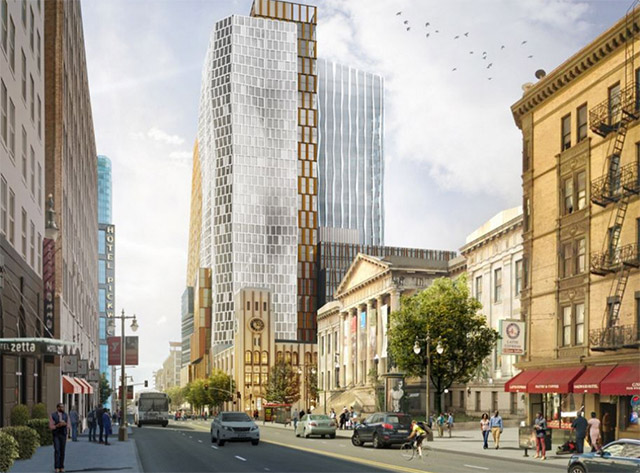 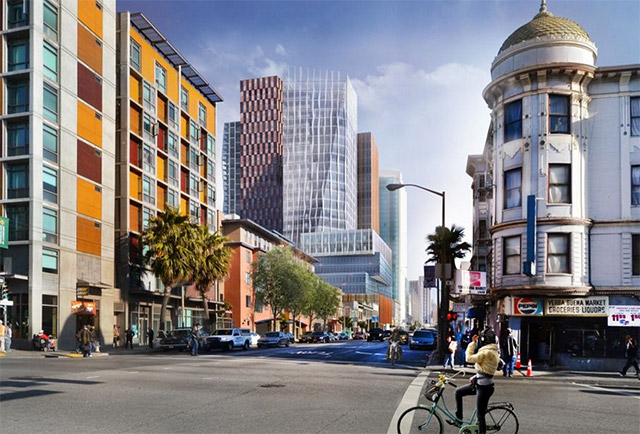 BART is experiencing major delays this morning, after a woman was fatally struck by a train. According to BART spokesperson Alicia Trost, service at San Leandro Station was halted on reports of a

Writer for [Good] spends hours pushing stroller through SF, pens love letter to city as a result. Some techie got his chocolate in another techie's peanut butter: Now you can find Uber pickup