I've never been to any Election Night parties in S.F., so when a politically connected friend invited me along for a four-party tour last night to kiss a few rings, I figured what the hell. I'll go. For journalism. There was, of course, nothing journalistically exciting about any of these events  they were, by and large, exceedingly boring parties filled with nerdy recent college grads, city employees, various ring-kissers, media types, and elderly volunteers, with just a smattering of free food. The highlight, easily: Jane Kim's latest pair of shoes.

8:00 p.m. We arrive right on time for the first of a series of Board of Supes victory parties, knowing that the only ones that will be at all exciting will be this one and David Campos's, because Chiu and Campos are of course warring over a seat on the state Assembly. For the first 90 minutes, the Chiu party is about as exciting as a retirement home birthday party, complete with approximately 50 Chinese-American retirees. Chiu has not arrived and no one knows when he will.

Mayor Lee, I overhear, is hosting his own party  for Prop K, or something  at the Julia Morgan Ballroom in the Financial District, but we won't be going to that.

I dip into the free salsa, taste a bite of my friend's plate of roast suckling pig, courtesy of a Chinatown restaurant (it's chewy), and sip on my ginger ale quietly while checking Facebook, because I'm on Sober November. 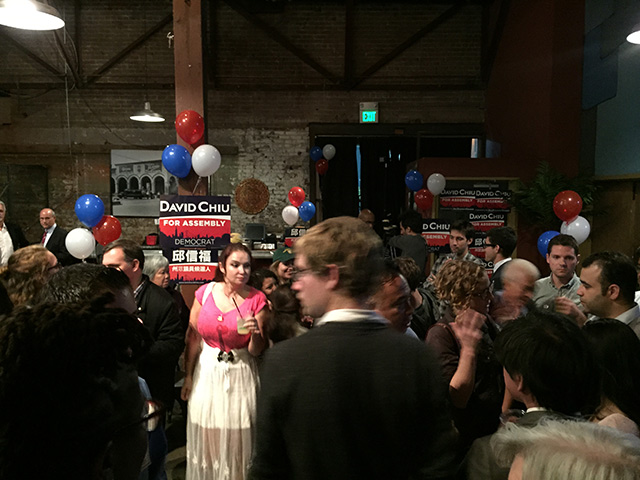 8:45 p.m. It's clear that Chiu will not be arriving for a while, perhaps not until more election results come in. On a projector on one wall we see the only results that are in, from about 40,000 mail-in ballots, showing Chiu with a healthy lead of 56 percent.

I overhear someone say, "Every Chiu party's the same. There's always a roast fucking pig in the corner that tastes terrible, and 50 old people swarming the food."

There are, at least, free drink tickets. But I am not drinking.

9:30 p.m. Still no Chiu, and we're getting restless. The room has filled now with various wonks in suits. This will turn out to be, by far, the most suit-filled room of the evening, proving the point that the Progressives are always making about Chiu being a conservative, even though he is in fact a fairly liberal Democrat.

9:45 p.m. Chiu arrives, talks to a news camera, gets swarmed by supporters, his dad, and other well wishers. We say hello and leave. 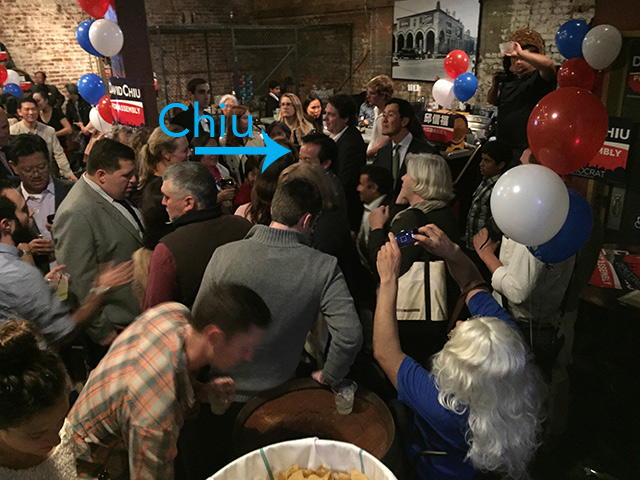 9:50 p.m. Jane Kim ran virtually unopposed for District 6, but everyone needs to have a victory party anyway, and she had hers in the heart of her district, at the bar with the best cocktails. SRO, the bar-within-a-bar in back of OddJob, has really good cocktails anyway, and Joey the bartender was back there entertaining a small and increasingly drunk crowd with his butane torch and various oil spritzes.

Jane is holding court right outside the door wearing some amazing shoes that I do not ask her about, to my great regret as a journalist. They looked like this. 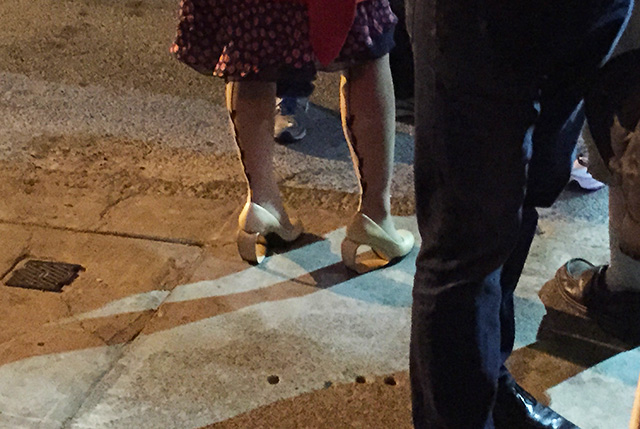 Remember her pink Pride heels? These are better than that.

The only photo that seems to exist so far of Jane's red-jacketed look for the evening is here, but hopefully that will change.

10:25 p.m. The buffet at the Kim party is way better than at the Chiu party, but a man in an enormous, reclining wheelchair has been blocking it for the last ten minutes.

Bespoke cocktails at the back bar are also taking too long for my friend who is indeed drinking, and there is no one else to talk to after saying our hellos to Jane. So we leave.

10:35 p.m. A quick zoom over to Noe Valley and we are in the crowded bar area of Valley Tavern, where we were informed Supervisor Wiener would be shaking hands and congratulating himself. He is nowhere to be found.

There are a number of people in various states of near-inebriation, and this bar has dozens of beers on tap, which must be nice for them.

The party is doubling as a victory event for someone running for Community College Board, and I recognize no one. The bartender looks pityingly on me as I order a ginger beer.

My friend finds out that Wiener has left to go to another event but promised he'd be back. We doubt this, and we leave. I carry my bottle of ginger beer out the door, despite its resemblance to actual beer, and hope for the best.

10:45 p.m. We decide to skip the Malia Cohen event at Mighty because it's getting late, and we figure the crowd might be more energized at the Campos party. We are correct.

It's El Rio after all, and despite the presence of some overexcited progressive cheerleaders (ahem, Tim Redmond), the progressives turn out to be the most fun.

Campos is holding court at the bar with campaign manager Nate Allbee. Supporter and Harvey Milk Club president Tom Temprano is angrily waving his phone in the air saying, "The SF Elections website is down. On Election Night. You have one fucking job, people!"

The backyard is full of anxious volunteers and current and former supervisors. Tom Ammiano arrives and everyone gives him hugs. People seem drunk and happy. 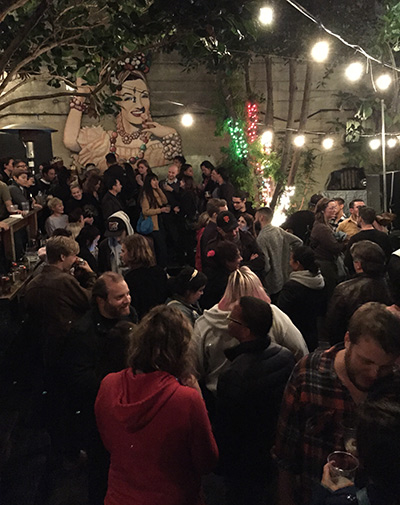 Chris Daly lords over the pool table area. John Avalos is having dozens of quiet conversations.

Everything smells vaguely like B.O. and stale Tecate, which is pretty typical for El Rio.

And in walks Rose Pak. Rose Pak, who aligned herself with Campos two years ago despite earlier supporting Chiu, hugs Campos and grabs his ear for a few seconds, perhaps promising bigger and better things from her king-making machine if he loses the Assembly race.

Also: Has Rose Pak ever set foot in El Rio before? 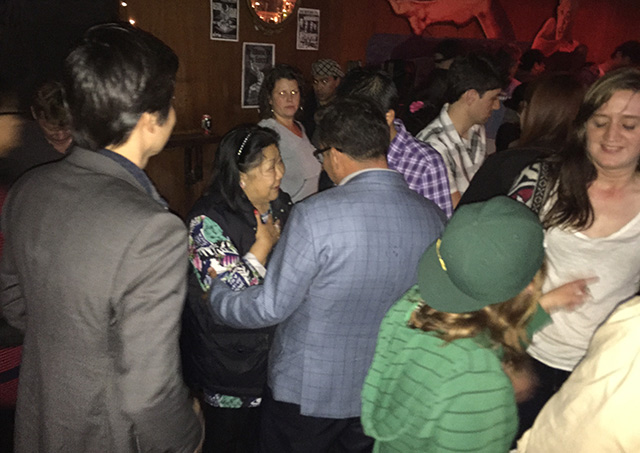 11:00 p.m. Tim Redmond (formerly of the Guardian, now of 48Hills) is still running around the room telling anyone who'll listen that "by my calculations..." Campos is going to win. This has something to do with polling and absentee/provisional ballots and his general fervor for this entire process which might just be enough to wish anyone into office.

Campos takes the stage in the backyard, thanking the 500 volunteers who took part in the campaign and helped get out the vote. He repeats refrains like "San Francisco is not for sale," and "We are not finished," etc. But this is hardly a concession speech, as some in the Chiu camp are hoping. He insists there are still ballots to be counted.

The screen above the stage where they were projecting election results has gone blue.

This is what's appearing on everyone's phone, causing apoplexy in every direction. "Can anyone load the SF Elections site?!?!?" screams everyone, everywhere. 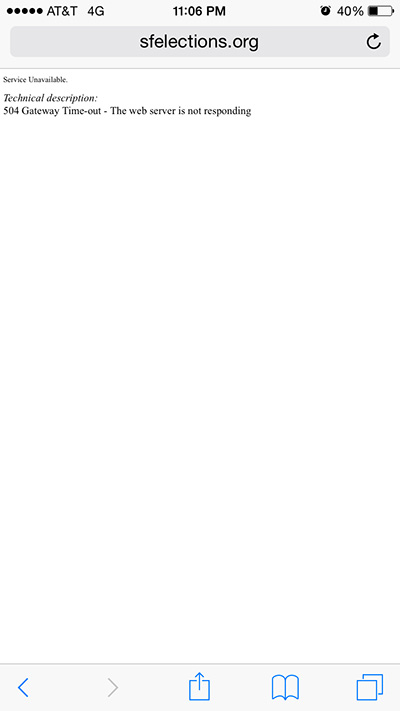 "We won't know anything 'til Friday!" screams Tim Redmond.

"Let's get another beer," murmurs every other person.

"Do you have any coke?" asks random bearded guy who seems overexcited already, and drunk.

"I gotta go home," says Bevan Dufty, says to us. "But you guys are at a winner's party. Just you wait."

There were few (if any) election day surprises in California's statewide races. The end! Now go read about Lou Seal! Ha ha just kidding, we're still going to tell you about what happened.