Amidst the mayhem of last night following the World Series win, some people were just trying to get home from work on the Peninsula in a company-sponsored shuttle bus. At least one bus, which may or may not have been a Google bus, came under attack by revelers in the Mission, as seen in the photo above. Twitterer Joe Veix says he saw "a mob of people converge on this tech bus, throw glass bottles at it, and tag it, yelling 'fuck Google.'"

Another bus shown below was headed down Castro Street toward Noe Valley around 10:30 p.m. when it ran into a snag: A SFMTA vehicle was busily trying to remove all the toilet paper that was strewn over the electrified Muni bus lines and was blocking the intersection.

There's no word on how long that shuttle bus remained immobilized. And there is also no word on who the hell was just coming home from work at 10:30 p.m. on the night of Game 7 of a Giants World Series. 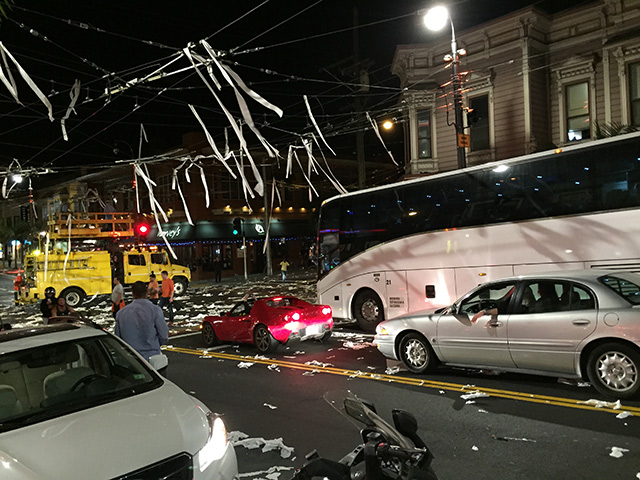 Fire Dept on the scene pic.twitter.com/vXzCxHsJXL— Kevin Montgomery (@kevinmonty) October 30, 2014 Well, it happened again, guys. As on the evenings of the SF Giants' 2010 and 2012 victories, chaos

—
Tech Shuttle Vandalized During Post-Game Celebrations; Another Got Stuck Due To Toilet Paper Cleanup Effort
Share this