For some of us, brunch is a chore, and going out for it is a rarity. (I'm kind of with Grub Street on this one... brunch is, most of the time, pretty mediocre, and people in their 20s and 30s seem way too obsessed with it.) Anyway, for many, it is the most important meal of the week, so I'll shut up and just present you with our picks for the city's best brunches. And one in Oakland.

Brenda's French Soul Food
Brenda's has to come first on this list because Brenda's is the pinnacle of hangover brunch food. The biscuits, the shrimp and grits, the beignets, the croque monsieur, the Hangtown fry  it's all good. You will need to be patient, because like most other popular brunch options around town, there's always a wait. But unlike a lot of brunch spots, you're not going to leave disappointed after you stood around for an hour waiting for that table.
652 Polk (at Eddy) 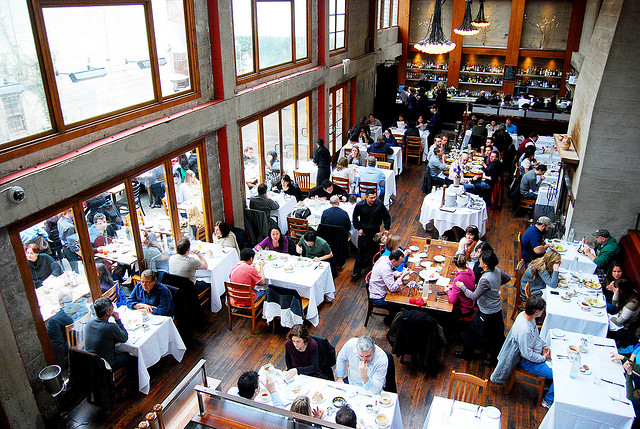 Foreign Cinema
Still a Mission staple after all these years, Foreign Cinema's outdoor-ish brunch can be enjoyed almost year round beneath the projector screen showing (what else?) films from around the world. Menu items range from breakfast bites like gourmet "Pop Tarts" and pecan sticky buns to creative egg dishes like truffle omelets and balsamic fried eggs. If you're struggling, the hangover soup is sure to get you through your Sunday. (11 a.m. - 3 p.m. Saturday and Sunday)
2534 Mission Street (at 21st Street) 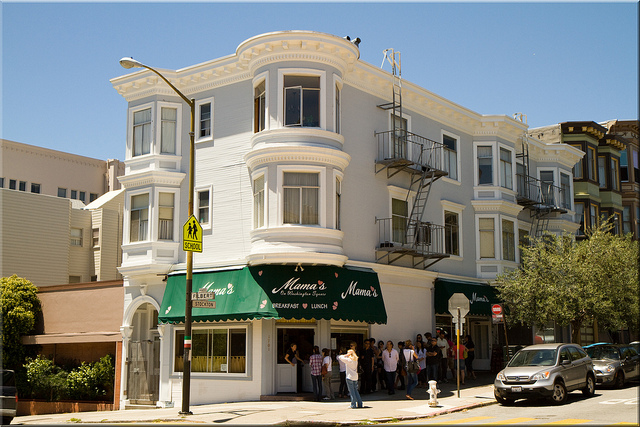 Mama's
Mama's in North Beach still, after all these years, has lines around the block, even on weekdays  and as we learned earlier this year, all that guidebook love has necessitated the opening of a second location that's coming soon. If you haven't been, gird yourself for that line at least once to see what the fuss is about (hint: it's the homemade berry jam). After fifty years in business, Mama's still packs in capacity crowds for their pancakes, scrambles, and Benedicts. And don't miss the homemade Kugelhopf (brioche bread with golden raisins, cinnamon, dates and almonds).
1701 Stockton (at Filbert) 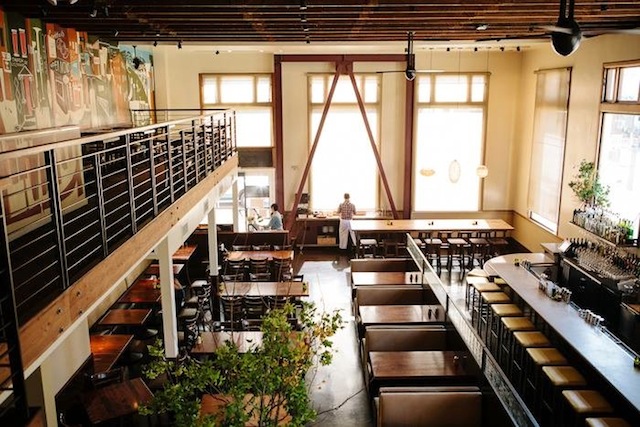 Nopa
We hesitate to tell anyone who doesn't already know that Nopa does good brunch because, well, the place is stupidly packed seven days a week as it is. Everything's pretty great, from the baked eggs to the fried pickles to the butter-basted eggs with tasso ham and cream, and of course there's always the burger. But you will wait a while if you don't have a reservation (be glad they even take reservations), or you'll end up hovered around that communal table feeding at the trough with the rest of the yuppies.
560 Divisadero (at Hayes) 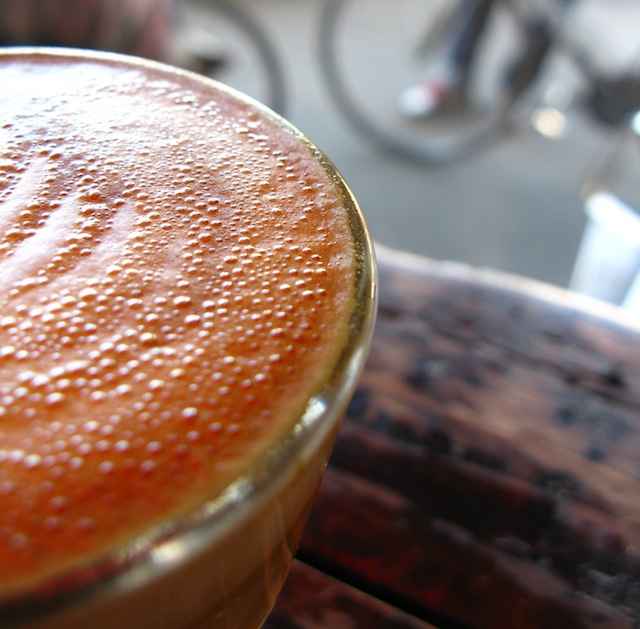 Waking up the right way at Outerlands. (Photo: Amber Fox)

Outerlands
Did the Outer Sunset start getting hipsterized because of Outerlands, or did Outerlands open in the Outer Sunset because the place was already hipsterizing? That might be a chicken and egg situation, like the signature Eggs in Jail offered during Outerlands' amazingly popular brunch service. Other faves include Dutch pancakes cooked in cast iron, slow cooked farm eggs and cracked farro grits. Warning: Long lines, anywhere up to three hours, are not uncommon. One way to speed up seating is a willingness to sit outside, so bring a jacket  and you can always stroll over to Ocean Beach with some brown-bagged Prosecco, to pre-game, whilst waiting.
4001 Judah (at 45th Avenue) 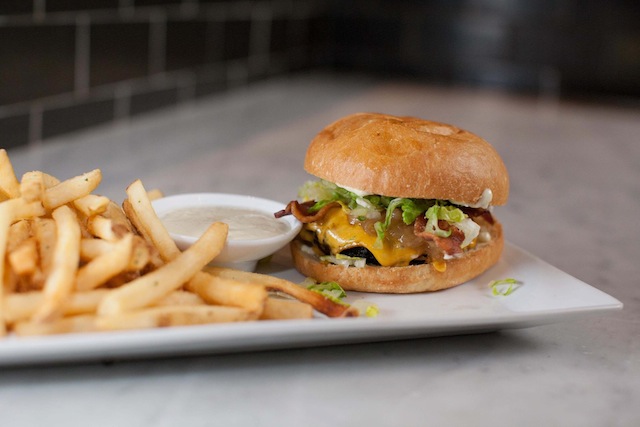 Park Tavern
Over in North Beach the bustling evening scene at Park Tavern has spawned an equally bustling brunch scene, but really, the reasons to go here are the excellent pancakes, the cast-iron baked eggs with gruyere, spinach and serrano ham, and the brunch cocktails like their "Boozy Smoothie" with bourbon, espresso, and banana. Added bonus: warm pastries from Starter Bakery.
1652 Stockton (at Filbert) 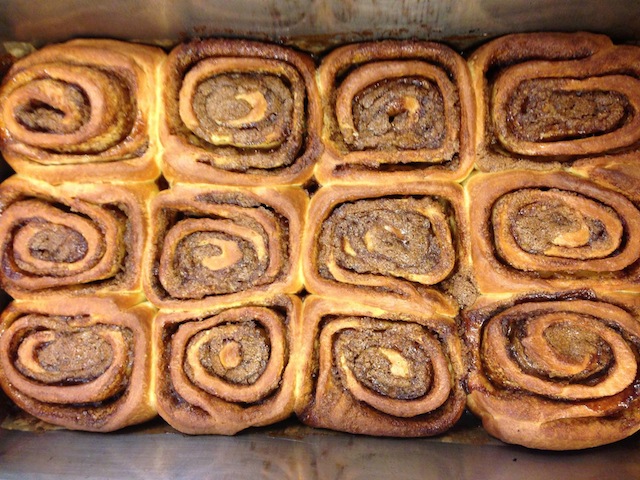 Preparing of the cinnamon rolls at Presidio Social Club.

Presidio Social Club
Presidio Social Club always feels like a genuine escape from the city, while still being in the city. They do a decent rendition of chilaquiles, a good burger, and you'll never go wrong with the meatloaf, but the main draw here is having an airy room to sit with a friend on a bright Sunday morning, with some sunglasses on, drinking a Bellini and comparing notes about whatever went down last night.
563 Ruger (at Lombard, in the Presidio) 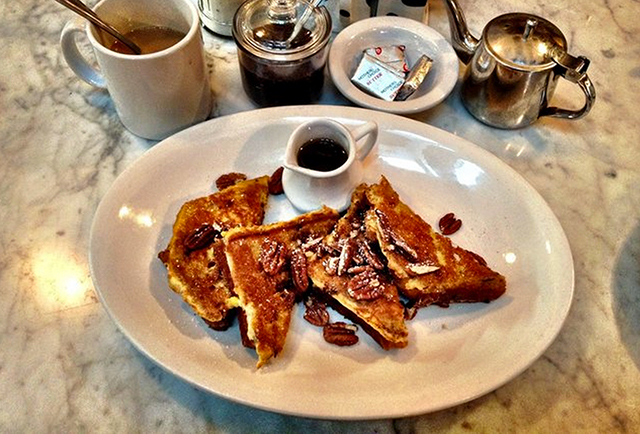 Dottie's True Blue Café
Like Mama's, Dottie's has been guidebook-endorsed for a couple of decades, and therefore never doesn't have a line unless you arrive very early. Even its sketchy Sixth Street location doesn't deter people from queuing up for those famous pancakes, and generous, hangover-soothing scrambles. Don't miss the grilled chili-cheddar cornbread, or the weekly changing specials either.
28 Sixth Street near Market 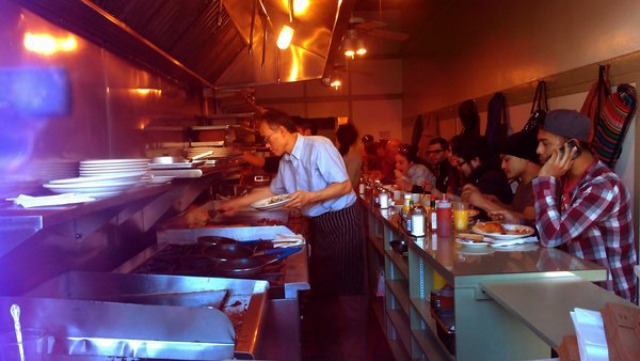 Art's Cafe
A slender joint tucked into an Inner Sunset stretch of Irving Street, Art's has been serving breakfast and lunch for over 60 years. A traditional American diner from the days before kitsch, it was bought by a Korean couple who've given some items a fantastic melting-pot twist, like their omelet with tofu, kim chee, sausage and korean hot bean paste. The for-real can't miss is their hash brown sandwich, which has the perfect great/salt/carb ratio to cure (or at least lull) even the worst hangover. (Warning: Don't bring a big group—Art's is counter seating only.)
747 Irving Street (between 8th and 9th Avenues) 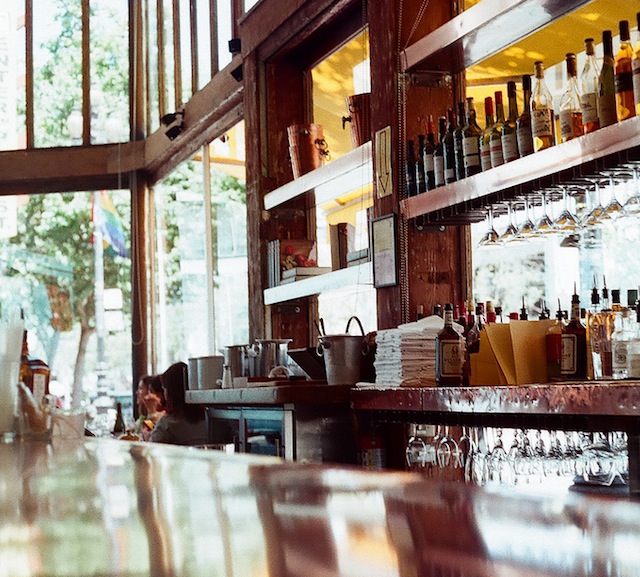 Zuni Cafe
We don't have a lot of fond hangover memories, but one of the fondest is sitting down to brunch at Zuni (Sundays only) and through bleary eyes seeing the Zuni burger arrive in front of us, rosemary focaccia wafting up to our noses, a glass of champagne just barely starting to take the edge off. You feel like a civilized human here, and given that the burger is only offered at lunch and brunch, and given that we never go out to lunch, Sunday is pretty much the only time to get it. It comes with pickled onions but make sure to get some blue cheese too, and some shoestring potatoes. And maybe some baked clams to start.
1658 Market (at Rose) 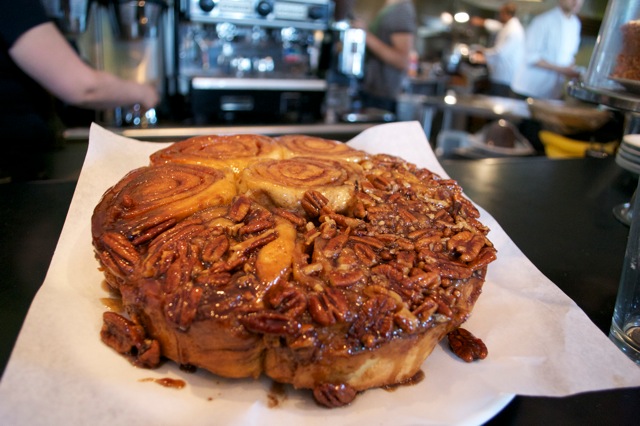 Brown Sugar Kitchen
The award for longest lines and greatest brunch accolades across the Bay goes to West Oakland's Brown Sugar Kitchen, where chef Tanya Holland has been slinging reliably great fried chicken and waffles (with brown sugar butter) for a decade now. The menu is pretty simple, so just say yes to everything: yes to the shrimp and grits, yes to the sticky buns (if they have them), yes to the egg sandwich on a croissant. But someone at the table will have to order the fried chicken, and you will have to eat that too.
2534 Mandela Parkway, Oakland

What are you up to Saturday afternoon? If you're not sure yet, we've got the answer: the opening of City At Large: Photographs of San Francisco. Twelve photographers, many of whom you've probably

According to the San Francisco Police department, the driver they believed pulled a u-turn to shoot a pedestrian he'd almost hit has been arrested, six weeks after the crime took place. You remember