Guys, we get it. It's hard to keep up with the growing food truck scene in San Francisco. What with monster mobile food vendor gatherings like Off The Grid, a constant influx of new brightly painted trucks, and uh, the fact that they move — it's tempting to just burst into tears, order a pizza, and stay inside until 2015.

Don't give up yet. There are diamonds in the rough world of food truck eating, and we've made a point to collect these precious jewels for your perusal, judgement, and yes, enjoyment. All of these trucks can be found within city limits, and yes, you can follow most of them on Twitter to figure out where they'll be in the upcoming days and weeks.

We'd like to first call your attention to our 2013 food truck list — all ten of these trucks are still some of the best (and our favorites). Rather than attempt to integrate them into an updated list, please consider these 12 trucks as an essential addendum to our original round-up. Yes, this does mean we are recommending, in total, 22 food trucks. No, we can not take responsibility if you eat all 22 of them in one day and find that your pants don't fit. Now, in no particular order, here are 12 must-try food trucks in San Francisco:

Surprise! This food truck round-up is not kicking off with locally sourced, crazy fusion cuisine. It's starting with a taco truck. A to-the-point, good-and-greasy taco truck, one that has become a fixture in the Mission thanks to the boldness of its truck design and the incredible richness of both the lengua and al pastor (also, tacos are $2). These tacos may not reinvent the way you think of Mexican food, but we appreciate that El Tonayense is legitimate street food. A vocal and loyal fan base attest to the longevity of Tonayense, and the tastiness of their tacos. Pair 'em with a brown bagged tall boy from Foods Co and call it a day.
At Harrison and 14th, 17th, and 19th Streets 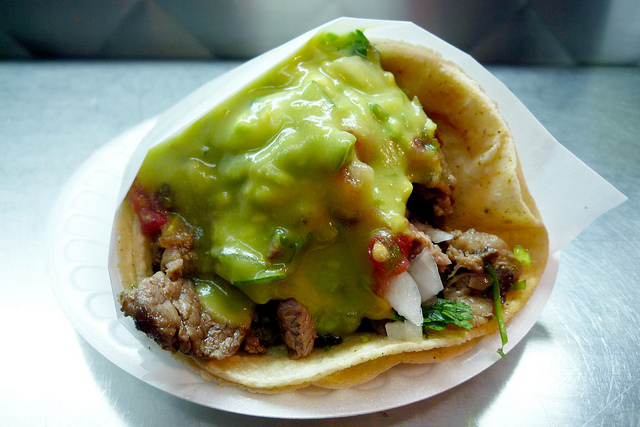 If Tonayense is the go-to taco truck of Mission denizens, El Gallo Giro is for the serious taco aficionados. And what El Gallo Giro lacks in name brand recognition, they make up for in killer taco quality. El Tonayense tacos scratch and itch; El Gallo Giro's tacos are the stuff of legend, the kinds of tacos you make multi-block detours for. There is no bad meat order here, too — perfect carnitas, decadent chicharrones, melt-in-your-mouth lengua, not to mention their roast chicken taco which is a favorite of Aziza chef Mourad Lahlou. Definitely load up on their tasty fresh salsas, too.
23rd and Treat 10:30-5 p.m., Monday to Saturday.

As a bona fide carnivore, I'm not one to award a spot on this list to a vegan (!) food truck lightly (not to mention the inevitable accompanying groans of "Ugh, sometimes San Francisco is just so San Francisco."). But Hella Vegan Eats is more than worthy of the honor. Slinging food that appeals to eaters of all stripes (except those who hate fried things, which, um, whatever), HVE will have you making all kinds of inappropriate food groaning noises thanks to udon bowls with fried avocado, "chicken" and waffles that are actually as good as the real thing, and a burrito stuffed with potstickers. I repeat: a burrito STUFFED WITH POTSTICKERS. Serious points for creativity, spice prowess, and consistently fantastic food.
Check out their calendar, and look for them at the Heart of the City Farmer's Market on Wednesdays and the Mission Community Farmers Market on Thursdays.

Sometimes, keeping it simple and straightforward is the best food truck strategy. Take Minnie Bell's — their classic soul food is delicious, comforting, and consistent. From a deeply-flavored gumbo (made with homemade stock, of course) to the addictively good rosemary fried chicken wings, this is the kind of food you crave (particularly on a foggy San Francisco day). And while we certainly don't mind the burrito-fication of everything, sometimes it's nice to have a killer food truck meal that tastes like tradition.
Hayes Valley Proxy on Saturdays. 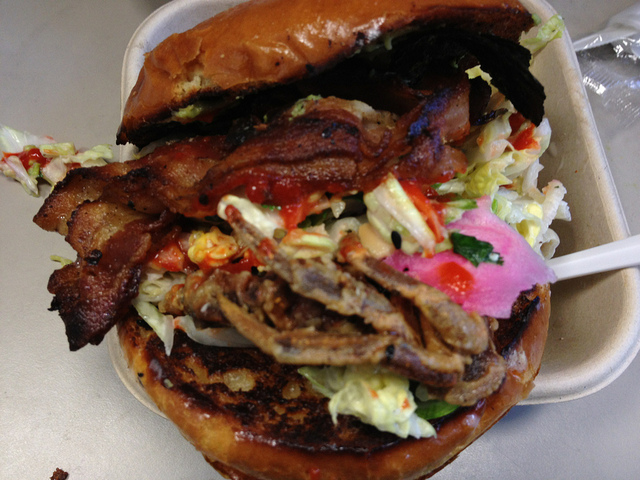 Considering the number of gonzoed-out fusion trucks in the city, we think it's worth highlighting one that does it right. Adam's Grub Truck isn't afraid to go big, and messy, with their creations — think fried chicken and pulled pork AND a runny egg, topped with a spicy-laced slaw and served on brioche (a.k.a. The Double Dragon) — but flavors remain balanced, and the overall effect is as delicious as it is decadent. We'd say to stick with the sandwiches, and add avocado wasabi to everything. And yes, $17 is a lot for a sandwich, but a sandwich featuring two fried soft shell crabs and bacon (called, yes, the Kraken) is something that you should treat yourself to at least once.
Check their site for locations, and find them at SOMA StrEat Food. 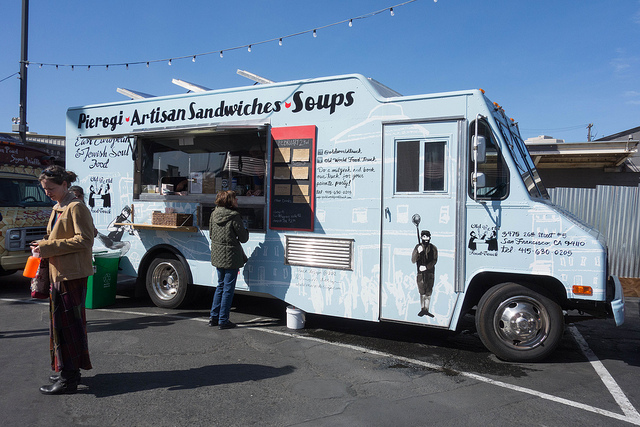 Can we take a moment to appreciate the rise of really good Jewish deli food in San Francisco? From Wise Sons to Rye Project, you can actually get a good reuben these days. On the mobile side of things, we love the Old World Food Truck, whose creations have just the right amount of old school flavor mixed with their own creative spins. Classics like the reuben and smoked whitefish sandwiches are right on, and we can't get enough of the chicken schnitzelwich, featuring a crispy-fried chicken cutlet, caraway honey, horseradish aioli, and cabbage slaw. Absolutely go for the chicken liver schmear addition — the rich and flavorful liver make it something of a bubbe-style bahn mi.
Truck Stop, Off The Grid Presidio Picnic, Haight, UN Plaza, and more.

Update: Per Old World Food Truck's website, tomorrow is its last day and you can catch it at Off the Grid on Haight Street. 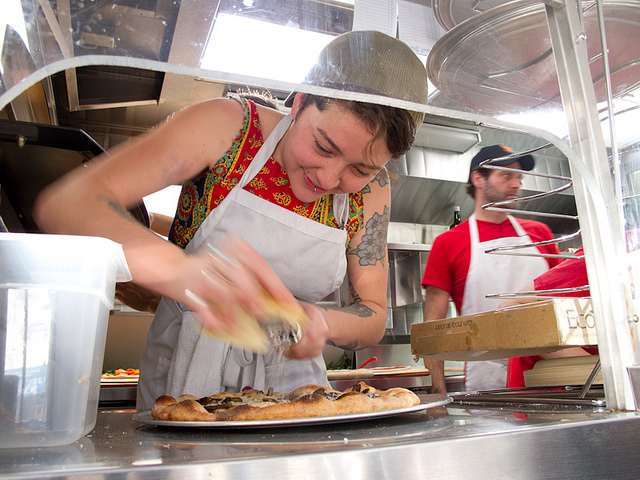 It may not have the sexy cache of Del Popolo, but Casey's is our pizza truck of choice. From a perfectly blistered, fresh and chewy crust to delicious changing toppings combos, this pizza is California-style done right. What to order? Anything featuring Zoe's pepperoni is fantastic, same with their bacon kale pie, and their weekends-only brunch pizza...oh god, don't make us choose! Your best bet is to hit Casey's with a group, order one of everything, and share.
Downtown Tuesday-Friday (specific locations here), and Off The Grid Twilight at the Presidio Thursday nights. 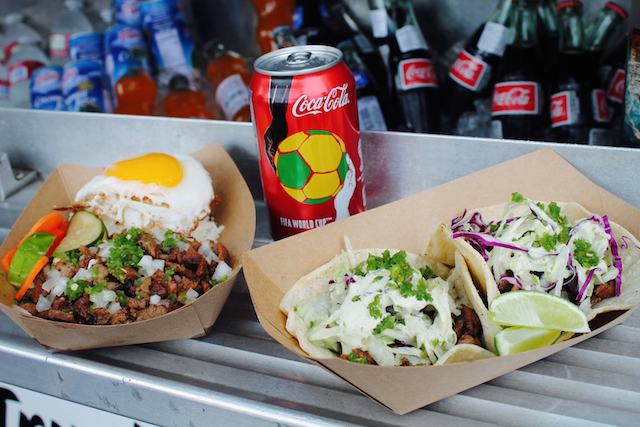 We don't think we've every seen the Senor Sisig truck without an intimidating-looking line in front of it (except maybe when it's driving away...devotees haven't resorted to chasing it down the street, yet). Having tasted the goods, though, we get it. This is burrito-(and taco)fication done right — wonderfully flavored Filipino-style meats are wrapped with Adobo-garlic rice, beans, pico de gallo, and stupid-good cilantro cream sauce. The pork is our go-to, but chicken and tofu are tasty, too. Their California burrito (with guac and fries, of course) is killer, but we find ourselves dreaming of the Tuesday-and-Thursday-only Tosolig burrito, stuffed with sweet pork, a runny fried egg, and topped with bracing pepper vinegar.
Downtown most days, at Off The Grid Haight and Fort Mason, and at SOMA StrEat Food. See specific times and places here. 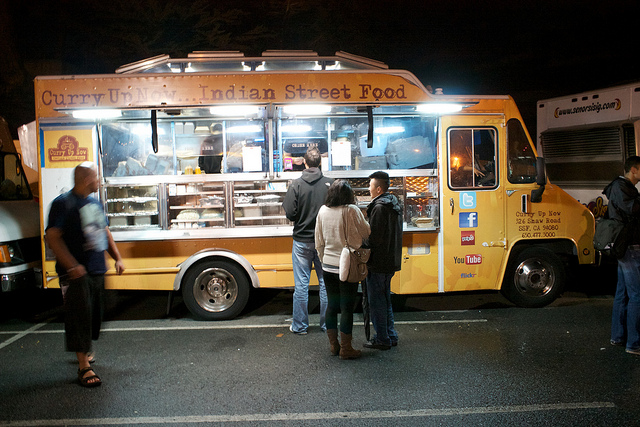 When it comes to fusion burritos, Curry Up Now was one of the first around these parts, and is still one of the best (as evidenced by their multiple brick-and-mortar locations). The chicken tikka masala burrito is as delicious as it sounds, but the samosa and tofu burrito is the real win here (particularly if you're after a food coma). It's vegan, flavorful, and um, stuffed with samosas which means it's basically perfect. Pair them with a side of lamb-topped sexy fries for good measure, and because you can.
Find the full truck schedule here. 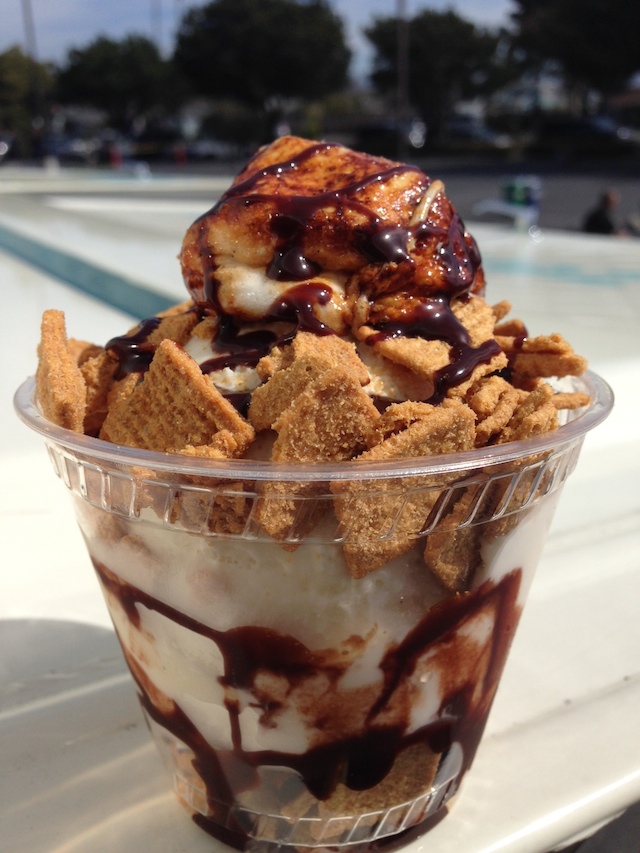 Have you had frozen custard? It's like soft serve's richer, smoother, better looking cousin. Thank goodness for Frozen Kuhsterd, who is not only filling the custard-shaped hole in our heart, but is doing so in a delicious, booze-laced fashion. In addition to those actually boozy flavors (Reposado tequila, spiked cereal milk), sample sinfully delicious flavors like maple butter, Thai iced tea, and Four Barrel coffee, topped with everything from condensed milk to cornflakes.
Find them at SOMA StrEat Food; full locations list here. 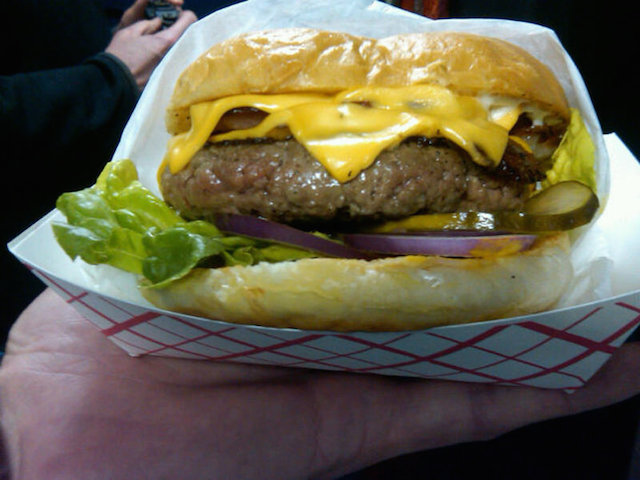 Fivetenburger is an East Bay-based truck (duh), but they've become a fixture in the San Francisco Off The Grid scene. And their burgers are so good that we couldn't not include them. Their 6 oz beef patties (you get your choice of grain and grass fed beef) are topped with cheese and house made pickles — you can add bacon and and egg, which of course you should. Truffled tots are as amazing as they sound, and we won't judge you even a little bit if you smush some on top of your burger. Oh, and they have an excellent grilled cheese sandwich for you non-meaters, and a delicious steak sandwich should you want your burger with a side of beef.
Off The Grid Haight and Fort Mason; get their full schedule on Facebook or Twitter. 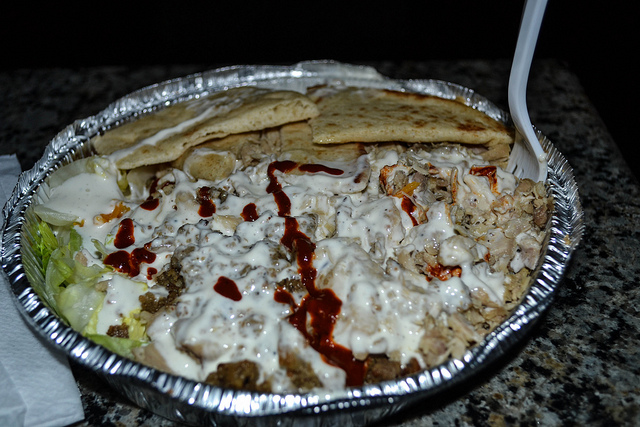 The spicy smell of halal carts is ubiquitous to New York, and one that San Francisco has sorely lacked until recently. The downtown Halal Cart is slinging chicken and lamb over rice, complete with yogurt sauce and wedges of pita. Comparisons to their East Coast counterparts are inevitable, but the San Francisco edition holds its own — plates are sizable and filling, the rice is buttery, and the meats are flavorful and satisfying. And, in our opinion, the lamb is actually superior to New York's. An exercise in nostalgia for some and brand-new street territory for others, we think the Halal Cart is on its way to being a new San Francisco classic.
455 Market Street, btwn Front & Bush, 10:30 a.m.-2 p.m.

A freshman at San Francisco's Sacred Heart Preparatory School was fatally stabbed yesterday, over what the school's head football coach says were "social media issues." 14-year-old Rashawn Williams was stabbed by an as-yet-unidentified

Mark Bright, partner and wine director at Saison (178 Townsend), is just about ready to unveil his new, down-the-street wine bar spinoff Les Clos (234 Townsend), which we previously talked about back in

—
The 12 Best Food Trucks in San Francisco: 2014 Edition
Share this